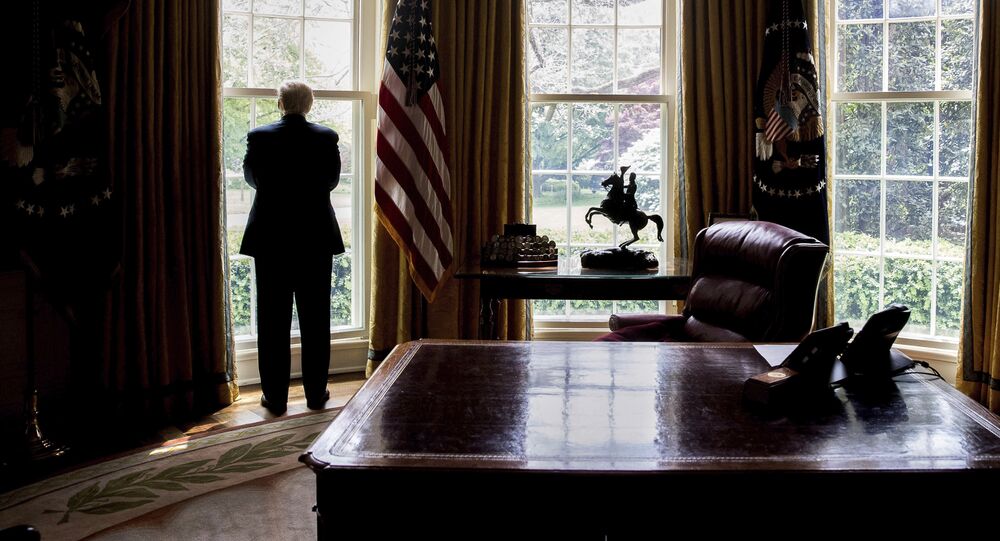 Here we go again... "US warns Syria over 'potential' plan for chemical attack" was the dramatic news headline which greeted me when I checked out the BBC News website first thing Tuesday morning, June 26.

A White House statement said that the US had "identified potential preparations for another chemical weapons attack by the Assad regime that would likely result in the mass murder of civilians, including innocent children." It added, "The activities are similar to preparations the regime made before its 4 April 2017 chemical weapons attack." The US made it clear that if the devilish plan, which it had "identified" was carried out, it wouldn't just hold the Syrian government responsible, but those other all-round "baddies" Russia and Iran too.

Where does one start with this hogwash? Does the US really think we've got all brains the size of gnats and memories that only go back to remembering what we had for supper last night? Or that we are stupid enough to believe that Assad would use chemical weapons in a war in which he is clearly winning?

Why would Assad do this when he has already consolidated power? It makes no sense.

Or accept as a "slam dunk" that it was the Assad government which used chemical weapons on Apri 7l- when it has most certainly yet to be proven? And here's award-winning investigative journalist Seymour Hersh's latest piece of work on that.

If your first reaction on reading the BBC headlines about the US "warning" was a sense of deja vu, you're not the only one. The world's number one rogue state routinely comes up with wild, unsubstantiated claims about the dastardly things target states are planning to do, or are doing, or have done, before it launches yet another illegal military assault.

In 2002/3 the White House told us repeatedly that Iraq had WMDs which posed a threat not just to the Middle East but to the entire world.

It was a total fabrication and up to 1 million people lost their lives in the resulting war. Four years earlier, the lurid claims involved Yugoslav forces committing genocide in Kosovo. Again, it was untrue — but the evocation of Nazi-era crimes enabled the US to "sell" to the western public its long-planned imperialistic war against a socialist state which had resisted globalization, as a "progressive" and "humanitarian" venture.

In 2011, we were told Muammar Gaddafi, who had ruled Libya since the end of the Swinging Sixties, was going to massacre the inhabitants of Benghazi. It was utter B.S. once more, but the US and its NATO allies got their way and Libya — a country with the highest Human Development Index in Africa was transformed into a failed state and playground for Daesh (ISIS/ISIL) and al-Qaeda.

Trump and company are lying through their teeth as a pretext to escalate the war on Syria. Just like the Obama administration before them. https://t.co/TEPlSOUChu

Now, it's Syria — (and their allies Iran and Russia too), which is in the line of fire.

Regime change in Damascus has long been an aim of the hawks in the US, but thanks to heroic Syrian resistance and the aid given to the country by its loyal allies, this is one neo-con operation that hasn't quite gone to plan. Despite the billions of dollars of weaponry that have been supplied to anti-government "rebels" by the US and their regional allies, the Arab Socialist Ba'ath Party is still in power. Not only that, but, "horror of horrors!", Syrian government forces are liberating towns and cities from western-backed terrorists.

It's clear that the only way the US, Saudi Arabia and Israel (where a government minister called for the assassination of Assad in May — and whose forces have carried out several attacks on Syrian forces in the Golan Heights in recent days), will get what they want is an all-out "kick every ass out there," US-led military assault on Syrian government forces. But for that to happen they need a casus belli — especially as the US-led "coalition" is supposed to be in Syria to be fighting the head-choppers of Daesh.

The timing of this week's "warning" about a "planned" Syrian government chemical weapons attack is highly revealing. As in the case with previous US attempts to escalate the conflict, it comes as the Syrian Arab Army is celebrating significant advances against Daesh and other terror groups.

Monday, June 26, the Syrian Arab News Agency (SANA), reported how the Syrian army had re-established control over the Al-Dolei'Yat area — on the borders of the Deir ez-Zor province with Homs. It sticks in the craw of the western regime changers — and their media propagandists — to see Syrian forces do well and recapture territory. Just remember the western Establishment's foaming-at-the-mouth  "outrage" when eastern Aleppo was liberated from al-Qaeda/al-Nusra jihadists in December.

Last night, in Britain, C4 News, which has acted as a cheerleader for Syrian "rebels" since the start of the conflict, referred to the "cocky" Assad. The Syrian President had earlier in the day been visiting disabled soldiers with his family in Hama. C4 News clearly wished he was holed up in a bunker like Saddam and Gaddafi — and awaiting summary "justice" administered by western "rebels" — for daring to defy Washington's warmongers.

It's obvious to any objective observer, that Assad — whatever your opinion of him — enjoys widespread support in Syria, and that too makes the west's regime-changers, who think they, and they alone, should dictate who runs the country, very angry.

When #ISIS is defeated, it will leave a power vacuum which must be filled by our allies and not Iran, the Assad regime, Hezbollah or others.

spoken like a true tyrant. @AmbJohnBolton decides who governs syria? but it cant be syrians. @VanessaBeeley @sahouraxo @RenieriArts https://t.co/Z2bP95SYIl

Syria's secular government, which protects Christians and other minorities, and is fighting against the same extremist forces which massacred civilians in terror attacks in Europe, simply cannot be allowed to win. The Syria-Hezbollah-Iran axis has to be broken. For the west's endless war lobby, the road to Tehran — and Moscow — goes through Damascus. The US "warning" also comes just a few days after the new French President Emmanuel Macron sought to change his country's hawkish position on Syria to a much more sensible one. Macron said he saw no "legitimate successor" to Assad.

"The real change I've made on this question, is that I haven't said the deposing of Bashar al-Assad is a prerequisite for everything," Macron told the Guardian. Macron's comments, that with under his Presidency, there would  "be an end to the kind neoconservatism imported into France over the last 10 years" will have worried the hawks in Washington. But significantly, he also said that the use of chemical weapons in Syria was a "red line" and would be "met with a response."

By announcing publicly that they have "identified potential preparations" for another chemical weapons attack in Syria, the US government is making its intentions very clear.

The global community must come together urgently to condemn and prevent any further US aggression in Syriahttps://t.co/GuzdSPMFaW

You don't have to be Hercule Poirot or Lt. Columbo to appreciate that the stage is now set rather conveniently for another "heinous" chemical weapons attack in Syria — carried out by western-sponsored "rebels," but blamed very quickly on "the evil child-murdering Assad," in order to give the US and their allies the pretext for waging their long-desired, all-out war with the Syrian government. Well, that certainly appears to be the plan, going on past history.

The good news though is that it can still be thwarted. Russia has come out strongly against the US statement, saying that the White House's warning to Syria and its allies was "unacceptable." If a major war is to be averted its essential that the US and its allies in the region understand that any attempt to escalate the conflict in Syria will be met with a powerful military response from the Syrian government and their allies. Note well that for all its bluster, the US still hasn't attacked North Korea, because it is frightened to do so. It must be made equally frightened about the consequences of an all-out regime change operation in Syria.

The lies used to justify US-led military aggression against target states are, let's face it, so transparent that a child of five could see right through them. Yet still they carry on telling them. Do they think we're stupid, or are the regime-changers at the stage of desperation now in Syria that they really don't care?