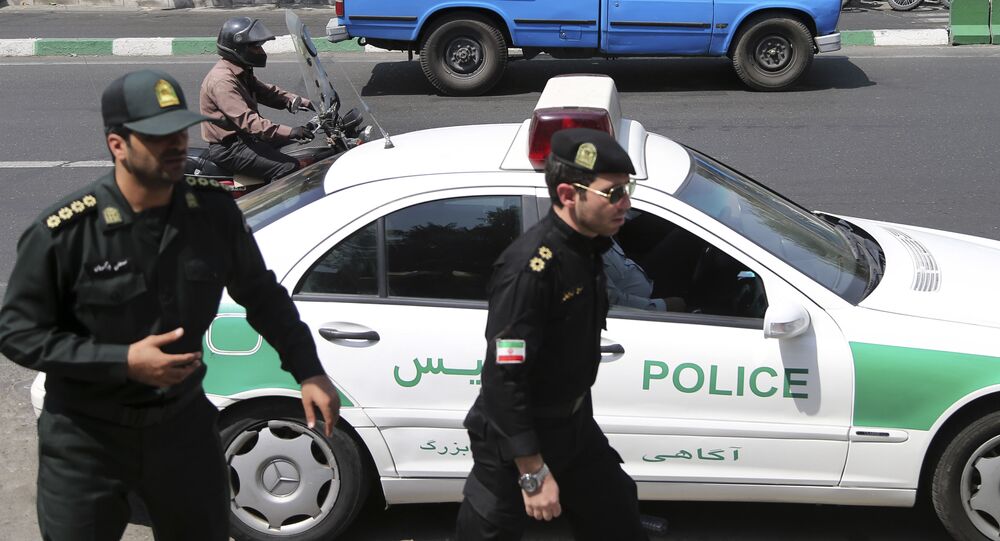 The Western Establishment would have the rest of the world believe that Iran is the “largest state sponsor of terrorism”, though in reality it’s been a major victim of terrorism for decades.

Iran has just been hit by multiple terrorist attacks in its national parliament and the revered Ayatollah Khomeini mausoleum, completely shattering the Western-promoted myth that the Islamic Republic is the “largest state sponsor of terrorism”. While cynics will inevitably suggest this might be a stereotypical case of “blowback”, the truth couldn’t be more different.

© REUTERS / TIMA
Daesh Claims Responsibility for Attacks in the Iranian Capital of Tehran
The only so-called “terrorist group” that Tehran directly supports nowadays is Hezbollah, which is only designated with such a false appellation because of its resistance to Israel. Iranian backing of the Houthi national liberation movement in Yemen is limited only to political, informational, and moral support, and there has yet to be presented any incontrovertible evidence other than hearsay that Tehran is arming the rebels, though Saudi Arabia says that they are and also calls the group “terrorists” simply because they ousted Riyadh’s political proxy in the country.

It’s unimaginable that either Hezbollah or the Houthis would dare stage such a horrendous terrorist attack against their partner, hence why the “blowback” argument falls flat on its face if anyone takes the time to think about it.

This logically brings one around to wondering which other forces could have been behind the coordinated strikes, and the one on everybody’s mind is Daesh, which threatened the Islamic Republic during last year’s Ramadan in what Iran described as “one of the biggest plots” ever.

If it was indeed Daesh which launched the latest attacks in Tehran, then it would mean that the ultra-sectarian group succeeded in carrying out its first-ever operation on Iranian soil against the majority-Shiite nation whose people it has officially condemned to death for being “apostates”.

It would also indicate that the group is dedicated to seeking revenge against Iran for its decisive support in helping the Syrian Arab Army cripple the terrorists in their own self-declared “caliphate”.

© AFP 2021 / FAYEZ NURELDINE
Clinton Emails Give Evidence of Saudi, Qatari Gov'ts Financing Daesh - Assange
Considering that Iran regularly accuses Saudi Arabia of backing Daesh, and pairing this accusation with Saudi Defense Minister Mohammed Bin Salman’s threat last month to take the regional proxy war to Iranian soil, it’s possible that Tehran could also interpret the latest events as Riyadh’s informal declaration of Hybrid War against the Islamic Republic, which in that instance could contribute to an even more tense situation in the region coming on the heels of the recently revived Qatari-Saudi Cold War. In any case, and regardless of which group carried out the terrorist attacks and whoever their foreign backers may or may not have been, it wouldn’t be the first time that Iran has fallen victim to terrorism.

Just last year Iran announced that the “Kurdish Democratic Party of Iran” (KDPI) carried out attacks against the Islamic Revolutionary Guard Corps along the western borderland region with Iraqi Kurdistan, and the country’s media pulled no punches in describing the perpetrators as terrorists.

This might sound strange to Western ears accustomed to hearing nothing but praise for Kurdish militant groups in the Mideast given the media-driven myth surrounding their anti-Daesh operations, but in reality the situation is much more complex. Individuals ordinarily sympathetic to these ethnic forces in general might be surprised to learn that the KDPI condemned Iran last year as the “Shiite ISIS”, which explains why Tehran takes such a strict attitude towards the group in designating it as the terrorists that they truly are.

Moving back along the timeline, most people shouldn’t have forgotten about the spate of assassinations against Iranian scientists during the height of the country’s nuclear energy standoff with the West.

Tehran blamed the US and Israel for these killings, and The Jerusalem Post published an article in August 2015 titled “Israel Behind Assassinations Of Iran Nuclear Scientists, Ya’alon Hints”, suggesting that the then-Israeli Defense Minister slyly let the cat out of the bag in an interview that he had just given during that time to Germany’s Der Spiegel. Tel Aviv never formally took responsibility for killing civilians in Iran, though it has consistently condemned the country’s nuclear energy program and its Mossad intelligence agency is widely regarded as having both the capabilities and motive for doing so.

© AP Photo / Lukasz Szelemej, file
Qatari Conflict: 'Proxy Battle Between Iran and Saudis Going to the Next Level'
Speaking of Western support for terrorism against Iran, Tehran claimed on multiple occasions that the “People's Mojahedin Organization of Iran” (known as Mojahedin-e Khalq and commonly reported on by its acronym MEK) is being backed by the US and its allies. The organization was patronized by Saddam Hussein’s Iraq during the 1980s when it carried out a spate of attacks against the Islamic Republic, and had previously been designated a terrorist group by the US until 2012 for its killing of six Americans in the 1970s.

Iran believes that the US took the MEK off of the State Department’s list of terrorist organizations because it’s planning to use it as a Hybrid War vanguard against the Islamic Republic in the future, and interestingly enough, former Saudi spy chief Prince Turki al-Faisal addressed the group’s large-scale public gathering in Paris last year where he implored them to seek regime change against Iran.

Finally, when speaking about the MEK and its reference to Saddam Hussein, there’s no avoiding the fact that the Iran-Iraq War (or First Gulf War) was an act of brutal state terrorism by Baghdad against the fledgling Islamic Republic launched in the tumultuous year following its 1979 Revolution.

Hundreds of thousands of Iranians lost their lives in what amounts to their version of the Soviet Union’s Great Patriotic War, though they ultimately succeeded in preventing their country’s disintegration at the hands of its foreign enemies.

© AFP 2021 / Ramzi Haidar
Condoleezza Rice Goes Straight: US Invaded Iraq to Topple Saddam Hussein, Not to Bring Democracy
Iran has therefore suffered from terrorism much more than most of the world recognizes, which makes the West’s accusations that the country is the world’s “largest supporter of terrorism” absolutely ridiculous to even countenance.

The latest attacks in the country’s parliament and Ayatollah Khomeini mausoleum are a testimony to this fact, and should give cause to all serious Great Powers to unite behind Iran in its War on Terror if they truly aspire to see this global scourge eliminated once and for all.