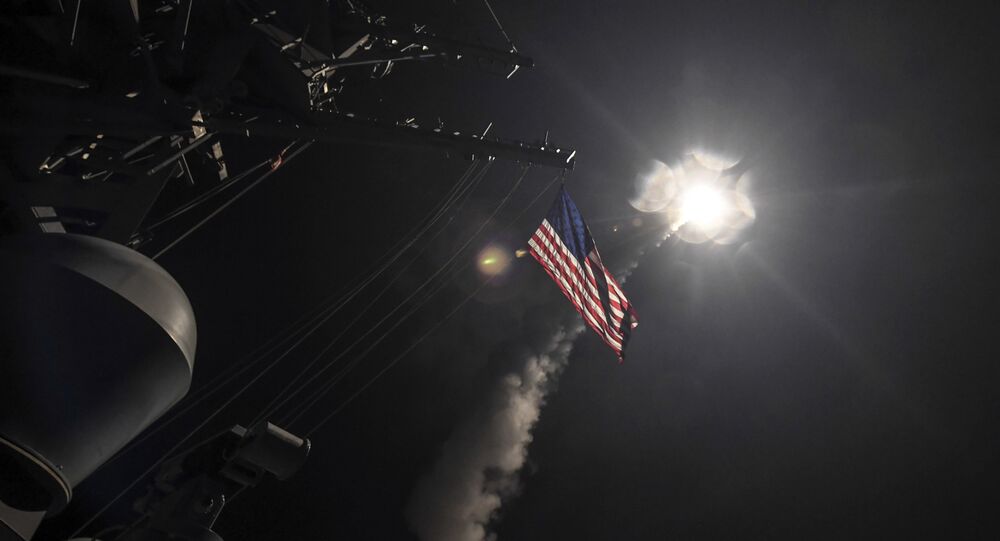 So the brash, big-mouth tycoon in the White House with an outsized ego has finally unleashed the dogs of war in Syria.

Invoking God and the suffering of “little babies”, the supposed US Commander-in-Chief Donald Trump ordered the bombing of Syria with cruise missiles launched from warships in the Mediterranean.

© REUTERS / Bassam Khabieh
Pentagon's Massive Airstrike: This 'Senseless Move Will Lead to More Chaos' in Syria
A Syrian airbase was destroyed, along with several casualties, and civilians reportedly among the dead.

This was while Trump was digesting a dinner of steak and carrots in his Florida beach resort on Thursday night.

Trump has styled himself as a hard-nosed and “unpredictable” American president.

The bitter irony here is that everything Trump is doing in his latest act of illegal war is actually so predictable.

The US political establishment – driven as it always is by the imperative need of waging wars to shore up its crumby capitalist economy – has been baying for all-out deployment in Syria for the past six years.

© Sputnik / Mikhail Voskresenskiy
Pentagon's Airstrike in Syria: Trump 'Needs a Swift Victory to Resolve' Domestic Issues
Since Washington instigated its criminal regime-change operation against the sovereign government of Syria in March 2011, the hawkish establishment was never quite satisfied with the strategy of using proxy terror groups to do the dirty work. Direct military intervention to topple the Syrian state has always been on the cards as the preferred method.

The Deep State establishment – or the War Party comprising both Republicans and Democrats in hock to the military-intelligence apparatus – thought they would get their way with the election of warmonger Hillary Clinton last November. Alas, the surprise election of Trump to the presidency temporarily upset their militarist agenda.

But the advent of Trump to the White House was only a hitch for the powers-that-be. The relentless Deep State-driven media witch-hunt against Trump over ridiculous allegations of being a Russian puppet has evidently prevailed.

Trump, the self-declared “outsider” has been forced to prove that he is an “insider”, an obedient poodle to the American war Rottweiler – if he wants to stay in office and see out the next four years without being impeached.

In order to survive the pressure over “Russian stooge” allegations, Trump is throwing some meat to the US War Party by giving them their long-sought-after direct military intervention in Syria.

Trump’s order to blast Syria with 59 cruise missiles is a brazen act of war that makes a mockery of international law. Russia and some other independent nations have denounced the US “act of aggression against a sovereign state”.

© AP Photo / Frank Franklin II
UNSC Holds Emergency Meeting on US Missile Attack in Syria (VIDEO)
The fact that Russian forces were stationed at the targeted airbase at Shayrat – but were reportedly unscathed – is a shocking sign of how reckless the latest American military action is. If Russian personnel had been killed, then that would potentially be cause for a full-scale war between two nuclear powers.

Mary Ellen O’Connell, a US-based law scholar at University of Notre Dame, Indiana, was quoted by the Guardian saying there was “zero legal basis” for Trump’s missile attack. She said it was an unfounded act of aggression.

Even some members of the US Congress have questioned Trump’s unilateral action as being unconstitutional since he did not receive authorization from Congress, as required by American law.

But these are piffling, academic concerns when it comes to how the US always behaves. International law is only a selective rhetorical device for a rogue state that considers itself above the law.

© AFP 2021 / Ford Williams/U.S. Navy
Сoincidence? Daesh Militants Attacked Syrian Army Positions Simultaneously With US Strike
As Russian military spokesman Igor Konashenkov remarked, the US has been waging wars regardless of international law for decades based on concocted pretexts, as in Serbia (1999), Afghanistan (2001), Iraq (2003), Libya (2011), and now Syria.

Trump has finally bought into the US war agenda in Syria – despite mouthing off against such an intervention as far back as 2013 – in order to keep his seat in the Oval Office. The intense media pressure from the witch-hunt over Russia has seen to that, in part.

The next prop in the whole despicable drama was Trump’s gullibility over the latest false flag involving chemical weapons in Syria earlier this week.

Anyone with a bit of wit can see that the CIA-trained and Turkish, Saudi-supplied terrorist proxies carried out the massacre of civilians from their own toxic arsenal. The CIA-trained bandits tried the same deadly stunt back in August 2013 when they gassed hundreds of children near Damascus and videoed the horror for Western media dissemination.

The same profane ploy was used again this week in the town of Khan Sheikhoun, in Syria’s northern Idlib province.

The truth is simple: the Syrian army does not have chemical weapons, after they were destroyed as part of a Russian-brokered decommissioning deal back in 2013. The only party to have access to such weapons are the Western, Turkish and Saudi-backed terror groups.

© AP Photo / Ford Williams/U.S. Navy
US Missile Attack: Not First Time Pentagon Strikes Syrian Army, More to Follow?
Like the propaganda service they are, the Western mainstream media then dutifully blasted the “news” that the Syrian air force dropped chemical weapons on Khan Sheikhoun – willingly and unquestioningly using the images and video supplied by “activists” affiliated with the jihadist terror groups.

When US ambassador to the UN Nikki Haley stood up in front of the Security Council holding photographs of dying children – purportedly from poisonous gas – she was role-playing for the false flag.

As with the general Western media response, Haley’s display had the unmistakable air of choreography. It was 2003 all over again, when then Secretary of State Colin Powell lied to the Security Council about weapons of mass destruction in Iraq, while brandishing dud vials of “lethal chemicals”.

It is not clear whether Trump or his ambassador to the UN Nikki Haley are merely gullible or something more sinister, such as willing accomplices in a charade.

But the upshot is this: Trump is acting like an obedient poodle going along with the Machiavellian American power system. Invoking God and suffering babies is just a shallow moral cover for his complicity in another US criminal act – in a countless list of such crimes down through history.

© REUTERS / Carlos Barria
Ghost of Christmas Past: In 2013 Trump Publicly Warned Obama Not to Attack Syria
There is something fitting about Trump’s background as a real estate billionaire. That business is all about shafting people, cheating to stay ahead, or selling overinflated assets.

Trump himself is one such overinflated “asset”. All his past talk about “America first”, “forgotten workers”, “draining the swamp” and lashing out against his predecessor Barack Obama over “reckless wars in the Middle East” – is all just cheap hokum.

To save his political skin and no doubt lucrative future business opportunities for his dynasty, Trump has donned the cap of Commander-in-Chief and is groveling before the American war machine.

He is handing over an “official” license for war in Syria that the American Deep State has been craving for years.

It is a measure of how crazed and obscene the American political system is. The message is: no matter which way the electorate votes, the warmongers in the Pentagon and their corporate masters get the result they want. Which is war. Even if that risks a world war with Russia.

That’s how American capitalism works. And Trump is nothing but a poodle willing to jump through the hoops, roll over and lick the boots of the criminal masters.