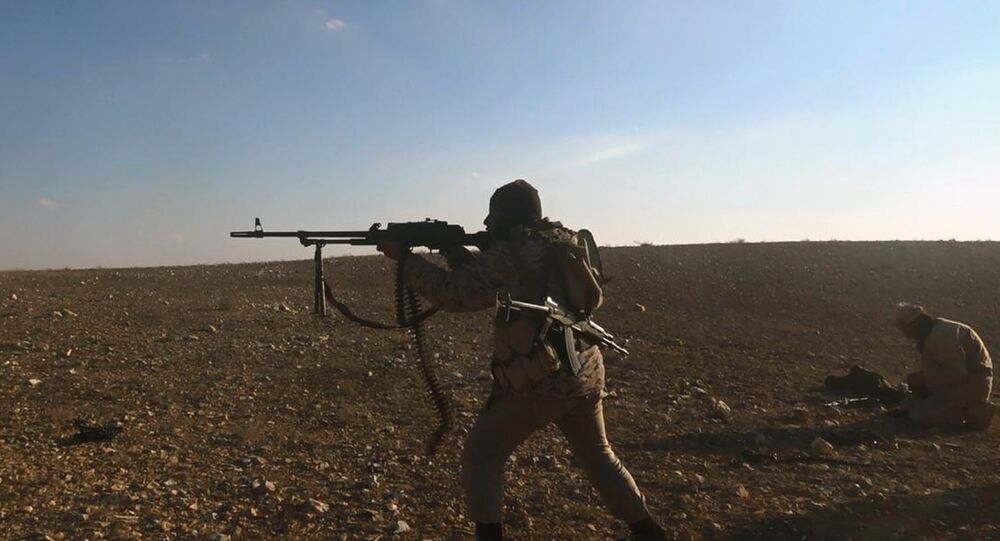 Daesh, Creature of the West

James Shea, Deputy Assistant Secretary of Emerging Threats at NATO – now that’s a lovely title – recently gave a talk at a private club in London on the Islamic State/Daesh. Shea, as many will remember, made his name as NATO’s spokesman during the NATO war on Yugoslavia in 1999.

After his talk Shea engaged in a debate with a source I very much treasure. The source later gave me the lowdown.

According to Saudi intelligence, Daesh was invented by the US government – in Camp Bacca, near the Kuwait border, as many will remember — to essentially finish off the Shiite-majority Nouri al-Maliki government in Baghdad.

© AP Photo / Khalid Mohammed
Military Training in Iraq Fails, Militants Stronger, US Officials Say
It didn’t happen this way, of course. Then, years later, in the summer of 2014, Daesh routed the Iraqi Army on its way to conquer Mosul. The Iraqi Army fled. Daesh operatives then annexed ultra-modern weapons that took US instructors from six to twelve months to train the Iraqis in and…surprise! Daesh incorporated the weapons in their arsenals in 24 hours.

In the end, Shea frankly admitted to the source that Gen David Petraeus, conductor of the much-lauded 2007 surge, had trained these Sunnis now part of Daesh in Anbar province in Iraq.

Saudi intelligence still maintains that these Iraqi Sunnis were not US-trained – as Shea confirmed – because the Shiites in power in Baghdad didn’t allow it. Not true. The fact is the Daesh core – most of them former commanders and soldiers in Saddam Hussein’s army — is indeed a US-trained militia.

True to form, at the end of the debate, Shea went on to blame Russia for absolutely everything that’s happening today – including Daesh terror.

© AFP 2021 / AWAD AWAD
Will Saddam Hussein's Ghost Join the Fight Against Daesh?
Now let’s go back to the proclamation of the Daesh Caliphate in June 29, 2014. That was choreographed as a symbolic abolition of the Sykes-Picot border that split the Middle East a century ago. At the same time, abandoning the option of a military push to take Baghdad, Daesh chose to regionalize and internationalize the fight, creating their own transnational state and denouncing regional states as “impostors”. All that coupled with the amp up of any chaos strategy capable of horrifying Western public opinion.

For large swathes of a Sunni Arab audience, this was powerful stuff. Daesh was proclaiming themselves, in a warped manner, as the sole real heir of the different Arab Springs; the only totally autonomous regional movement, depending exclusively on its own local base, made up of numerous Bedouin tribes.

But how did we get here?

© Flickr / Wikileaks Mobile Informatio
Dig In! WikiLeaks Publishes Hillary Clinton's Iraq War Emails
Let’s go back once again – now to Iraq in the 1990s, during the Clinton era. The strategic logic at the time spelled out an instrumentalization of UN resolutions — with Washington de facto controlling Iraq’s oil, manipulating the price as a means of pressure over trade competitors much more dependent on Iraqi oil such as China, Japan and selected European nations.

9/11 turned this state of affairs upside down – leading to the 2003 neocon ideological stupidity and subsequent amateurism managing an occupation in total ignorance of history and the ultra-complex dynamics between the Iraqi state and society. Saddam Hussein was the de facto last avatar of a political arrangement invented by imperial Britain in 1920. With the invasion and occupation, the Iraq state collapsed. And the Cheney regime had no clue what to do with it.

There was no Sunni alternative. So Plan B, under major pressure by Shiites and Kurds, was to give voice to the majority. The problem is political parties ended up being religious and ethnic parties. The partition of power, Lebanese-style — Shiites, Sunnis and Kurds – turned out to be a dysfunctional nightmare.

Between 2005 and 2008, this American attempt to rebuild the Iraqi state yielded a horrendous confessional civil war between Sunnis and Shiites. The Sunnis lost. And that largely explains the subsequent success of Daesh in creating a “Sunniland”.

The US occupation-Arab Spring love affair

Now let’s turn to the Syrian version of the Arab Spring in February/March 2011. Initial protests against Assad’s iron rule were peaceful – multi-communitarian and multi-confessional. But soon anti-Alawite rancor started to radicalize a significant part of the Sunni majority.

© AP Photo / Khalil Hamra
Americans 'Clearly Know' That US-Made Weapons Now in Hands of Syrian Terrorists
As historian Pierre-Jean Luizard, a specialist in Iraq, Syria and Lebanon at the French CNRS reminds us, Syria was the favorite land of Hanbalism – a most conservative branch of Sunni Islam that highly influenced the emergence of Wahhabism in the Arabian Peninsula. That implies a virulent anti-Shiism. Thus the emergence among the Syrian armed opposition of multiple Salafi-jihadi groups, most of all Jabhat al-Nusra – a.k.a. al-Qaeda in Syria.

So it’s fair to argue that both US occupation and the Syrian Arab Spring ended up producing the same result. With some differences; in Iraq, Daesh enjoys the (silent) support of a majority of Sunni Arabs. In Syria, Sunnis are divided; Daesh may rule the desert — Bedouin culture, but it’s Jabhat al-Nusra that captured significant Sunni support in big urban centers such as Aleppo. In Iraq, the borders between the three large communities – Sunni, Shiite, Kurd – are more or less frozen. In Syria, it’s a never-ending jigsaw puzzle.

What happens next is a mystery. The de facto independence of Iraq Kurdistan may solidify. The Baghdad government may increasingly represent only Shiites. Yet it’s hard to see Daesh consolidating its control of Sunni Iraq – not with the ongoing Battle of Mosul.

Blowback rules the wilderness of mirrors

It’s easy to dismiss Daesh as the apex of barbarian cultural idiosyncrasies. Even wallowing in gruesomeness, Daesh has been able to project a universalist dimension beyond its Sunni Arab Middle Eastern base. It’s like the clash of civilizations playing in a wilderness of mirrors. Daesh amplifies the clash not between East and West, or the Arab world and the Atlanticist hegemon, but mostly between a certain (warped) conception of Islam and assorted infidels. Daesh “welcomes” everyone, even Catholic Europeans while persecuting Arab infidels and bad Muslims.

It’s no wonder the Caliphate — a concrete utopia on the ground – finds an echo among young lone wolves living in the West. Because Daesh insists on the colonial Franco-British – and then neocolonial American — history of Muslims being trampled upon by a dominating, infidel West, they manage to channel a diffuse sentiment of injustice among the young.

© Photo : Saudi Press Agency
Squeezed Out of Syria, Daesh's Next Target Could Be the House of Saud
Everyone – US, France, Britain, Russia, Iran — is now at war with Daesh (Turkey only half-heartedly, as well as the House of Saud and the GCC petrodollar gang; for them this not a priority.)

But this is a war without a serious political long-term perspective. No one is discussing the place for Sunni Arabs in an Iraq dominated by the Shiite majority; how to put the Syrian state back together; or whether private donors to Daesh from Kuwait, Qatar, Saudi Arabia and the Emirates will simply disappear.

The encirclement of Raqqa and the re-conquest of Mosul will mean absolutely nothing if the causes of Daesh’s initial success are not addressed. It starts with the West’s mission civilisatrice as the cover story for unbounded colonial domination, and it straddles the methodical, inexorable, slow motion American destruction of Iraq. Blowback will continue to reign over the wilderness of mirrors; an attack near the British Parliament by a knife-carrying lone wolf “soldier answering “its call” killing four people mirrored by US jets bombing a school near Raqqa killing thirty-three civilians.

Petraeus may have trained them in the deserts of Al-Anbar. But most of all that rough beast, slouching towards Camp Bacca to be born, bore the touch of a Western mind.