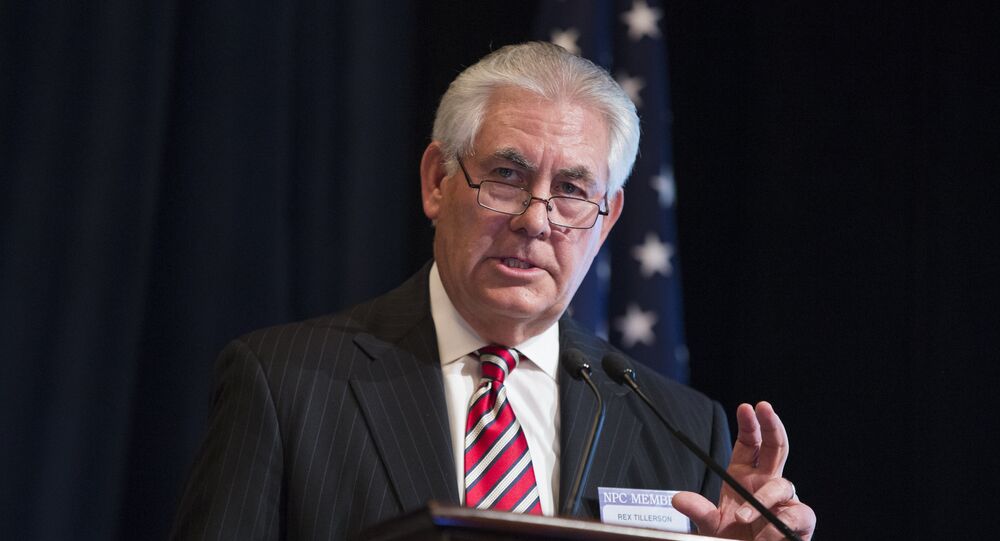 Credible reports have been circulating over the past couple of days suggesting that President-elect Trump will tap ExxonMobil CEO Rex Tillerson as his nominee for Secretary of State.

A lot has already been written since then about how this global businessman, who has an excellent working relationship with Russian President Vladimir Putin, could greatly facilitate a rapid rapprochement between the US and Russia, thereby ushering in a New Detente in the New Cold War. Comparatively less time, however, has gone into contemplating what this energy tycoon's appointment would mean for the future role of the US oil and natural gas industries.

© Sputnik / Alexei Druzhinin
Trump's State Dept Pick Uniquely Placed to Get US-Russia Relations Back on Track
The US is already a leading energy superpower because of fracking, despite the heavy environmental consequences that this extraction method has and its related hydrological unsustainability, and Trump is expected to apply this as a foreign policy instrument during the course of his upcoming Presidency. He displayed a very favorable attitude to fracking during the campaign season, and he also spoke about the need for the US to lessen its perceived energy dependency on the Mideast. Taken together, these two objectives are predicted to converge with the politicization and weaponization of energy supplies, which is ironically exactly what the US has accused Russia of doing all throughout the 2000s.

The basis for this forecast isn't just the author's subjective interpretation of Trump's energy and foreign policy statements, nor the general direction that the US is moving in to weaponize whatever it can through Fifth-Generation Warfare, but the curious comment that Texas Republican Congressman Pete Olson told Sputnik over the weekend. Commenting on the deal that OPEC reached among most of its members and a few important non-members as well, he out-of-the-blue suggested:

"How about this idea called NAPEC, the North American Petroleum Exporting Countries?"

© Sputnik / Michael Klimentyev
Trump's Team Touts Tillerson's Business Ties With Russia as Big Plus for the US
Reflecting on Olson's words, it's indeed possible for the US, Canada, and Mexico, each of which have substantial energy reserves and are already economically integrated through NAFTA, to pragmatically deepen their cooperation even further in forming NAPEC.

What's more, since ExxonMobil is a significant investor in each of the three countries' deposits, it's only natural that company CEO and presumed Secretary of State nominee Tillerson could lead the way in this regard if he's confirmed by the Senate.

In aggregate, the union of these three players would be a powerful driving force in influencing the global markets, and it could very easily grow to rival OPEC itself. Moreover, there's the very real potential that it could include parts of South America as well in creating what the author has coined as NASAPEC, or the North American-South American Petroleum Exporting Countries.

The US already exercises renewed hegemony over South America as a result of what the author terms Operation Condor 2.0, the pan-continental regime change process that Washington has been pursuing in the southern landmass all throughout the Obama Presidency. This was explained a bit more in detail in the Katehon article "Fidel's Farewell And The Future Of The US-Cuban Rapprochement", but the gist is that the US covertly had a role in orchestrating Paraguay's 2012 'constitutional coup', the 2015 electoral defeat of Kirchner's hand-picked successor (through intense information warfare and 'vulture fund' structural preconditioning), and the 2016 Brazilian 'constitutional coup' of President Dilma Rousseff.

As a result, two of South America's most promising oil and natural gas frontiers — Argentina and Brazil — are now firmly under US proxy control due to their right-wing reactionary governments' predisposition to their Washington patrons. The former is believed to possess massive fracking deposits in the western regions, whereas the latter already uncovered billions of barrels of oil under the Atlantic midway through the last decade. If their energy reserves were pooled together with NAPEC's to form NASAPEC, then it would dramatically deepen the US' hold over these countries but also relatedly catapult them all to becoming world-class energy players, provided, of course, that the resources can be extracted at the level that optimistic analysts believe.

© Sputnik / Ramil Sitdikov
What Russia Should Expect From Trump Secretary of State Pick Rex Tillerson
With this stratagem in mind, the Hybrid War on Venezuela takes on a qualitatively new meaning since it can now convincingly be argued that the USA might also have designs on forcibly incorporating the Bolivarian Republic into this proposed organization and pulling it out of OPEC, which would thus place the world's largest untapped oil reserves under Washington's control and immensely boost the global geopolitical prospects for NASAPEC.

In the event that the US, Canada, and Mexico consolidate into NAPEC and institutionally expand their control over the "SAPEC" of Argentina, Brazil, and Venezuela to form NASAPEC, then the global energy system would be shaken to its core and the Western Hemisphere would suddenly emerge as a powerful center of gravity in affecting the worldwide markets. Such a development could possibly compel Russia and Saudi Arabia, and Russia and OPEC more broadly, to expand their nascent cooperation out of hemispheric self-interest, which could interestingly provide more avenues (and potentially yet another breakthrough in the long run) for Moscow's Mideast grand strategy.