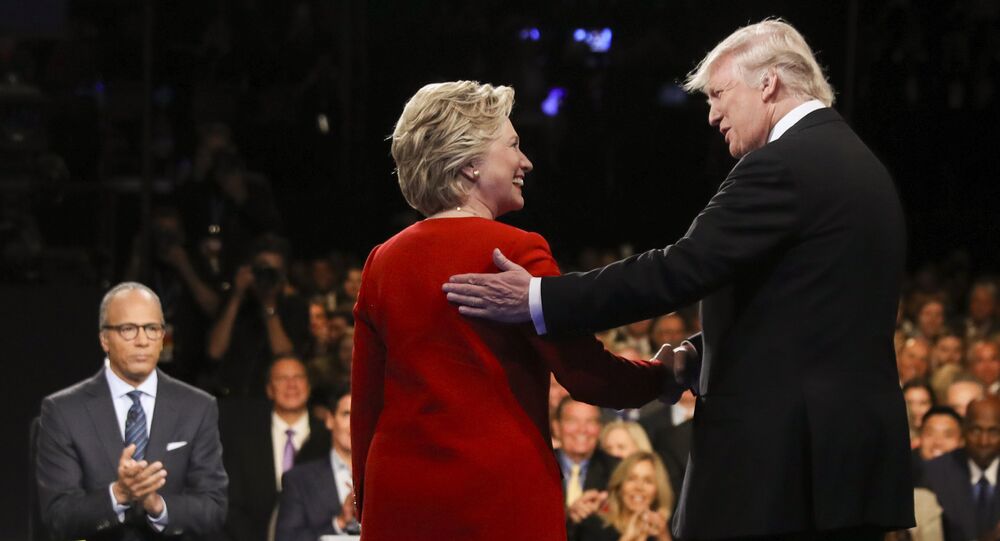 The spectacular demise of the Clinton (cash) machine-captured, neoliberalcon Democratic Party, when faced to the Trump phenomenon, would necessarily entail a radical reorientation to appeal, once again, to its natural constituency – US labor and progressive reformers.

Michael Hudson forcefully argues that’s the only way out; “Are they to stand by and let the party be captured in Hillary’s wake by Robert Rubin’s Goldman Sachs-Citigroup gang that backed her and Obama?”

© AP Photo / Manuel Balce Ceneta
George Soros, US Democrats Plot Anti-Trump Resistance Movement
Hudson stresses that for Democrats, it’s back to good old “it’s the economy, stupid”, or nothing. A delicious contradiction applies. “It’s the economy, stupid” happened to be Bill Clinton’s top winning mantra in the go-go 1990s. In 2016, Bill Clinton was ostensibly ignored by the Podesta-handicapped (via WikiLeaks) Clinton campaign.

On top of it, according to Hudson, reversing the neoliberal obsession entails “going back to Bill Clinton’s pro-Wall Street administration” to finish the job. The only hope for the Democrats is “to do what Britain’s Labor Party did by cleaning out Tony Blair’s Thatcherites.”

A New York business/investment source with extensive connections inside the US establishment who called the election for Trump weeks before the fact proposes a radically different approach.

“Trump should meet with Bill Clinton to go over his ideas on how to sponsor innovation which drives the economy into new industries that made the Clinton presidency so successful. He left office with a 65% approval rating despite the Monica Lewinsky scandal. Bill told me he created the dot.com era on purpose to finance innovative ideas, and did not care if 98% of the new startups failed, as long as the remaining 2% drove the economy upward.  It was so successful that Clinton left massive budget surpluses that Bush Junior destroyed in mad wars. Can you imagine spending three trillion dollars to find one man in Afghanistan or imaginary weapons of mass destruction in Iraq?”

And that brings us to Carroll Quigley; “Quigley was Bill Clinton’s teacher, mentioned in his inaugural address. He wrote a very important work, The Evolution of Civilizations, on the importance of technological advances in pushing an economy forward.  It is very boring but important.  When I discussed it with Bill I had just read it but he knew it by heart.  He said the book was the foundation of his entire political career.  Bill said the key is figuring out how to drive innovation forward based on the institutional bias against change.”

Bill Clinton would have no problems convincing Trump to stress the need for innovation to drive the US economy — always taking into consideration that technological advance (as in robotics) do not necessarily create more jobs.

But another thing entirely would be for Bill to admit that Wall Street casino capitalism must be controlled; after all he opened the Pandora’s box himself. The source recommends Trump to do exactly the opposite:

“The simple solution is to separate bank lending from all other activities, as Glass-Steagall mandated.  Banks should not be trading in foreign exchange, derivatives, etc.  Banks should make loans only to factories. The key is to force the Fed to only allow lending by banks for productive investment and not speculation. I would end all bank lending on margin. In addition, the SEC should be assigned the task of reviewing the use of cash settlement to manipulate the markets.”

Call it a taller order than Trump Tower.

© REUTERS / Jim Urquhart
Vast Majority of Americans Believe US Election Media Coverage Was Biased
As much as 47% of Americans eligible to vote did not bother to on November 8. Trump had roughly 25.5% of the eligible electorate vote, in fact less than Hillary Clinton’s 25.6%. That translates into a de facto mandate of roughly one-fourth of Americans. Overwhelmingly popular it is not. The key question is whether Trumponomics will be able to stare down and at least subdue the most savage aspects of unbridled neoliberalism.

Mike Davis, author of the seminal City of Quartz and Planet of Slums, argues that it is impossible to unify the economic distress of millenials with the angst of older white workers. He sees the solution not in “Trumpism”, but in “democratic socialism” reigniting a New New Deal, a true “Economic Bill of Rights”. Not a chance the Republican-dominated Capitol Hill will let Trump pull off a neo-FDR stunt.

Noam Chomsky is more pragmatic. He has registered how “the immediate reaction of the business world reveals that Big Pharma, Wall Street, the military industry, energy industries and other such wonderful institutions expect a very bright future.”

At least there is a “yuge” positive; Trump’s proposed $1 trillion infrastructure program – mirroring what China has been doing for over a decade. Chomsky notes that’s essentially the Obama stimulus program killed by Congress under the pretext it would explode the deficit. A much bigger explosion is on the cards if Trump gets his way, considering his proposed “radical tax cuts for the rich and corporate sector and increased Pentagon spending.”

There are, though, two options. One is to simply ignore the ballooning deficit, according to the Dick Cheney maxim "Reagan proved that deficits don't matter". The other option is a variation of the same, as proposed by Ellen Brown; print all the money you need to build all the infrastructure you need.

Wall Street voted en masse against Trump. Bill Clinton was the Father, Son and the Holy Ghost for Wall Street. As “Left” and “Right”, “”progressive” and “populist” are now labels smashed to utter meaninglessness, perhaps cajoling Bill Clinton to stop by Trump Tower is not exactly a bad move.

Clinton’s Lead Over Trump in US Popular Vote Exceeds 1Mln