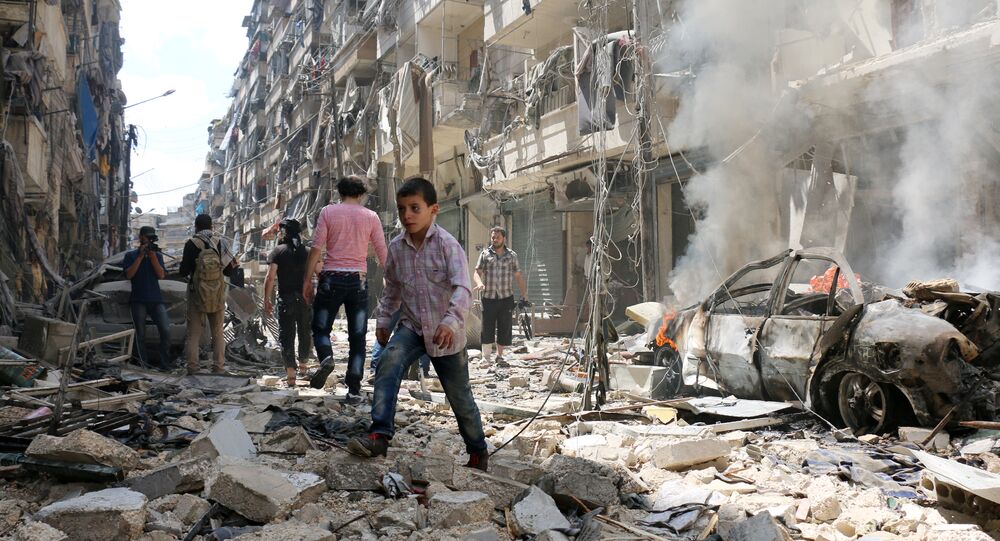 We really have entered a macabre twilight zone when US-led warplanes are massacring civilians in several countries – and yet Washington and its allies condemn others for war crimes.

© AFP 2021 / DELIL SOULEIMAN
What Lies Behind Claims of US-Russia Clash in Syria
Of course, governments that act criminally cannot be expected to be honest. But what about nominally independent organizations like the United Nations and Western media? The collective deception is damning of systematic complicity.

What makes it more disturbing is that if criminality can be so capriciously covered-up by institutions that are relied upon for law and accountability then the world really is in a dangerous, dark place.

The latest atrocity involved US coalition aircraft reportedly killing 15 women and injuring 50 others when they hit a funeral procession near the northern Iraqi city of Kirkuk on Friday.

Shamefully, the Western news media, which have been blaring allegations of war crimes against Russia over its military operations in Syria, were largely silent on the massacre near Kirkuk.

Only days before that barbarity, there were several other mass atrocities committed by American allies elsewhere in the Middle East.

Within hours of that murderous assault, warplanes from Turkey, another NATO member, were responsible for killing some 150 Syrian civilians in multiple air raids also in Aleppo countryside, according to Syrian state media.

Meanwhile, in Yemen, the US-backed Saudi air bombardment continued its slaughter of innocents despite cynically declaring a non-entity ceasefire earlier in the week. Three farmers were killed in Saudi air strikes in Saada province – almost a week after American and Saudi warplanes massacred 140 people attending a funeral ceremony in the capital Sanaa. Another grotesque “anti-terror” operation.

Washington and its allies are now openly bombing sovereign countries without any legal mandate. As such, these actions constitute the crime of aggression – the most grave violation of international law. This is a redux of 1930s fascist banditry by Western states who haughtily pontificate to Russia.

© Flickr / Expert Infantry / Best of the U.S. Air Force - Department of Defense Image Collection - September 1998
US-Led Coalition Seeks to Squeeze Daesh From Mosul Into Syria - Russian Envoy
In Syria, the US-led coalition including Britain and France have been carrying out air strikes on that country for over two years, killing hundreds of civilians – all in the name of “fighting terrorism”. Three months ago, in late July, US and French warplanes murdered over 100 civilians, including women and children, in and around the town of Manbij, near Aleppo, in wave after wave of bombings.

Occasionally, the Western news media do give reports on such crimes. But, generally, their duty is to minimize, by describing such incidents as unfortunate “collateral damage”, if not to willfully cover-up, as in the latest atrocity near Kirkuk.

Nevertheless, the entire hideous Western charade is gradually being exposed.

In Syria, for nearly six years the Arab country has been almost completely destroyed by a US-led covert war for regime change. To achieve this illicit objective, Washington and its NATO and regional allies funded, armed and directed a proxy army of the most vile terror groups.

When Russia and Iran intervened last year to help their Syrian ally against this international criminal conspiracy, the country was brought back from the brink of devastation. The terrorist proxy army supported by Washington, London, Paris, Turkey, Saudi Arabia and Qatar, has been routed from hundreds of towns and villages.

Syria is being liberated from a scourge unleashed in March 2011 by US-led insurgents under the guise of a “pro-democracy uprising”. That narrative has always been absurd for anyone with critical thinking. Head-chopping jihadists for democracy? Sword-wielding Saudi and Qatari despots advocating pluralist elections?

Besides, Syria already had a relatively robust democracy under President Bashar al Assad. Before the US-led war for regime change, Syria enjoyed a reputation for religious freedom, peaceful coexistence and benign social development.

© REUTERS / Hosam Katan
Incredible Transformation: US Media Turning 'Terrorists' Into 'Rebels' in Aleppo
The Western media, in the service of promoting their governments’ geopolitical agenda, have grossly distorted events in Syria. Instead of investigating a Western-backed criminal subversion involving state-sponsorship of terrorism, the media have violated honest, independent journalism with outright lies and fabrications. The Western public have been told that Washington and its allies are bombing a (sovereign) country to “defeat terrorism” when in fact any genuine, critical inquiry shows the opposite to be the case.

In the northern city of Aleppo, the Syrian army supported by Russia is liberating tens of thousands of civilians who have been held under siege, against their will, by the West’s terror proxies since 2012.

Western media coverage on Aleppo is a diabolical sham. The US, British and French governments, as well as other Europeans, are jumping up and down with accusations of war crimes against Russia and its Syrian ally.

Scarcely any evidence is presented to substantiate these unhinged Western claims of what is happening in Aleppo. Virtually all the information that the West relies on for its allegations is sourced from Western and Saudi-funded organizations such as the so-called White Helmets and Aleppo Media Center, both of whom are embedded with proscribed terror groups like Jabhat al Nusra and Ahrar al Sham.

The Western capacity for denial is astounding. The vast majority of Aleppo residents – some 1.6 million people – are living willingly under the protection of the Syrian army. Yet the Western media never report this. Rather they focus on a minority district besieged by terrorists whom they lionize as “heroic rebels”.

Even when verifiable live broadcasts in Aleppo, set up at the humanitarian aid corridors established by Russian and Syrian authorities, demonstrate beyond doubt that the truces are flagrantly violated by the Western-beloved “rebels”, still the myth-making continues. During three days of humanitarian pause to help vacate civilians, the militants were seen shelling neutral transport arrangements and of holding people as human shields.

© Sputnik / Dmitriy Vinogradov
Ban Ki-moon at SPIEF: UN Fully Supports Coalitions Fighting Against Daesh in Syria
Washington and its European allies, primarily Britain and France, as well as UN chiefs Ban Ki-Moon and Staffan de Mistura, the special envoy to Syria, are a disgrace. So too are the Western corporate news media who have lied all the way to conceal the real criminals in Syria.

In this mayhem and madness, it might seem perhaps counterintuitive to be optimistic. But good reason for optimism is that Western governments and their servile media are exposing themselves for the criminals and liars that they are.

The rogue-state behavior of Washington and its allies has become so rampant it is no longer possible to hide.

The public anger and disdain for this murdering cabal is fueled not only by what they see in Syria and the region. People all around the world are making the connection that US-led warmongering and dirty wars are rooted in the same murdering and plundering capitalist system that is killing their own societies and communities.

People are realizing more than ever that the high and mighty Western leaders who presume to sit as judges casting condemnations on others are actually the lowest, most despicable criminals.