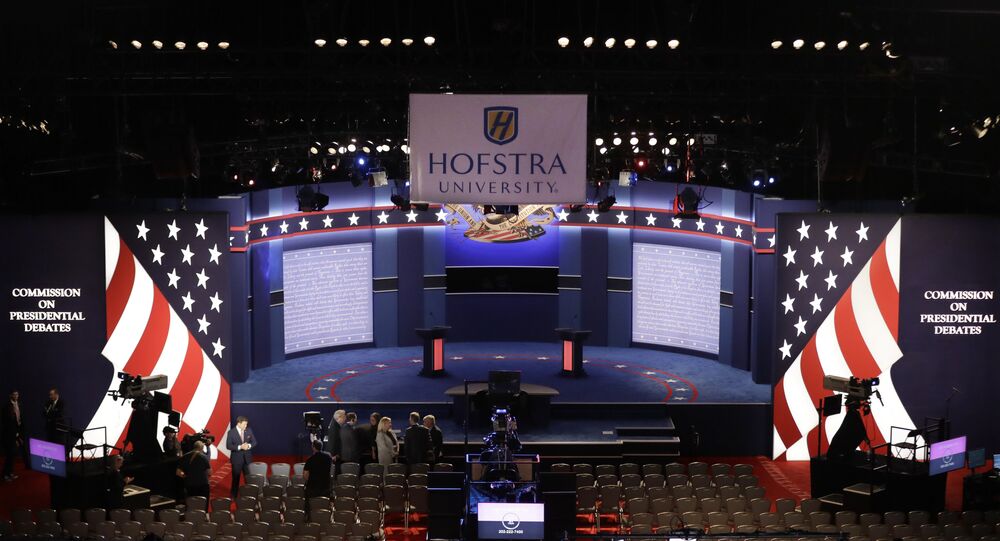 The temptation is irresistible to conceptualize the Clinton Machine’s strategy going into the first US presidential debate; let Donald Trump metastasize into a pretzel. Mission not impossible; in fact, accomplished.

Sniffin’ and slidin’, beepin’ and sippin’, angrily chokin’, even swoopin’ on the mike to choreograph a blow, “Donald” (as addressed by “Secretary Clinton”) fell for every shape and size of bait thrown by a canny, relentlessly focused and rehearsed-to-death, Yale-trained, Lawyerly Mother Superior. Freud, Jung and Lacan must have shed tears of joy in their heavenly pad watching the Ego-unraveling show.

© AP Photo / Evan Vucci
Trump, Clinton Clash on Contrasting Visions of Economy, Security in First Debate
While Secretary Clinton controlled the debate, Donald could not even control his temper; but this being The Donald, it did not prevent him from launching an out of left field self-elegy to his “temperament”.

The latest installment of the longest job interview on the planet, played out in a deep blue stage with white stars featuring an American eagle with an – out of place — olive branch, may have qualified as wild, wacky TV at its apex.

Yet on the Donald front it was mostly painful to watch. Stream of consciousness non-sequiturs ruled, as in, “I have a son who’s 10, he’s so good with computers” — running commentary on US cyber-security vulnerability.

But then, from a global public opinion point of view, there’s geopolitics – something that vastly infantilized swathes of Americans consider at best a big, meaningless word. Yet Secretary Clinton herself was keen to emphasize, “words matter”.

So let’s see how (and if) geopolitical words made sense at the Trump/Hillary cage match.

© REUTERS / Joe Skipper
Trump Vows to Release Tax Returns When Clinton Releases Deleted Emails
Trump’s view of China seems to come from someone reading Sun Tzu on LSD; “You look at what China’s doing to our country in terms of making our product, they’re devaluing their currency and there’s nobody in our government to fight them… They’re using our country as a piggy bank to rebuild China, and many other countries are doing the same thing.”

Beijing is not practicing quantitative easing (QE); actually it’s the US, Japan and Germany who do.

Unfortunately Donald did not elaborate on climate change; a November 7, 2012 Trump tweet ruled that global warming was invented by China to devastate the US manufacturing industry.

On the other hand Trump may have — indirectly — validated China’s One Belt, One Road (OBOR), a.k.a. The New Silk Roads, which are all about infrastructure upgrading; “You land at La Guardia, Newark, L.A.X., and you come in from Dubai and Qatar, you come in from China, you see these incredible airports, we’ve become a third-world country.”

Donald blamed Secretary Clinton for turning Iran into a “major power” – a shtick that may have been written by dodgy casino mogul Sheldon Adelson (in the audience, and courted like a monarch).  He described the Iran nuclear deal as “one of the worst deals made by any country in history”, insisting “$400 million in cash” were part of the deal, and Hillary’s responsible. Donald knows it because “I met with Bibi Netanyahu the other day”.

© AP Photo / Chitose Suzuki
Trump: United States Can No Longer Act as Policeman for the Planet
China and Iran are related in varying degrees to the New Silk Roads and of course the pivot to Asia, which was first announced by Hillary. So she had to say, “I want to reassure our allies in Japan and South Korea and elsewhere that we have mutual defense treaties and we will honor them”. Crucial add-on; “Our word is good”. Asians, as demonstrated in the last G20 in China, are not impressed.

On NATO, Trump said the Atlanticist monolith must engage in direct counterterrorism operations in the Middle East. NATO actually has a Defense Against Terrorism program for 12 years now. The problem is the priorities are regime change – from Libya to Syria; keeping the heroin flowing from Afghanistan; and not giving a damn about “moderate rebels”.

Trump did promise to make NATO follow the money: “They have to understand I’m a business person”. Allies “are not paying their fair share.”

Secretary Clinton went no holds barred emphasizing Trump has been “praiseworthy of Vladimir Putin”. Trump: “Wrong”. He could have qualified, if he was not sniffin’ so hard; in a March 20 debate, Trump said, “Putin is a strong leader, absolutely. He is a strong leader. Now I don’t say that in a good or bad way. I say it as a fact.”

It went virtually unnoticed. But Trump, in one sentence, actually may have ruled out WWII if he becomes President; “I would certainly not do first-strike” – as in the official US doctrine, reiterated by Obama, that guarantees a US first nuclear strike. Secretary Clinton did not comment.

I want my Pyongyang Tower

Secretary Clinton was adamant that “Donald supported the invasion of Iraq.” Trump: “Wrong”. Actually, right; he did, already in 2002. But
“that is a mainstream media nonsense put out by her!”

© AFP 2021 / Ramzi Haidar
Washington Spent $6 Trillion in Middle East Instead of Rebuilding US - Trump
Donald was adamant that “President Obama and Secretary Clinton created a vacuum for ISIS.” Actually, Hillary might have been “fighting ISIS your entire adult life”. Lt. Gen. Michael Flynn has not briefed Donald properly; he meant al-Qaeda in Iraq – which sprang up as a direct consequence of Bush’s “Mission Accomplished”. Its spin-off, ISIS/ISIL/Daesh, fully emerged only in 2014, when Hillary was already out as Secretary of State. So Donald was not able to explain how the emergence of ISIS was a willful decision taken by official Washington.

It was on the theme of cyber-attacks on the US that Secretary Clinton finally managed to – subtly — conflate the Pentagon’s three “existential threats” who happen to be closely involved in Eurasia integration; Russia, China and Iran.

Expanding in one sweep from cyberspace to Full Spectrum Dominance, she said, “whether it’s Russia, China, Iran, or anybody else, the United States has much greater capacity. And we are not going to sit idly by and permit state actors to go after our information, our private sector information or our public sector information.”

Donald stressed, “whether [the DNC hack] was Russia, whether that was China, whether that was another country, we don’t know”. Technically correct. That did not prevent Secretary Clinton from doubling down; “I was so shocked when Donald publicly invited Putin to hack into Americans. That is just unacceptable.”

So, in a nutshell, Donald may have landed only two good blows; on NAFTA and dodgy trade deals, an on the absolute mess in the Middle East exacerbated by Obama/Clinton. Nothing though on the Clinton Foundation – which benefits handsomely from Persian Gulf direct/indirect supporters of Salafi-jihadism.

© REUTERS / Jonathan Ernst
US Presidential Debate: Why the American People Deserve Better
We might as well have seen the sanctimonious Lawyerly Mother Superior expelling the sniffin’ and slidin’, rantin’ and whinin’ billionaire schoolboy bully from class – to some variant of highway to hell. But next time he won’t be so easily pretzelled out. In this most irrational of political contests, stream of consciousness may even have the last word; “I have better judgment than she does…