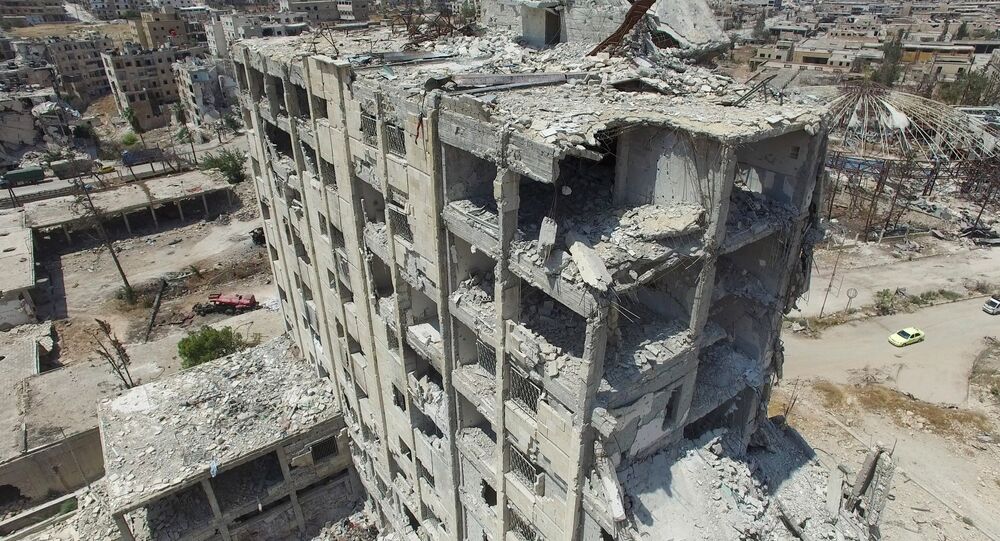 Tough negotiations between America and Russia’s top diplomats have managed to produce a tentative ceasefire plan for Syria. But Washington doesn’t really want a ceasefire. More likely, a respite for its regime-change proxies.

© AFP 2021 / DELIL SOULEIMAN
Breakthrough Deal: This is What Russia and US Agreed to Do in Syria
After more than 13 hours of intense discussions in Geneva this weekend, on top of months of back-and-forth talks, US Secretary of State John Kerry and Russian Foreign Minister Sergey Lavrov emerged in a joint press conference to announce that a cessation in fighting would begin this week.

A previous attempt at implementing a truce back in February failed within days of that initiative because anti-government insurgents affiliated with the al-Qaeda terrorist network refused to abide by that earlier agreement.

There is no reason why this second ceasefire attempt should otherwise succeed in holding.

There may well be a temporary lull in violence simply because opposition militia will avail of the opportunity to regroup and repair. But the core of the insurgents are dominated by terrorist groups like Jabhat Fatah al Sham (formerly al-Nusra Front) and Daesh and numerous other affiliates.

These proscribed terror groups have no interest in negotiating a political transition in Syria with the incumbent government of President Bashar Assad. Their whole purpose is to overthrow the state and turn it into a so-called caliphate ruled by fear.

This gets to the kernel of why the ceasefire deal worked out by Kerry and Lavrov is fatally flawed.

© AP Photo / Kevin Lamarque/Pool
This is Who Benefits From Russia-US Agreement on Syria
Arguably, the Russian side is negotiating in good faith with the genuine intention of achieving a peaceful resolution to the nearly six-year-old conflict, which has resulted in 400,000 dead and millions displaced from their homes. But not so the American side.

We must always keep firmly in mind that the conflict in Syria was instigated in the first place by the US and other foreign powers for the objective of regime change against the Assad government – a long-time ally of Russia and Iran.

Recall that former French Foreign Minister Roland Dumas revealed in 2013 that the foreign conspiracy for regime change in Syria was hatched at least two years before the violence erupted in March 2011.

This US-led criminal agenda for regime change has not changed. When John Kerry talks about getting Russia to sign up to a “political transition” he means a process which will culminate in the ouster of the Assad government.

© AFP 2021 / BARAA AL-HALABI
Free Syrian Army Supports Fight Against al-Nusra Front Terrorist Group
At the Geneva press conference this weekend, the US diplomat clearly said that he was coordinating his efforts with those of the exiled opposition group called the High Negotiations Committee. Days before, the Saudi-backed HNC unveiled yet another “vision” demanding “transition” and Assad’s departure.

On the Geneva meeting this weekend, the Washington Post reported: “Kerry acknowledged the truth of the Russian charge that some opposition groups are fighting in tandem with the [al-Nusra] Front and said it was incumbent on them to now make a choice.”

The paper also noted: “Both Kerry and Lavrov emphasized that outside supporters of all non-terrorist [sic] belligerents would have to bring their allies in line.”

Without this putative separation of “moderates” and “terrorists” then there can be no feasible premise for a substantive cessation of violence. The proposal for US and Russian forces to subsequently cooperate in carrying out air strikes against terror groups is therefore a non-starter.

The confidence for this assertion is because, as Kerry half-acknowledged, there is no distinction between “moderate rebels” and “terrorists”. They are all part of the same regime-change proxy army that the US and its NATO and regional allies orchestrated from the outset of this reprehensible conflict.

Expecting these proxies to somehow sort themselves into “good guys” and “bad guys” is a ludicrous conception of how and why the war was instigated and prosecuted.

© Sputnik / Eduard Pesov
This is What Prompted US to Come to Agreement With Russia on Syria
Washington and the Western news media engage in euphemisms of how these groups are “intermingled”, “overlap” and “marbled”. But such attempts at differentiation are either deluded or deceitful. For virtually all the anti-government insurgents are integrated into the same terrorist front. That’s why months of Russian admonitions to the US to segregate its supposed moderates from the terrorists have resulted in no separation.

For John Kerry to propose at this late stage for “non-terrorist belligerents” to get onboard with the ceasefire is nothing but a cynical ruse.

So what is Washington really seeking? Part of the proposed deal involves Russian and Syrian forces calling off their offensive against eastern Aleppo – the so-called “lifting of the siege” and supplying “humanitarian aid” to insurgent-held areas.

Cynically, but realistically, those provisions are less about halting violence and humanitarian effort and more about giving the foreign-backed regime-change forces a much needed breathing space.

Ever since Russia sent its forces into Syria at the end of last year, the US-led regime-change war has turned into a losing campaign.

© Sputnik / Michael Alaeddin
Syrian Army’s Success in Aleppo Sparks New Round in 'Anti-Assad PR Campaign'
What Washington and its other foreign co-conspirators – Britain, France, Turkey, Israel and Saudi Arabia – badly need is to give their proxies a respite from the withering offensive of the Syrian army and its Russian, Iranian and Hezbollah allies.

A reasonable conjecture is that the Pentagon and CIA war planners – Kerry’s ultimate bosses – want a holding and reorganizing position until Hillary Clinton is elected as the new president. Lame-duck Obama has been too much of a ditherer and not sufficiently gung-ho about regime change in Syria.

Clinton, on the other hand, has vowed to step up American military intervention in Syria. She has called for setting up of no-fly zones and a tougher stance towards Assad and Russia.

But if Syrian and Russian forces continue their rate of attrition against the regime-change proxies, there may be little of these foreign assets left by the time Clinton takes office early next year. Hence, the insurgents must be salvaged from their precipitous defeat – and this is what really pertains to the “ceasefire” that Kerry has appeared so keen to accomplish.

The conjecture of a “holding, reorganizing position” also tallies with the recent invasion by Turkish military forces into northern Syria and the joint US-Turk annexation of territory. It suggests that a greater war effort for regime change is being anticipated for when Clinton takes office. (Assuming Donald Trump’s candidacy can be wrecked by the relentless US media vilification he is being subjected to.)

© AP Photo / Manu Brabo, File
US-Backed Rebel Attack Kills Last Surgeon in Aleppo Neighborhood
Which begs the question: why have Russia and the Syrian government apparently gone along with this latest ceasefire arrangement? If, that is, it is a cynical ruse for regime change?

Why don’t Syria and Russia just drive on with their very effective offensive to defeat the terrorist regime-change front?

Perhaps, Syria and Russia have their own calculations for regrouping and refining tactics for resuming even greater offensive power.

Or perhaps, Russia knows all too well, privately, that the Americans are full of claptrap. This latest ceasefire proposal has no chance of working because of the inherent flaws. But Russia’s international reputation has little to lose from “giving peace a chance”.

So, let Washington’s proposal for “separation” of insurgents fail, fail, and fail again, and let the world come to see the utter fallacy and criminality of American policy.

The trouble, however, is that more delay gives more leverage to a Clinton presidency and what promises to be a far more warmongering next White House administration.