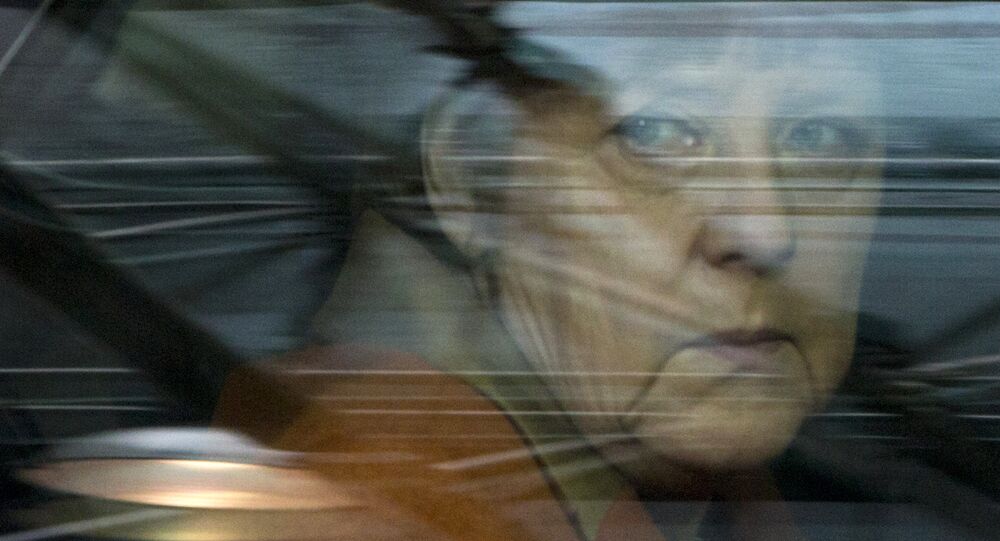 Hypocrisy, Your Name is Angela Merkel

Just over a year ago German Chancellor Angela Merkel together with other Western leaders demonstrated in Paris to show solidarity with its people in the aftermath of the terrorist attack on the satirical magazine Charlie Hebdo.

That attack provoked an outpouring of support across with the West with the hashtag "Je suis Charlie". The attack on Charlie Hebdo was said to be an Islamist attack on the West's cherished principle of free expression and was condemned as a form of psychopathic censorship.

© Photo : Kai Pfaffenbach
At a Crossroads: Merkel Torn Between Erdogan and German Public
Angela Merkel was at the forefront of those claims. In her own words the attack on Charlie Hebdo was "an attack on freedom of expression and the press — a key component of our free democratic culture — which cannot be justified."

Shortly after the attack in an article I wrote for Sputnik I pointed out that the West's leaders — including Angela Merkel — were claiming to defend a principle of unconstrained free expression their own laws show they neither practice nor believe in.

A year later Angela Merkel has provided startling confirmation of this.

This poem though sexually explicit does not offend religious sensibilities in the gross way cartoons that regularly appear in Charlie Hebdo often do.

The prosecution therefore violates the right of free expression set out in Article 10 of the European Convention on Human Rights. To add to the absurdity Chancellor Merkel practically admits as much saying the law under which the prosecution is being brought will soon be repealed.

Why in that case is this prosecution being brought at all?

The German authorities defend it on the grounds that they are merely carrying out the law.

That is an absurd claim. Not only is there always a degree of discretion in the way the criminal law is administered — especially in a case where the law clearly violates Article 10 of the European Convention on Human Rights and is therefore itself unlawful — but by that argument prosecutions should be brought in Germany to defend every foreign head of state — not just President Erdogan — whenever they are insulted.

© REUTERS / Umit Bektas
Reporter for Dutch Press Detained in Turkey For Anti-Erdogan Tweet
That of course is not what happens.

By comparison with the sort of insults regularly levelled in Germany against Russia’s President Putin Turkish President Erdogan comes off lightly.  No one however in Germany has ever suggested that President Putin’s many German critics should be prosecuted for insulting him under this law and it is inconceivable the German government or Chancellor Merkel would authorise such a prosecution if it was.

The true reason Chancellor Merkel has authorised this prosecution — as everyone knows — is that she needs President Erdogan’s help to stem the flow of refugees flooding into Germany after she foolishly invited them there.

This flood of refugees has exposed Merkel to much criticism and has led to a backlash from German voters which is putting her position as Chancellor at risk.

Merkel no doubt calculates that German voters care less about an abstract principle of free expression than they do about the flood of refugees in their midst.

© REUTERS / Michaela Rehle
Merkel's Popularity Plummets to Lowest in 5 Years Amid Migrant Crisis
She is therefore willing to allow a prosecution of a German comedian to appease the wrath of President Erdogan especially as she knows the German courts will almost certainly throw it out thereby limiting the political damage.

Whilst one can understand the political logic it is the hypocrisy that stands out.

Ever since she became Chancellor Angela Merkel — the Protestant pastor’s daughter as we are constantly reminded — has never hesitated to lecture and moralise at others.

Yet what she claims are sacred principles like the one of free expression which she calls “a key component of our free democratic culture” it turns out are expendable when her position as Chancellor is at risk.

Merkel: No Discussion by US, Four EU Leaders on Boosting Military in Syria