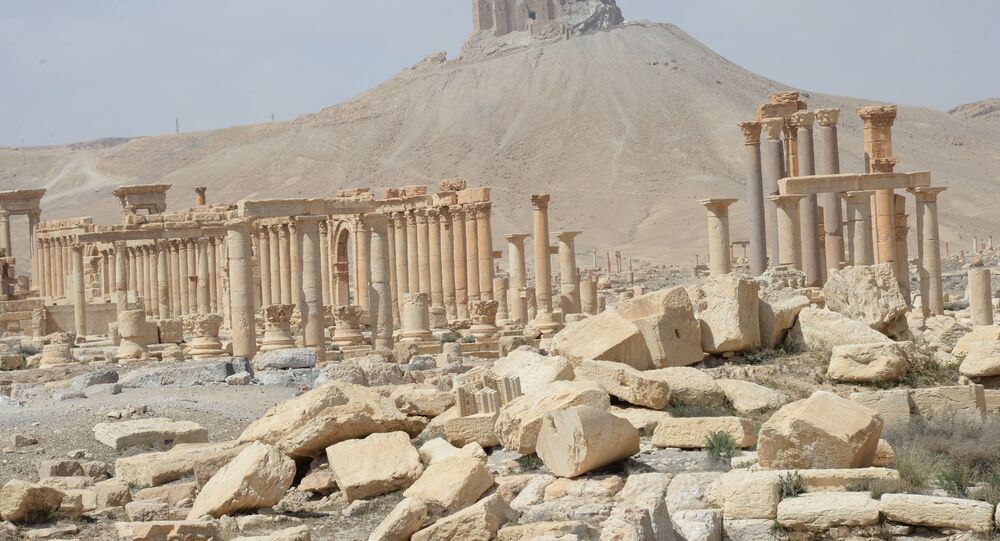 The liberation of Palmyra by the Syrian army supported by the Russian air force is unequivocally good news.

Первый Канал (screenshot)
First Images of Palmyra’s Ancient Artifacts Damaged by Daesh Revealed (VIDEO)
It is good news because it liberates one of Syria’s oldest cities from the dark oppression of Daesh.

It is good news because it brings closer the day of Daesh’s eventual collapse, opening the way for the lifting of the siege of Deir Ez-Zor and the liberation of Raqqa.

Palmyra’s liberation is also good news for all humanity and not just because it hastens the day of Daesh's final collapse. Palmyra is one of the greatest archaeological sites in the world, concentrating within itself some of the greatest monuments of classical Antiquity.

Первый Канал (screenshot)
First Images of Palmyra’s Ancient Artifacts Damaged by Daesh Revealed (VIDEO)
It is a site of tremendous historical importance, the capital of the great Arab Queen Zenobia who defied the Romans. It is first and foremost the property of the Syrian people and of the Arab nation, but it is also in the truest sense the property of all humanity.

Any civilized person would earnestly wish to see Palmyra preserved. Its threatened destruction by Daesh would have been a cultural calamity comparable to the sack of Rome by the Goths or the sack of Baghdad by the Mongols.

Those who say they value Palmyra’s preservation less than human rights or democracy fail to understand that it is precisely when places like Palmyra are destroyed that human rights and democracy — and indeed human life itself — are most threatened.

Acting with indifference to the threatened destruction of a place like Palmyra is not the conduct of a humane, civilized and democratic person even — or especially — if it is done behind a mask of humanitarianism. It is the conduct of a barbarian.

© REUTERS / SANA/Handout
Palmyra Liberation: Syrian Army Officer Reveals Details of Operation (VIDEO)
The leaders of the West claim to be civilized people. When last May Palmyra was captured by Daesh they sent up a wail of pretended horror.

They then did precisely nothing though saving Palmyra was well within their power.

Instead they doubled down on their calamitous regime change policy: shipping more weapons to the Syrian opposition, renewing their demand President Assad step down, and threatening him with a no-fly zone if he didn’t.

Meanwhile their bombing of Daesh was sporadic and ineffective, failing even to interrupt its oil trade.

Daesh in Palmyra was left alone to carry on with its gruesome murders and to blow up monuments there.

Matters got so bad that last summer the Western powers told the Russians that instead of being chased out of Palmyra Daesh would be in Damascus by October.

When Russia intervened in September to prevent this calamity it came under a storm of criticism.

© Sputnik / Mikhail Voskresenskiy
Syria’s Desert Falcons Thank Vladimir Putin for Support in Liberation of Palmyra
Six months later, as a direct result of Russia’s intervention, Damascus has been saved, a truce brokered by Russia has brought peace to most of Syria, negotiations without preconditions aimed at finding a political settlement to Syria’s conflict are at last underway and Daesh is on the run, with Palmyra liberated and preserved mostly intact.

None of this would have happened if Russia had not intervened when it did.

By contrast, at the rate they were going, if it had all been left to the Western powers, Syria would have been destroyed and by the time Daesh finally left Palmyra at some point in the remote future it’s doubtful whether there would have been so much as a stone there left standing.