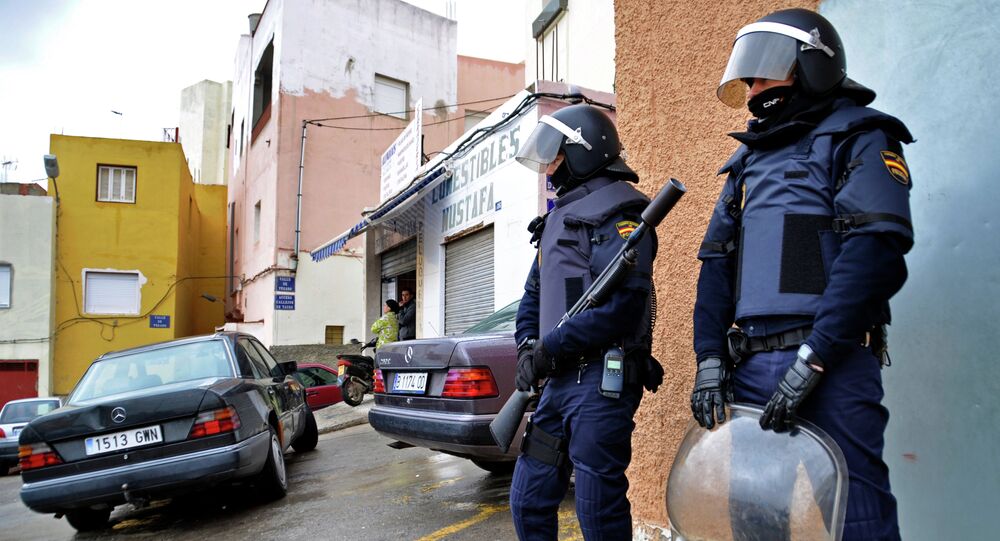 It took four months for Salah Abdeslam - one of the alleged commando members on Paris 11.13 - to be captured in Brussels after a shootout. He never escaped to Syria; he never moved away from his known digs in Molenbeek.

© REUTERS / Umit Bektas
Turkey’s Erdogan Mentions Possible Brussels Bombing Just Days Before Attack
It took only four days for the next plot twist — a coordinated jihadi attack at Brussels airport and a metro station only 500 meters away from the EU headquarters.

Under a blowback scenario, this was largely predictable. Belgian Foreign Minister Didier Reynders had even warned during the weekend attacks were imminent. More worrying is the leak that Belgian secret services — as well as Western intel agencies — had "precise" info about the risk of an attack at the airport and a probable attack on the metro.

Even more significantly, and before the arrest of Abdeslam, none other than neo-Ottoman Sultan Erdogan, leader of a key "NATO ally", had seen the writing on the wall; "There is no reason why the bomb that exploded in Ankara cannot explode in Brussels, in any other European city." Erdogan was, of course, drawing a nasty, false connection between Kurds and Salafi-jihadis, yet he sounded like he was delivering a mix of prophecy and threat.

Europe once again has been drowned in the same old warped litany. Two jihadi suicide brothers. An expert ISIS/ISIL/Daesh bomb maker — who may have manufactured the suicide vests used in Paris, loaded with Triacetone Triperoxide (TATP). An evaded airport bomber leaving a will on his laptop. A mysterious rifle found near one of the blown-up jihadis. No passports were found — at least not yet; instead, an incriminating ISIS/ISIL/Daesh flag.

A tsunami of police has congested the streets of European capitals to "ease public anxiety" and "act as a deterrent" — as if this show of force would enforce anything other than fear.

The US State Department — truthful to its spectacular record of inanity — blurted out that ISIS/ISIL/Daesh is "under pressure". US diplomats might as well have placed a call to "NATO ally" Erdogan, for whom the fake "Caliphate" at a minimum can be used as a pre-positioned, actionable asset in the Middle East chessboard.

© REUTERS / Muhammad Hamed
'I Will Stop Here': EU Foreign Policy Chief Breaks Down at News Briefing (VIDEO)
Reams of EU politicos distilled their best crocodile tears over Zegna suits lamenting "an attack on democratic Europe"  — an attack, by the way, perpetrated by born and bred EU citizens who became jihadi transformers in the proxy war in Syria heavily supported by assorted EU members.

Ratings for the latest EU show — the savage bickering over the "security challenge" to Fortress Europe — went through the roof.  Across many a EU capital, clock towers avidly "celebrated", in unison, the demonization of refugees and the decapitation of multiculturalism.

And Schengen, which was in Walking Dead mode, was hit with a sawed-off shotgun and is now, well, pretty much dead.

The end of Schengen may cost the EU as much as $100 billion. Xenophobia and Islamophobia, for their part — which are offered free of charge — never had it so good.

Europol sources swear that at least 5,000 jihadis have entered the EU disguised as refugees. No one's asking; if they have been positively identified, how come they were not arrested? At least 400 of those may be ready to wreak havoc all across Europe.

Brussels airport happens to be just a couple of kilometers away from NATO's HQ — whose alleged mission is to maintain security in Europe while actually, in practice, behaving like a Robocop from Africa to Central Asia. The jihadis, instead, aimed at an airport under virtually maximum security and a metro station within walking distance from the Barlaymont, the HQ of the European Commission (EC). They may even have planned to attack two nuclear plants in Doel and Tihange.

The fact that ISIS/ISIL/Daesh is blowing up citizens from the EU and many other nationalities right under NATO's noses cannot but raise eyebrows. Especially when we know that for NATO and its sorry gallery of Strangeloves, Breedloves and Breedhates, the "enemy" is not Salafi-jihadism, but "evil" Russia.

What about an R2P for Europe?

It's always enlightening to examine how US Think Tankland is reading the scene. After Paris, there was widespread praise when France declared itself "at war", increased its "military activity" in the Middle East, and passed a French Patriot Act that is destined to remain in place for a long time.

© REUTERS / Francois Lenoir
Daesh's Rampage is More 'an American Failure Than a European One'
Now, Exceptionalistan thinkers are dejected because the EU does not have an army (actually, it does: NATO's) and so "cannot react" to what they have dubbed "Belgium's 9/11". Of course NATO can "react"; it could march over ISIS/ISIL/Daesh across "Syraq" rightfully involving R2P ("responsibility to protect", in this case hundreds of millions of EU civilians). But that's not, and never was, a priority.

To blame it all on Belgium as a failed state is so easy. That's part of the puzzle, but not the heart of the matter.

Expect EU "leaders" to hold an imminent summit to do something, anything, about ISIS/ISIL/Daesh. Perhaps offer them — or be debased by — a deal, like the one (illegal under international law) recently struck with "NATO ally" Erdogan, which treats migrants as a lowly piece of merchandise and tramples over myriad logistical and legal barriers.

And right on cue, with the bodies in Brussels still not buried, Turkish Prime Minister Ahmet Davutoglu once again called for a safe zone in — where else — Syria, stressing that Europe's security starts with Turkey.

Europe's refugee crisis also started with Turkey; it was Ankara that released them en masse from their holding camps in the first place. A legitimate question is whether Ankara would have the gall to flood the EU with refugees without a green light from Washington; the rationale, in this case, would be to" force" Turkey into the EU — Erdogan's clause that negotiations for access should be accelerated — to improve its anti-Russian status.

The EU could always offer ISIS/ISIL/Daesh a "You don't bomb us here in Europe, and we don't bomb you in ‘Syraq' deal". But wait; this (informal) arrangement is already on, via the US-led NATO-GCC coalition.

Don't expect EU politicos to connect the dots, as in the EU covert war in Syria — specially via the weaponization of scores of "moderate rebels" by Britain and France — generating blowback. Expect instead reinforced airport "security" hell over bottles of Perrier.

It's now more than established there was a "willful decision" in Washington to let ISIS/ISIL/Daesh — which was born in Camp Bacca, an American prison in Iraq — fester and prosper. Brussels airport was on the highest possible security level. A Salafi-jihadi cell managed to evade a vast manhunt all over Brussels for four months.

An Operation Gladio gambit — conducted by CIA/NATO, just like in old times — remains a solid working hypothesis. Operation Gladio established an iron clad Western intel principle that killing innocents for a higher cause is justified.

© REUTERS / Yorick Jansens
Brussels Attacks Again Confirm That Terror, Not Russia, is Real ‘Existential Threat’ to West
To thwart closer economic/trade cooperation between Russia and Europe remains a key Exceptionalistan objective. This also carries a subplot; Western corporate media will keep carping that all those horrible "Muslims" are trampling over "our values" — while in Russia, of course, when terrorism strikes, it's all Putin's fault because of his heavy hand in the North Caucasus.

Yet in a 21st century Gladio environment, false flags leading to a subversion of democracy via a strategy of tension would now serve a different purpose: to control and manipulate European public opinion — through fear, terrorism and agent provocateurs (ISIS/ISIL/Daesh amply fits the bill) — with the ultimate Orwellian aim of keeping Europe subdued and subjected to the geopolitical imperatives of Exceptionalistan.

The Orwellian aim is always to lord over a Society of Fear. At least we all know by now that fake "Caliphate" goons would never bother to attack NATO, the self-described defender of Europe's "values". Would they?