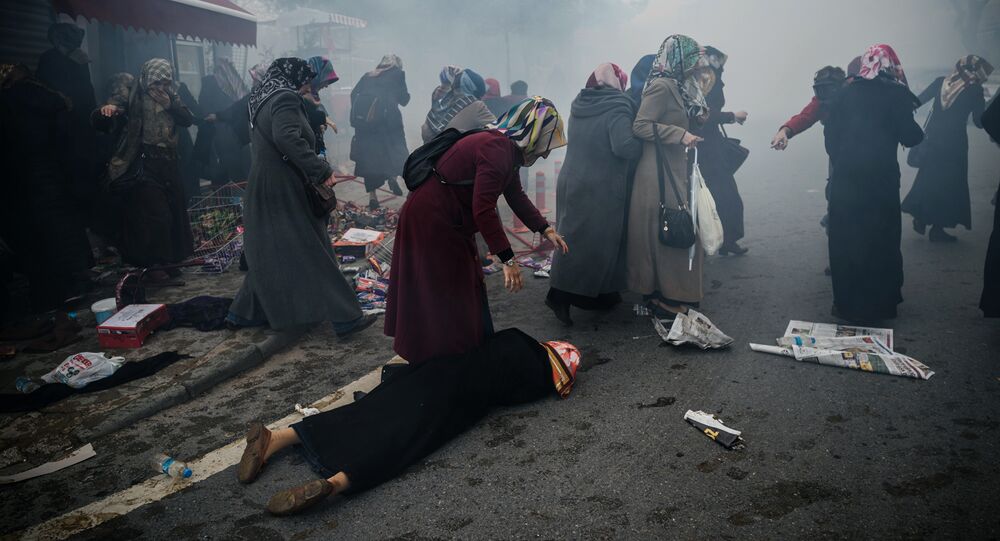 With the violent police seizure of Turkey’s biggest independent newspaper this weekend, the country has finally crossed the line to become a fully-fledged dictatorship.

For many months now, the government of President Recep Tayyip Erdogan has been cracking down on media as part of a wider move towards an increasingly authoritarian regime under his ruling Justice and Development Party.

Brutal, chaotic scenes  at the offices of Zaman newspaper in Istanbul and its related publications this weekend prove beyond doubt that Erdogan's regime has now openly embraced dictatorship. This in a country which has a long history of military coups and genocidal authoritarianism.

The media group which owns Zaman, Feza Media, has been accused of "consorting with terrorists" connected to Kurdish separatists. A Turkish court then ordered at the end of last week that the newspaper be taken into administration under editors appointed by the government.

The charges are flagrantly trumped-up, of course. Zaman and its English-language daily, Today's Zaman, are "guilty" of nothing other than providing critical reports and analysis of Erdogan's government, especially over its reprehensible role in Syria's conflict since 2011.

"Consorting with terrorists" is the blanket charge that Erdogan is throwing at other independent Turkish media. Dozens of journalists have been arrested on similar charges. While other media outlets have been likewise closed down by Erdogan's ruling party.

Can Dundar, the editor of Cumhuriyet newspaper, is facing prosecution on "espionage" and "subversion" charges — and a possible life sentence in jail — simply because he published photographs last year that purported to show how Turkish state intelligence (MIT) was running weapons across the Syrian border — to supply illegally armed groups trying to overthrow the Damascus government.

A court ruling last month ordered that Dundar be released pending his trial, however Erdogan and his supporters said that they don't respect the court order. Yet another disturbing example of corrosive lawlessness at the heart of the Turkish state.

© Flickr / Jorge Franganillo
Bitter Reality: Erdogan's Policies Transforming Turkey Into 'Rogue State'
This weekend witnessed perhaps the most brazen crackdown on democratic freedoms by Erdogan, with the full-scale invasion of riot police at the premises of Zaman.

Hundreds of police forced their way into the offices with bolt-cutters after battering peaceful protesters off the street. Water cannons and teargas were fired into the media offices as journalists scrambled for safety from baton-wielding officers.

Today's Zaman editor-in-chief Sevgi Akarcesme and colleagues were pushed down staircases as the riot-clad police stormed the building.

"The constitution is finished," decried Akarcesme. "This is despotism," she added.

Under Turkey's state constitution, freedom of media is supposed to be guaranteed from government interference. Clearly, Turkey can no longer pretend to be a democratic state. The constitution has been sacked in the most graphic way. It is now a dictatorship where those who criticize the "ruler" are liable to receive prison sentences because they are either "terrorist supporters" or "insulting" his ego.

The increasingly despotic nature of Turkey under Erdogan is intimately bound up with his regime's criminal aggression towards Syria. Over the past five years, Erdogan has moved from covert sponsorship of terror proxies in Syria to a blatant role in waging aggression.

Over the past week, since a tentative Syrian ceasefire was implemented by the United States and Russia, Turkish military forces have been firing artillery barrages into its southern neighbor. This is an act of war on a sovereign state.

There are also reliable reports that Turkish state forces have stepped up their supply of weapons and terrorist insurgents through the few remaining border crossings, which have been largely closed off by the Syrian army supported by Russia's air power, as well as by Kurdish Syrian fighters.

Erdogan's regime is thus openly at war with Syria and his desperate recklessness is directly connected to the heavy losses that the Syrian army and Russia have inflicted on his covert surrogate terror brigades. The latter include the internationally recognized terror groups of Al Qaeda-linked Islamic State/Daesh and the Nusra Front.

But such state criminality is hardly tenable in a country where an independent, critical media supposedly operates. The courageous, critical reporting in recent years by Turkish newspapers and television outlets has exposed the violations committed by the Erdogan regime in Syria's dirty war.

And that is why Erdogan is now shuttering this media with an iron fist, under the utterly fabricated but ironical charges of these outlets allegedly "supporting terrorism".

Erdogan is getting away with this brutal conduct largely because he is being indulged by Washington, the European Union and the US-led NATO military alliance, of which Turkey is a member.

These Western institutions are all equally complicit in Turkey's state-sponsored terrorism against Syria. So, as the Erdogan regime gags the Turkish media, his Western allies are obliged to keep their mouths shut too.

On the latest newspaper seizure, the US State Department issued a trite statement expressing concern. "We see this as the latest in a series of troubling judicial and law enforcement actions taken by the Turkish government targeting media outlets and others critical of it," said US spokesman John Kirby.

One can only imagine how different Washington's response would be if, say, similar events took place in Moscow. There would be wall-to-wall Western media coverage denouncing Vladimir Putin as a dictator.

Western hypocrisy and double-think reaches a crescendo as the European Union leaders meet with Erdogan's officials in the coming days over the refugee crisis.

European Council President Donald Tusk only days ago praised Turkey as a partner in stemming the flow of refugees into Greece, and the EU is planning to grant Erdogan's regime $3.4 billion in taxpayers' money to help accommodate more migrants on its territory.

You can't get more absurd than that. EU leaders pander to Turkey after the latter has played a leading role in destabilizing Syria and triggering the refugee crisis. And when this same regime cracks down on independent media exposing its criminal collusion with terrorism, the EU says or does nothing of importance.

Turkey is embracing fascist dictatorship; and Washington and its European minions are smitten by the same embrace.

Erdogan's regime is marching all over democratic rights as Turkish media succumbs to the jackboot of dictatorship. Not far behind and in lockstep are Washington and the European Union. Their cynical silence is their indictment.

Wrong Train to Damascus: Will Erdogan Catch the Last Car?