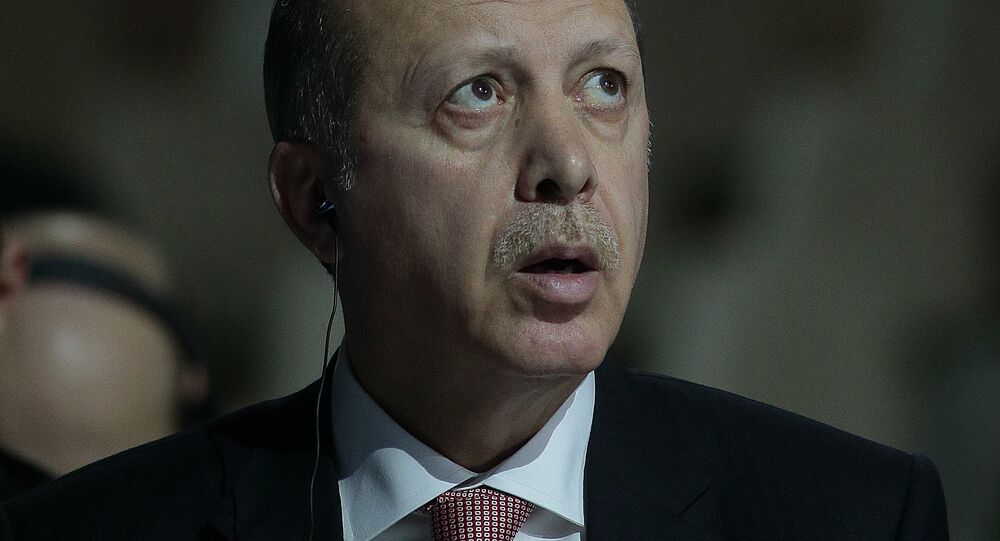 As unlikely as it may have sounded just under one year ago, the geostrategic situation has remarkably changed to such an extent that it now looks conceivable that the US might be ready to turn on Erdogan.

© AP Photo / Virginia Mayo
US and NATO Must Rein In 'Bellicose and Aggressive' Turkey
Erdogan's decision to shoot down the Russian anti-terrorist jet over Syria can be considered the turning point at which the US began to distance itself from the Turkish strongman. While most commentators were in hysterics during that time about the potential for a Third World War, the author calmly analyzed in the article "Why's The US Hanging Turkey Out To Dry?" that not only would the US fail to support Turkey in any possible war with Russia, but that Washington will actually intensify its operations to destabilize Ankara through its doubling down of support for the Syrian Kurds.

Since then, other analysts such as CounterPunch contributor Mike Whitney have recently come along to sharing that conclusion, signaling that the theory is gaining traction and that the US might consider reversing its erstwhile steadfast support for the Turkish leader.

While Washington has certainly demonstrated mixed signals in this regard over the past couple of months, it might just commit to implicitly supporting a regime change scenario against Erdogan in order to safeguard the strategic gains that it's accomplished thus far with the Immigrant Crisis.

Three recent events in particular signify that the US is no longer providing unconditional and unwavering support for Erdogan:

The US does not recognize any of the anti-Daesh Kurdish militias in Syria as being terrorist groups, and by training, arming, and supporting them with airstrikes, the US is sending a strong message to Turkey that it doesn't care about its geopolitical sensitivities and will continue to pursue its own grand strategy in Syria regardless of its ally's objections.

© AP Photo / Burhan Ozbilici,
Turkey Could Wreck Syrian Ceasefire, Set Off Wider War - Ex US Colonel
The Russian-American joint proposal to stop the fighting in Syria was a masterstroke of diplomacy that simplified the battlefield situation and has made it much easier to identity the "good moderates" from the "bad terrorists", according to an exclusive Sputnik interview that Ekaterina Blinova conducted with The Saker, the pseudonym for a former military analyst and popular blogger on Russian affairs. His comments about a "binary setup" whereby "those who cease fighting are integrated into the political process (and) all others are designated for annihilation" infer that Russia and the US de-facto recognize Turkey's local proxies as terrorist organizations, which represents a complete reversal of American policy.

Erdogan is incensed that the US and a handful of its NATO allies want to patrol the Aegean Sea to intercept and send back the boatloads of immigrants that are incessantly reaching Greece's shores. There were even earlier reports that Turkey had flat-out refused to cooperate in this mission, although Turkish military representatives later officially refuted those claims.

The bone of contention is obvious, and it partly rests in the simmering and unresolved slew of territorial disputes that Turkey has with Greece and which a Sputnik article previously referred to as the "Battle Over The Aegean". Erdogan is anxious that the US and its partners will take Athens' side in this spat and use the immigrant-intercepting mission as a cover for establishing military ‘facts on the water' that play to Greece's advantage.

The Turkish leader's greatest fear, however, is that the mission will succeed beyond its wildest expectations and return hundreds of thousands of departing, destitute, and dissatisfied immigrants back to his country's shores and consequently destabilize the already politically fragile Turkish society.

Despite all the evidence pointing to the US getting ready to turn on Erdogan, Washington has characteristically sent some mixed signals on the matter in order to prevent its "partner" from panicking and to keep him in a suspended state of strategic uncertainty:

The Pentagon just gave its stamp of approval to a deal in which the US has agreed to sell $680 million worth of bunker-busting "smart bombs" to its Turkish counterparts, which the International Business Times describes as being for use against the Kurds. This indicates that the US draws a differentiating line between its support for the Syrian and Anatolian Kurds by sticking to its designation of the PKK as a "terrorist organization" and supporting Ankara's brutal war against it.

Even the US' assistance to the Syrian Kurds has its limits, it seems, with Mike Whitney pointing out in his earlier-cited article that the US "acknowledged Turkey's "right to defend itself", which is an expression the US reserves for Israel when it conducting one of its murderous rampages in the West Bank or Gaza Strip."

By bestowing Turkey with the Israeli Privilege, Washington is tacitly giving Ankara the green light to carry out limited, low-intensity cross-border shelling of the Syrian Kurds so long as it refrains from a conventional ground invasion against them.

The US is an advocate of Turkish admission into the EU out of the self-interest that it has in having its Mideast partner behave as the ultimate Trojan Horse and sabotage the bloc from within.

Accepting Turkey into the EU or even giving its citizens visa-free access to the Schengen Zone (like last year's €3 billion immigrant deal stipulated will eventually happen) would essentially institutionalize and legalize the Immigration Crisis' ongoing processes of destabilization by opening "a gateway for further immigration and [flow of] refugees to Germany", according to Vice-President of the Bundestag Johannes Singhammer.

To bring the reader up to speed, the objective behind this is to handicap the EU via a chain reaction of socio-political crises that renders it incapable of pragmatic bilateral cooperation with the multipolar powers of Russia and China, a strategy which the author described more comprehensively in an earlier Sputnik piece available here.

The events of the past year have proven that Erodgan's policy of Neo-Ottomanism has been a colossal failure in the Mideast and are partly responsible for why he agreed to the US' suggestion to shift his strategic focus to Europe, the southeastern region of which was also previously colonized by the Turks for around half a millennium and therefore seen as ‘fair game' for his expansionist Sultan-like ideology.

Turkey was on the cusp of greatly facilitating this and the corresponding institutionalization of the Immigrant Crisis when its citizens were promised eventual visa-free travel privileges to the EU, but Ankara and the US encountered a major problem — Erdogan himself.

The Turkish strongman is so reviled all throughout Europe because of his facilitative role in the Immigrant Crisis and his publicized support of Daesh that the EU elite have a substantiated fear that inking the historic visa-free travel deal with a person that their citizens believe is so notoriously dangerous, duplicitous, and undependable could lead to a full-scale revolt against them. From the US perspective, this might lead to anti-Atlantic/pro-Eurasian leaders and parties simultaneously coming to power in key countries all throughout the bloc and rapidly undermining Washington's hegemony over this space.

The public could largely be mollified, however, if Erdogan were removed from power and a friendlier face signed the agreement instead, thereby mitigating the chances that they'd immediately revolt and gradually securing the US' long-term strategy (the "boiling frog" approach).

The most realistic way that the US might do this if they were so inclined is through a Color Revolution or military coup against the Turkish President, both of which are mutually compatible with their end-game strategic vision.

© Flickr / U.S. Department of Defense
Turkey Fears Alienating US by Restricting Access to Incirlik Airbase
Russia's economic countermeasures to Turkey's aggression against it have already had a substantial impact on all of its social classes, and the country has a preexisting and popular opposition movement that seems prepared to capitalize off of this. Furthermore, the southeast of the country is already aflame in civil war and Daesh terrorists have repeatedly infiltrated Turkey and carried out several attacks within it so far. In such a precarious situation, the straws that break the camel's back could easily be the Immigrant Crisis and the War on the Kurds, both of which the US could easily aggravate.

Pertaining to the former, the US could make sure that the NATO Aegean Mission is a success and that the hundreds of thousands of prospective immigrants are sent back to Turkey to tip the delicate social balance there over to violence, just as they're presently doing in Europe. In parallel, it could provide more state-of-the-art arms to the Syrian Kurds, who have previously been accused of funneling them to the PKK for use against the Turkish military.

Simultaneously faced with deteriorating and riotous social conditions mixed with an uncontrollably escalating civil war, the combination of a Color Revolution and Unconventional War (together, Hybrid War) would likely be enough to bring the opposition to power or stimulate a reactive military coup, which either way would result in a new pro-American leadership coming to power and signing the visa-free deal, albeit this time without any considerable opposition from the European electorate.

US, Russia Deal on Syria to Clarify Turkish Role in Conflict – Lawmaker