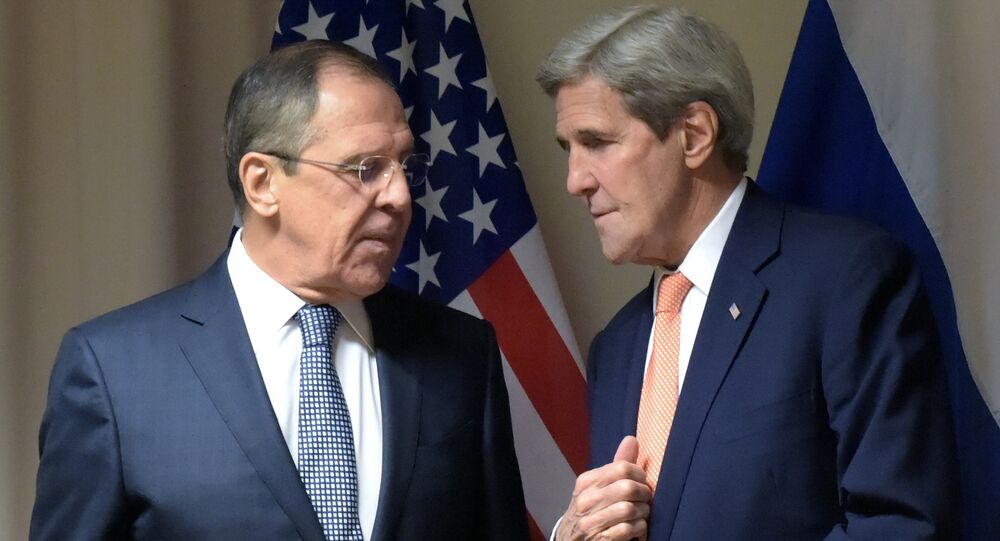 There could hardly have been a more appropriate start for the Chinese Year of the Monkey, geopolitically, than the prime monkey business enacted in Munich between US Secretary of State John Kerry and Russian Foreign Minister Sergei Lavrov.

© AFP 2021 / Christof STACHE
Munich Talks: Diplomats Agree 'Cessation of Hostilities,' Humanitarian Aid, Peace Talks Framework
As Lavrov stressed multiple times, “we made proposals on implementing a ceasefire, quite specific ones.” And yet Washington and the Saudi-Turkish combo relented. A frightened, cornered House of Saud – with its remote-controlled “moderate rebel” gaggle being routed on the ground – even started spinning the ludicrous notion of sending ground troops, a.k.a. a bunch of mercenaries, to “help the US effort” against Daesh (ISIS/ISIL/IS).

© AFP 2021 / PASCAL POCHARD-CASABIANCA
On Shaky Ground: Will Washington Give Blessing to Saudi Invasion of Syria?
Sultan Erdogan and the House of Saud certainly do – because their Syrian regime change dreams are in tatters. But the lame duck Obama administration’s case is way more complicated.

© AFP 2021 / ALBARAKA NEWS
Boots on the Ground? French PM Calls For Int'l Land Operation in Syria Without France's Participation
This is the ground scenario for the next few days. So no wonder the Saudi-Turkish combo is absolutely desperate; if they as much as try to support their “moderate rebels” with their aerial assets, they will be reduced to ashes by the Russian Air Force.

© REUTERS / Maxim Shemetov
US Starts to Understand Need to Work With Russia to Solve Syria Crisis
Behind the whole “cessation of hostilities” charade, there’s a stark fact; the lame duck Obama administration does not seem to want to escalate those proverbial “tensions” with Moscow to an irreversibly critical level (Pentagon/NATO Cold War 2.0 obsession is another story.) The skies above Syria won’t offer a prelude for a US-Russia total war.