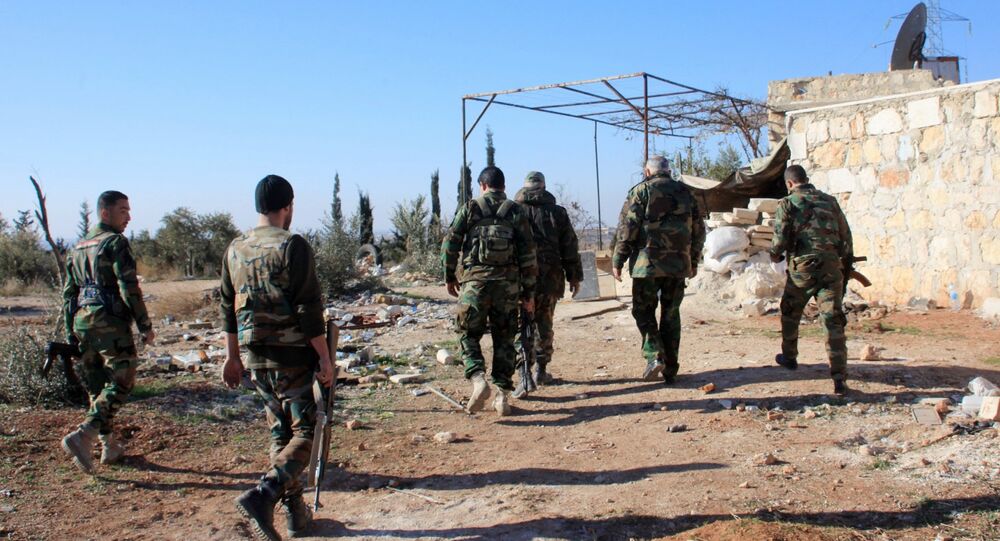 Western politicians, media and the Turkish regime are full of it. The latest wave of refugees on the Syrian-Turkish border are, we are told, terrified civilians fleeing Russian air strikes.

© AFP 2020 / GEORGE OURFALIAN
Nowhere to Hide: After Freeing Aleppo Syrian Army, Russian Aircraft Could Focus on Raqqa
No doubt civilians are caught up in this war. But many of those portrayed as refugees fleeing now from the northern city of Aleppo are actually retreating militants, who are capitulating because of Russian and Syrian military success in terminating their insurgency.

As ever distorting reality, the Western news media are transmitting a classic psychological operation in their coverage of the latest stage in what is actually the foreign-backed war of aggression on Syria.

Incredibly, Russia and the Syrian Arab Army are painted as the “bad guys”, and in turn this narrative is used to build a pretext for “responsibility to protect” – the faux humanitarian cover to allow for unwarranted foreign intervention.

That intervention could be either in the form of a US-led military invasion into Syrian territory; or in the form of political, legalistic pressure on Russia and Syria to stop their otherwise very effective offensive against illegally armed groups.

© AFP 2020 / MUSTAFA OZER
Act of Desperation? Saudis Offer to Send Special Forces to Syria
It should be emphasized that these groups, which can be objectively defined as “terrorists”, have been trying to overthrow the elected government of Syria on behalf of foreign powers, including the US, Britain, France and their regional client regimes in Saudi Arabia, Qatar and Turkey.

German chancellor Angela Merkel was in Turkey this week where she told news reporters that she was “appalled by the humanitarian crisis mainly caused by Russian air strikes” around the northern Syrian city of Aleppo.

Merkel said she and Turkish Prime Minister Ahmet Davutoglu were now going to urgently press for a “diplomatic solution” to halt the Russian and Syrian military offensive. The German leader erroneously cited United Nations resolution 2254 issued in December as her mandate. The resolution actually gives a priority mandate to defeat terrorist groups, which is what the Syrian army and Russia are doing.

Meanwhile, Voice of America, the US government-owned news outlet, reported the situation in northern Syria as follows: “The sweeping Russian-backed offensive in northern Syria by President Bashar al-Assad’s military and foreign fighters from Iran, Lebanon and Afghanistan is triggering a humanitarian crisis by propelling thousands of civilians to flee to the Turkish border, say political activists and rebel commanders.”

Turns out if you read the VOA article that its “political activists and rebel commanders” are integrated with radical jihadist militia linked to al-Qaeda.  Hardly reliable sources.

Sputnik
Moscow: No Proof Russian Airstrikes Cause Civilian Casualties in Syria
Other Western media outlets have also portrayed the events in similar terms impugning Russia as a malign force inflicting suffering on Syrian civilians and “triggering a humanitarian crisis”.

This narrative is furnishing a “moral imperative” to justify a US-led military coalition deploying boots on the ground. Last week, Saudi and Turkish military forces were reportedly ready to send ground troops into Syria, allegedly to fight Islamist extremists.

US Secretary of Defense Ashton Carter is due to meet with coalition members this week in Brussels to discuss plans for a ground intervention in Syria. It is not hard to imagine how the purported humanitarian crisis on the Syrian-Turkish border could be invoked as an added pretext for “responsibility to protect”.

Echoes there of the NATO intervention in Libya back in 2011, which led to murder of Muammar Gaddafi, regime change and the country being overrun by al-Qaeda-type terror networks.

In Syria, this is all bitterly ironic given the systematic role that the US and its NATO and regional allies have played since March 2011 in infiltrating and destabilizing the once-peaceful country with mercenary proxies and weapons for their illicit scheme of regime change against the Assad government.

But a more recent nefarious role is seen in how the Turkish regime of President Recep Tayyip Erdogan appears to have deliberately exacerbated the scenes of chaos on Syria’s border.

© AP Photo / File
'I Will Put Refugees on Buses to Europe': Erdogan Blackmailed EU for €30 Bln Over Migrant Crisis Plan
It was last week that the Turkish authorities took the decision to close the border crossing north of Aleppo. This has predictably created a bottleneck whereby up to 35,000 people, according to the Turks, are stranded, unable to cross the border to refugee centers. Western media have given much coverage to the chaotic scenes.

However, the people apparently fleeing Aleppo are not all exactly “innocent civilians”, as the Western media are reporting.

According to Syrian sources, most of those on the move out of Aleppo are fighters, who have taken their families with them. Those militants belong to the al-Qaeda-linked brigades of Jabhat al Nusra, Ahrar al Sham, Jaish al Fateh and even the notorious Daesh terror group.

Video footage and images show that among the throng of those fleeing Aleppo for the Turkish border are men donning combat-style uniforms.

In a TV report this week by France 24, one of the Western media outlets prominently running the narrative of Russian air strikes on civilians, the news team interviewed four Syrian people in a Turkish hospital who had recently come out of Aleppo. All were former “fighters” – or terrorists. Could France 24 not find civilians to interview?

© AFP 2020 / GEORGE OURFALIAN
Colossal Crackdown: Al-Nusra Front Confirms Deaths of 300 Terrorists in Syria's Aleppo
We should bear in mind too that Aleppo has a total population of 300,000, so the number of people said to have fled the city for the Turkish border is a small minority. Syrian sources say that the vast majority of Aleppo residents are relieved that the Syrian army, backed by Russian air power, is moving in to finally liberate them.

For the past five years, residents of Aleppo were held under siege by occupying jihadists imposing a reign of terror. The hapless civilians were forcibly kept as human shields to prevent the Syrian army advancing to retake the city. This same scenario has been witnessed in many other towns and cities which have been liberated by the Syrian army, much to the jubilation of the freed inhabitants.

To be sure, the Western media won’t report on those situations of residents celebrating liberation, as in the towns of Madaya, Rabia, Nubbul, Zahraa, Ataman and Sheikh Miskeen last week, and many others before that, since the Russian military intervention began on September 30.

The simple truth is that Russia’s military intervention in Syria has enabled the Syrian army to win the war against foreign-backed regime change. Thousands of mercenaries and other illegally armed groups that had been fomented in Syria are now being routed.

But the Western media are spinning that the Russian-Syrian victory against a criminal covert war is somehow a violation of human rights.

Indeed such is the success of Russia and its Syrian ally in crushing the foreign subversion that the West is desperately trying to find a new narrative by which to thwart the Russian-Syrian success.

This is why the West is distorting a humanitarian crisis in Syria and blaming Russia for it. The West and its clients have failed in their covert military project and their cynical political process held in Geneva. They are losing their war in Syria, and now they are resorting to outright propaganda lies against Russia.

And, unfortunately, gormless Western politicians like Angela Merkel stand shoulder to shoulder with the very people who have created the Syrian crisis and who are inviting even more trouble for Europe.

British Media 'Most Right-Wing and Biased' in Europe - Poll