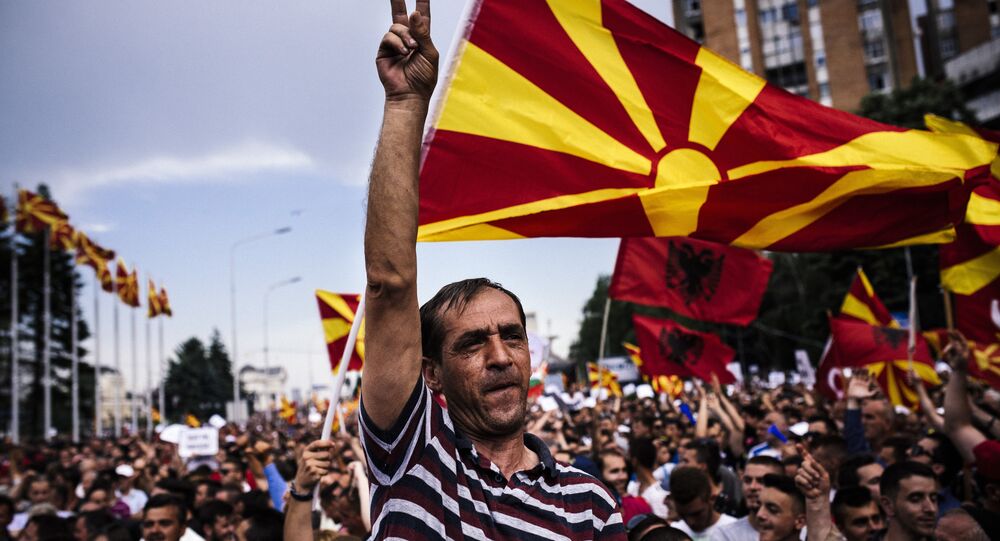 As the country moves forward on its EU-supported plan to hold early elections, the boycotting opposition disturbingly appears to be ready for another Hybrid War attempt.

The Republic of Macedonia valiantly fought back a Color Revolution plot in May 2015 when tens of thousands of its patriotic citizens came out in public support for their government. Doctored and illegally procured wiretaps had been manipulated by the Soros-affiliated opposition in order to whip the country's most radical pro-Western elements into an anti-government frenzy.

The nascent Color Revolution, also joined by the likes of well-intentioned but naively misguided individuals, dramatically failed, and it was the first time that peaceful, democratic resistance defeated what otherwise would have been a by-the-book regime change success. The security services also played a major role by earlier breaking up an Albanian-affiliated terrorist group that had set up nest in Kumanovo and planned to strike while the country was distracted by the opposition's planned nationwide unrest.

Almost one year later, these same Color Revolution and Unconventional Warfare threats are once more reemerging, albeit in a slightly adapted form and a changed domestic and international context. Nevertheless, the unipolar geopolitical game remains the same.

© AP Photo / Santi Palacios
Macedonia: MP Boycott Over But Borders at Breaking Point
The EU diplomatically intervened in the aftermath of the failed Color Revolution and brought both sides to the negotiating table. The subsequent Przino Agreement stipulated that the opposition was to gain select seats in the government and that Prime Minister Nikola Grueveski would resign 100 days prior to early elections. An interim authority would take his place and preside over the country until that time. It was later agreed that the vote would take place on 24 April and that Gruevski would step down on 15 January.

In the run-up to this time, literally all polling data to come out of the Republic of Macedonia indicated that the ruling VMRO-DPMNE party would win handsomely, with some data even suggesting that they'd do so by a 2:1 margin. Obviously, the so-called opposition wasn't able to translate the time that they bought until the next election (or cynically enough, the next Color Revolution trigger event) into winning over more adherents and at least coming somewhat close to ‘democratically' seizing power.

Frightened by the prospects of losing a free and fair EU-recognized election that all of the continent would be watching, Zoran Zaev, the leading opposition figurehead, alleged that voting lists weren't in full compliance with his party's expectations and suddenly declared that his party would be boycotting the election. This put the EU in quite a normative bind, since it had implicitly favored him and clearly went to great lengths in throwing their weight behind what otherwise was objectively an unnecessary "compromise" agreement for unneeded early elections.

Convinced that there's no hope for him and his cohorts to carry out their preplanned ‘legal coup' in the upcoming elections, Zaev is preemptively behaving like a sore loser and threatening to take the country down the path of ruin, all in order to spite its electorate and spoil Macedonia's stability. Of course, he's not the only one who harbors such dark and vengeful visions, since his foreign sponsors are actually the ones that are pushing him to do this.

© Flickr / Ian Carroll
From the Balkans to Belgium: EU Takes Aim at Terrorist Gun Trade in Europe
When Macedonia was embroiled in its latest Hybrid War struggle in fending off the combined threats of a Color Revolution and Albanian-affiliated Unconventional Warfare (terrorism), it was targeted mostly because its pragmatic government had refused to sanction Russia and actually wanted to cooperate with it on the Balkan (Turkish) Stream project. This time around, Balkan Stream has been suspended, but in the event that the Turkish opposition somehow succeeds in throwing Erdogan out of office, this mega infrastructure project will instantly be revived.

Still, by itself, this possible scenario isn't sufficient enough grounds to invest in the social infrastructure necessary to topple the Macedonian government. One would be inclined to believe that after Balkan Stream was suspended, so too would the anti-government movement in Macedonia be, right?

Well, what happened in between the last Hybrid War attempt and the forthcoming one is that the Republic of Macedonia has become an indivisible Chinese partner in facilitating Beijing's One Belt One Road blueprint for Europe. Last November saw the latest China and Central and Eastern European Countries (China-CEEC) summit take place in Suzhou, the fourth since the mechanism was first created in 2012, and Beijing proclaimed that it will be moving forward with its plans to construct a high-speed railroad between Budapest and Belgrade. Eventually, this project is expected to expand to Skopje and the Greek port of Piraeus, the latter of which is one of Europe's largest and already sees heavy Chinese traffic.

In effect, this project symbolizes a Balkan Silk Road that's engineered to facilitate a healthy influx of multipolar influence straight into the heart of Europe, but this vision is impossible to actualize if the Republic of Macedonia, the vital geopolitical bottleneck, is suffering a Ukrainian- or Syrian-like destabilization. If a Hybrid War breaks out in this tiny but disproportionately pivotal state, then China and the rest of the multipolar world will be in a less advantageous position to liberate the Balkans and save them from the West's asphyxiating ‘institutionalism'.

Simply put, in the absence of the alternative global trade route that this project would streamline for the region, the Balkans would inevitably become fully conquered by the EU and NATO after some time, with Serbia and Republika Srpska likely capitulating by force or free will in the years following Macedonia's meltdown.

There are three significant factors that have changed since May 2015, with one of them being beneficial for Macedonia but the other two of which are detrimental to its stability:

Grueveski had always stated his intention for Macedonia to join the EU and NATO, yet he never wanted this to interfere with his country's ability to pragmatically interact with Russia and China.

His refusal to become a puppet leader like Montenegro's Djukanovic and his desire to remain independent in the New Cold War was a big no-no in Washington's eyes, and he learned the hard way just how far the US would go in trying to punish him during the Hybrid War unrest that it tried to unleash last May.

Nowadays Gruevski still espouses pro-Western rhetoric so as not to appear too much of a ‘threat' to the unipolar establishment, but his continued infrastructural interests with China and economic engagement with Russia reveal that he still remains true to his original multipolar vision.

Having not backed down from his principles after the first ‘warning' the US gave him, he's not likely to do so during the second time either, indicating a high likelihood that he'll accelerate Macedonia's multipolar trajectory after the elections.

The irredentist policy of "Greater Albania" has always been a threat to Macedonia, despite most Albanians in the country having refused its tantalizing allure last year.

© REUTERS / Stevo Vasiljevic
All About Balkans: Why Montenegro's Membership Would Be 'Huge Win' for NATO?
What's changed since then is that Albania was rocked by its own domestic destabilization in early December when a riotous anti-government protest briefly broke out in Tirana. The authorities have historically resorted to Albanian nationalism as a response to any domestic crisis in order to redirect citizens from anti-government to irredentist action during tough times.

As a case in point, following the 1997 near-revolution in Albania, the government spiked its support for Albanian terrorism in the Serbian Province of Kosovo, so following this reactionary template, it's foreseeable that something similar may happen in Macedonia to coincide with the opposition's electoral boycott. Remember, the Kumanovo terrorists planned to coordinate their attacks with the opposition last year, so it wouldn't be unprecedented.

Finally, the "refugee" crisis has overwhelmed the Macedonian state and seen about one million people (half of the country's total population) transiting its territory unsupervised. With some of these undoubtedly having been terrorists, there's a risk that ISIL and other affiliated interests have infiltrated the country in preparation for carving out a "Balkan Caliphate". Add to it that ISIL released a videotaped threat to the region last year and that Macedonia's political predicament was entirely predictable, and it makes for a very dangerous situation that "refugee"-masquerading terrorists could easily exploit.

Czech Army Could Be Sent to Tackle Macedonia Migrant Crisis

Montenegro Should Not 'Go With Albania and Turkey Against Russia'