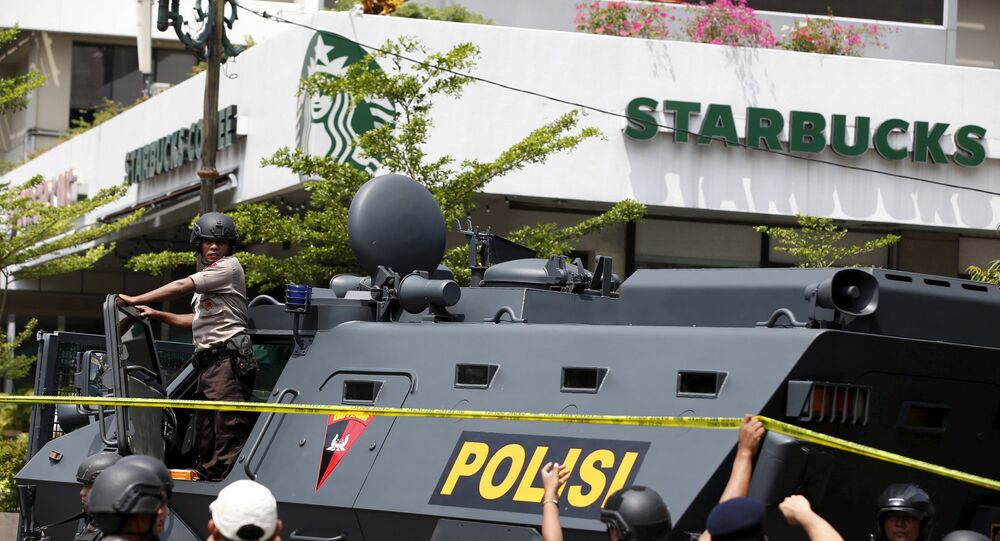 On the retreat from its traditional Mideast stomping grounds, Daesh is compensating for its losses by expanding to unconventional territory in Southeast Asia.

The coordinated Russian-Syrian anti-terrorist counter-offensives over the past few months have succeeded in putting Daesh on the defensive, but in response, the terrorist group has accelerated its expansion to distant lands like Libya, Bangladesh, and now Indonesia.

The group’s latest high-profile terrorist attack was a synchronized small arms and suicide bomber mission in the heart of Jakarta, claiming but a handful of lives but raising global talk about the archipelagic nation becoming the latest frontline state in the War on Terror.

Indonesia had been expecting a Daesh-coordinated attack since late last month after it warned citizens to be alert during celebratory Christmas and New Year’s Eve events.

© REUTERS / Beawiharta
Daesh Threatened Indonesia With Attacks Prior to Jakarta Blasts
The country is no stranger to terrorism, having been struck repeatedly by this scourge before, most notably during the 2002 Bali Bombings carried out by Jemaah Islamiyah.

Nonetheless, it felt confident enough in its sovereign capability to fight against this asymmetrical threat that it declined an invitation to join the Saudi-led “anti-terrorist” coalition, but having coincidentally fallen victim to Daesh not even one month after its decision, it might find itself pressured to reconsider.

Although the attack itself was of a lower intensity and scale than what recently struck Paris, it accomplished its goal of drawing global attention to Daesh’s presence in Indonesia.

Other than being literally half a world away from France and representing an unprecedented geographic expansion in its own right, there are other reasons why the world should be concerned about what just happened.

It’s popularly known that Indonesia is the world’s largest Muslim and entirely maritime state, but less examined is its strategic significance to global affairs.

© AFP 2021 / SONNY TUMBELAKA
Indonesia to Tighten Security Measures in Bali After Blasts in Jakarta
The country essentially serves as the gatekeeper between the Indian and Pacific Oceans, the rimlands of which are expected to function as the engine of the 21st-century global economy. While most people are aware of the importance of the Strait of Malacca, if this narrow and vulnerable passageway is somehow obstructed, then lesser known is the fact that all interoceanic trade between the two would then be forced to detour through Indonesia’s Sunda and/or Lombok Straits.

Another facet that most casual observers aren’t aware of is that Indonesia has an abundance of natural and mineral resources, and that its 250 million or so citizens have one of the most formidable yet largely untapped labor potentials in the world.

On the international scene, Indonesia rubs shoulders with all the major world powers. It engages in fruitful military-technical cooperation with Russia and is even exploring the possibility of a free trade agreement in the future. Of note, Russian Railways is also building the Indonesian island of Kalimantan’s first-ever train system, further demonstrating the strategic nature of bilateral relations at present.

Concerning China, the country is Indonesia’s main import partner and Jakarta has lately been deporting illegal Uighur migrants and suspected terrorists back to their homeland.

Relations with Japan are also quite positive, and the fellow island nation is Indonesia’s largest export destination. The two sides commenced their first-ever “two-plus-two” format of talks between their Defense and Foreign Ministers in late-December, illustrating the interest that they have in deepening political-military ties.

The bilateral partnership between Indonesia and the US is one of the hallmarks of Jakarta’s foreign policy, and it’s this element which is taking on a heavier geopolitical weight in the present day.

© REUTERS / Beawiharta
Indonesian President Calls for Scrapping of Old World Order Created by US
After having stayed on the TPP sidelines for years, Indonesian President Joko Widodo surprisingly announced that his country officially wants to join the economic arrangement in the future.

It should go without saying that this is bound to draw the ire of China, which has been strongly against the discriminatory trade deal and fears having access restricted to one of its most crucial overseas partners.

Furthermore, Indonesia’s Air Force Commander Yuyu Sutisna proclaimed earlier this week that even though his country isn’t party to the South China Sea dispute, it “must be prepared for any possibility”, it what could be taken to be a subtle jab against China.

The islands of Java and Sumatra constitute 80% of Indonesia’s total population and economy, and even though they present a plethora of soft targets for terrorist groups, they’re not the only locations in the country that are vulnerable to such attacks.

© Flickr / Daniel Iversen
Western Counter-Terrorism Media Restrictions Might Threaten Democracy
Although typically not as recognized in the global mainstream media, there’s a very real terrorist threat in the eastern part of the country, one which has regularly turned quite violent but evades widespread attention because it occurs in the country’s periphery.

This part of Indonesia is very ethno-religiously diverse, but regretfully has been the scene of bloody communal cleansing campaigns since the fall of Suharto in 1998. Identity conflicts in the Maluku Islands, Sulawesi, and parts of Kalimantan have claimed the lives of hundreds of people, killed by a hodgepodge of Christian, Muslim, and local ethno-terrorist groups.

The most prominent of these groups has been the “East Indonesian Mujahedin” led by Santoso, a Wahhabi terrorist that had earlier pledged allegiance to Daesh.

He and his cohorts operate mostly in the mountainous jungle island of Sulawesi, specifically around the central city of Poso, and authorities have repeatedly commenced thousand-troop manhunts in their vain efforts to find him.

Santoso’s area of operations in Sulawesi puts him within close geographic distance of fellow Daesh-pledgers Abu Sayyaf in the southern Philippines, raising fears that the two terrorist organizations may pool their ‘caliphate’-creating resources in the future.

This dangerous prospect was even vaguely foreshadowed by Filipino House of Representative member Francisco Acedillo when he spoke about Daesh setting up shop in the region that he referred to as the “Mindanao-Sulawesi Arc” during the May 2015 Shangri-La Dialogue in Singapore.

Undoubtedly, even though Daesh may have stolen the spotlight in its latest attack on Jakarta, it still remains a frighteningly real destabilization threat in Indonesia’s distant and ethno-religiously diverse provinces.

On the home front, people are likely to support the government’s predicted efforts to beef up security and step up anti-terrorist raids all across the country in the immediate aftermath of the attack.

The authorities will predictably try to calm the citizenry down and assure them of their safety, despite the near-impossibility of being able to totally secure heavily populated Java.

Its 145 million people spread over just shy of 50,000 square miles makes it one of the most densely populated areas in the world, and consequently means that it’s extraordinarily difficult to completely defend. President Widodo is also likely to appeal to the international community in not overreacting to the incident, but will probably request multilateral information and intelligence cooperation in combating foreign terrorist recruitment and financing.

It’s guaranteed that the international community will voice statements of support for the government and sympathy for the victims, but certain actors may also take the initiative in seeking to promote their own political interests.

The US’ goal is to tighten its security relationship with Indonesia as a means of provoking China and enhancing the full-spectrum viability of the Pivot to Asia, so it’s expected that it’ll offer some form of direct or indirect assistance through either military advisors (such as the ones operating in the southern Philippines) or intelligence and other backend support.

Saudi Arabia will undoubtedly see a golden opportunity to lobby Indonesia to join the “anti-terrorist” coalition that it had earlier declined. Riyadh’s interest in doing this would be to solidify its presence along the Indian Ocean littoral and in having the normative benefit of claiming support from the world’s most populous Muslim nation.

If Indonesia joins forces with Saudi Arabia under the current context of tension that’s recently swept through the Mideast, then it would also implicitly be throwing its weight behind the Kingdom’s anti-Shiite plans and end up taking a thinly disguised sectarian position that would be completely out of character in its history.