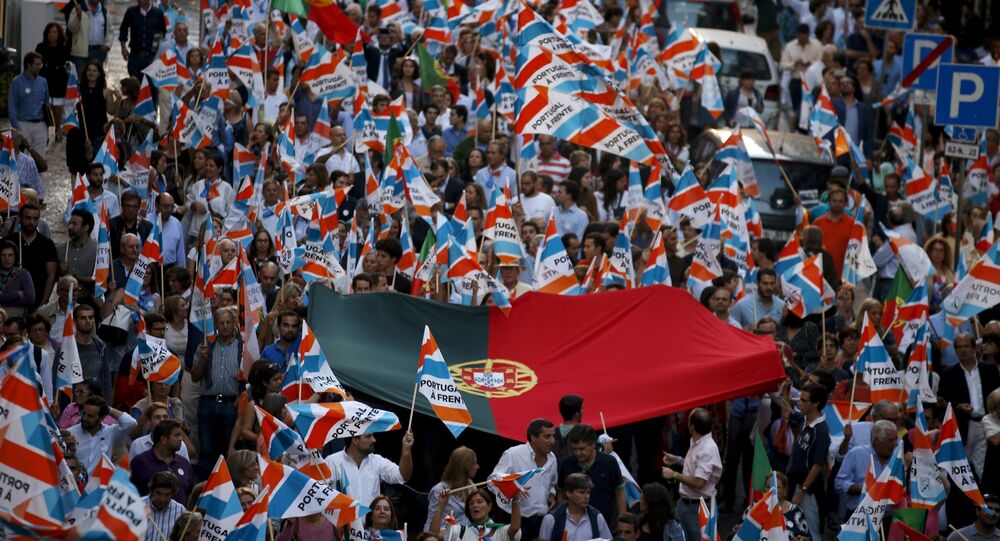 The austerity imposed on the Portuguese people by the One Percent has resulted in the election of a coalition government of socialists, communists, and a “left bloc.”

In the 20th century, socialism and the fear of communism humanized Europe, but beginning with Margaret Thatcher the achievements of decades of social reforms have been rolled back throughout Europe as bought-and-paid for governments have given all preference to the One Percent. Public assets are being privatized, and social pensions and services are being reduced in order to make interest payments to private banks.

Portuguese Parliament Forces Recently Formed Gov't to Resign
When the recent Portuguese vote gave a majority to the anti-austerity bloc, the right-wing Portuguese president, Anibal Cavaco Silva, a creature of Washington and the big banks, announced that the leftwing would not be permitted to form a government, just as the senior British general announced that a Labour Government formed by Jeremy Corbyn would not be permitted to form.

True to her word, Anibal reappointed the austerity prime minister, Passos Coelho. However, the unity of the socialists with the communists and the left bloc swept Coelho from office and the president had to recognize a new government.

The new government means that for the first in a long time there is a government in Portugual that possibly could represent the people rather than Washington and the One Percent. However, if the new government leaves the banks in charge and remains committed to the EU, the current president, previous prime minister, and previous finance minister, Maria Luis Albuquerque, will continue to work to overthrow the people’s will as occurred in Greece.

© AP Photo / Francisco Seco
Fears of Europe-Wide Anti-EU Revolt as Portuguese Leftists Claim Majority
In order to put the One Percent on the defensive, the new Portuguese government should begin investigations of Silva, Coelho, and Albuquerque.  It is possible that they received payoffs for turning Portugal over to the One Percent to be looted. The new Portuguese government should turn to the BRICS for trade and finance.

Otherwise, as in Greece, the Portuguese people will be defeated by the institutional arrangements comprising the Global World Order that the One Percent have put in place.

The Greeks are being publicly looted in full view by the One Percent, and the Greek government has submitted to the total ruination of Greece and the Greek people.

The same will happen to the Portuguese if the new government thinks that it can rule in a framework designed for rule by the One Percent. Without a Revolution, western peoples are doomed to penury and defeat. But there is no sign of a revolution in Portugal.

© AP Photo / Armando Franca
Portuguese Election Poll 'Dead Heat' Leads to Showdown Between Main Rivals
According to the Financial Times, representatives of the new socialist government have given reassurance that the new government will not abandon the austerity policies. Mario Centeno declared: “It’s not the direction we challenge, but the speed of travel.”

Centeno is a Harvard-trained neoliberal economist.  He told the Financial Times that the new government was committed to remaining in the EU and would continue with the austerity program, only at a slower pace in order to reduce the adverse effects on employment.  Centeno says that the new government has no intention of seeking debt writedowns. “Nobody with any sense thinks of not paying debts thay have contracted.”

In other words, things had to change in order to remain the same.

In his new book, Killing The Host, economist Michael Hudson makes many things clear, foremost of which is that as long as neoliberal economics reigns, so will the One Percent.

In the Western world democracy has been decapitated.  In Ireland, Greece, Portugal, Latvia, and the United States itself, there is no connection between the will of the people and the policies of the government. Only in tiny Iceland did the people prevail over the banks. Everywhere else the people are forced to pay for the gambling losses and leveraged debts of the financial sector.

What we are witnessing is the re-enserfment of Western peoples.