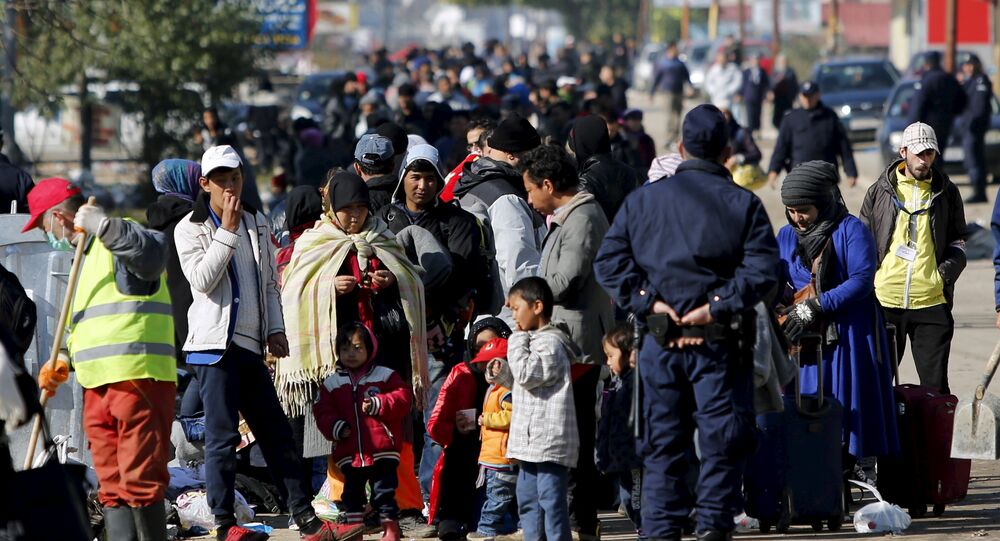 An eerily familiar sense of regional unease has crept over all the former republics of Yugoslavia.

Slovenian Prime Minister Miro Cerar echoed the Balkan zeitgeist when he warned at a press conference this week that:

"If the migrant crisis is not adequately controlled as agreed at the summit in Brussels there is a possibility of conflict situations between the states of the Western Balkans. It is possible that a small conflict would initiate a wider reaction because of the very difficult recent history (of the region), which is why it is very important that we solve this crisis together as no country can solve this problem by itself."

It seems like everybody knows that something foul is afoot, and the unsettling and anxious mood that has swept over the region is reminiscent of the atmosphere of 1991.

From Slovenia to the Republic of Macedonia, each constituent member of the former Yugoslavia is now infused with their own destabilizing vulnerabilities that have only been exacerbated by the "refugee crisis". Just like the last regional crisis over two decades ago, this one's also influenced by external forces, but unlike 1991, 2015 doesn't have to be the year that conflict erupts, and it's still entirely possible that the Balkan states can pull back from the brink in preserving the regional peace.

The history of the Balkans after the 1999 NATO War on Yugoslavia has been largely about the West's "Drang nach Suden" (Drive to the South) through the institutional vehicles of the EU and NATO. Slovenia and Croatia are already in both organizations, while the Muslim-Croat portion of Bosnia is their semi-protectorate. On the other hand, Republika Srpska, Serbia, Montenegro, and the Republic of Macedonia still remain outside the clutches of either of these overlapping blocs. This defining difference separates the region into the unipolar-obsessed and NATO-controlled Western Balkans and the multipolar-focused and NATO-free Central Balkans.

© Sputnik / Sergei Guneev
West Sees Red: 'Sympathy for Russia is Rising' in the Balkans
The comparison between each Balkan sub-region doesn't end there, however, since another crucial factor separating them is that the Central Balkans are the location of two multipolar megaprojects by Russia and China.

Russia would like to build the Balkan Stream (the author's more inclusive description of the Turkish Stream's full geographic scope) that would run through the Republic of Macedonia and Serbia, while China wants to build a "Balkan Silk Road" high-speed rail system between the Greek port of Piraeus and Budapest, transiting through Skopje and Belgrade. This has created obvious friction with the US, which plainly understands that the fulfillment of these complementary projects would spell the end of its domination dreams for the Central Balkans (and thus, the entire region), ergo its tinkering in trying to turn all of the Balkans back into a tinderbox.

If the US can't bring the Balkans under its boot, it'll break the region up and attempt to reorganize it once more afterwards, just as it did in 1991 when it knew it couldn't control the whole of Yugoslavia. The asymmetrical catalyst meant to inflame intra-regional tension and move forward with this scenario is the "refugee crisis", which is actually an artificially manufactured and highly politicized socio-economic "virus" that's infected the stabilizing organs of each Balkan state (much like "independence" did before it). Other than the direct effects of this major pan-regional problem, each of the countries is going through their own unique challenges or making choices that contribute to the overall destabilization of the Balkans:

The Alpine republic has threatened to fence off its border with Croatia, which is causing the rest of the countries "downstream" to fret about where else they could possibly redirect the migrant flows. Also, migrants that reach Slovenia are at risk of becoming uncontrollable because of how close they are to finally getting into Austria's Schengen Area, and the case of them torching their own tents in Brezice two weeks ago out of impatience set a disturbing precedent.

Following the example of its former imperial hegemon in Budapest, Zagreb has decided to go forward with fencing off its portion of the Serbian border too, exponentially multiplying the uneasy feeling that many Serbs have that they're being boxed in and forced to become an unwitting migrant-hosting camp. Worse still, Croatia is purchasing American-made multiple launch rocket systems (MLRS) that could potentially be refitted with 300 kilometer-range ballistic missiles, thus like forcing Serbia to seek a symmetrical response.

Other than what seems like an imminent arms race with Croatia, Serbia is battling asymmetrical aggression through Kosovo's campaign to enter UNESCO. Kosovar Albanians rampantly destroyed Serbian churches, cemeteries, and many other cultural monuments in over the past two decades, and UN "legitimization" of these ISIL-like crimes of historical destruction is absolutely unacceptable for Serbia, Russia, and other countries that vividly remember these despicable acts.

The Gulf- and Turkish-supported Islamization of society has led to intense social polarization, as did the failed UK-supported UNSC Resolution about Srbrenica that tried to pin all the blame on Republika Srpska. Russia responsibly vetoed the discriminatory measure, but the UK's sly move was indicative of the larger goal that the West and the Muslim-Croat entity in the country have of unilaterally revising the Dayton Agreement and dangerously trying to force a unitary state that would get rid of Republika Srpska.

A People's Revolution has sprung up against the corrupt and long-sitting leader's pro-NATO ambitions, but this has regretfully been met with unwarranted and excessive state violence against protesters, supportive parliamentarians, and reporters alike. As Montenegro approaches the December deadline where it might possibly be offered a NATO membership invitation, it's foreseen that the protests and reactionary state violence will only increase in crescendo.

© REUTERS / Darren Staples
Soros and Co. Harboring New 'Color Revolution'… This Time in Europe
The Republic is still under a Hybrid War threat, as the destabilizing Color Revolution and Albanian-affiliated terrorist scenarios remain very real possibilities in the near future. The crux of the issue is that the country's political crisis is intensifying due to the pro-Western "opposition's" refusal to abide by the original conditions of this summer's Przino Agreement. Zoran Zaev and Ali Ahmeti are fiercely trying to provoke social and ethnic discord that could horrifyingly result in a Hybrid War around this spring's early election.

The three thematic problems in the Balkans right now are the "refugee crisis", the American-initiated arms race between Croatia and Serbia, and the Hybrid War scheme against Macedonia. Here's how they can be resolved:

All the Balkan states have an interest in stemming the migrant flow, and the quickest and least regionally provocative way to do that is to pool their funds in fencing off the Macedonian border with Greece. Albanian Prime Minister Edi Rama warned last week that his country might become the next migrant transit zone owing to the very narrow Strait of Otranto that separates it from Italy, so the moment the Macedonian-Greek border is secured, these individuals will largely stop infiltrating north in favor of the more convenient Albanian ‘shortcut'.

© AP Photo / Dimitri Messinis
The Yugoslav Wars: Story of Serbian Genocide Still Remains Untold
Restoring the unity of the former Yugoslavia, even in a strategic multilateral sense between all of the currently independent former members, is just about impossible, but sub-regional integration within the Western and Central Balkans might offer the most pragmatic solution to easing neighborhood tensions. The Serbian and Croatian cores of each group have already decided on their divergent strategic orientations towards Russia and the US, respectively, and since not much can be done to temper their looming arms race, the most pragmatic thing each of them can do is consolidate and strengthen their existing regional partnerships.

Macedonians proudly showed the rest of the world that Color Revolutions can be defeated if the patriotic citizenry organized in defense of their country's sovereignty and proved that the majority of people are against the foreign plot. Their political awareness and understanding of the global context of their national crisis were instrumental in encouraging them to defy the destabilization attempt, and this model of resistance obviously rubbed off in encouraging their multipolar counterparts in Montenegro. Therefore, Democratic Security, the safeguarding and advancement of the true will of the people (as in Macedonia and Montenegro, respectively), will be the most pivotal factor going forward in determining whether the Central Balkans remain free or if they transform into Western fiefdoms.