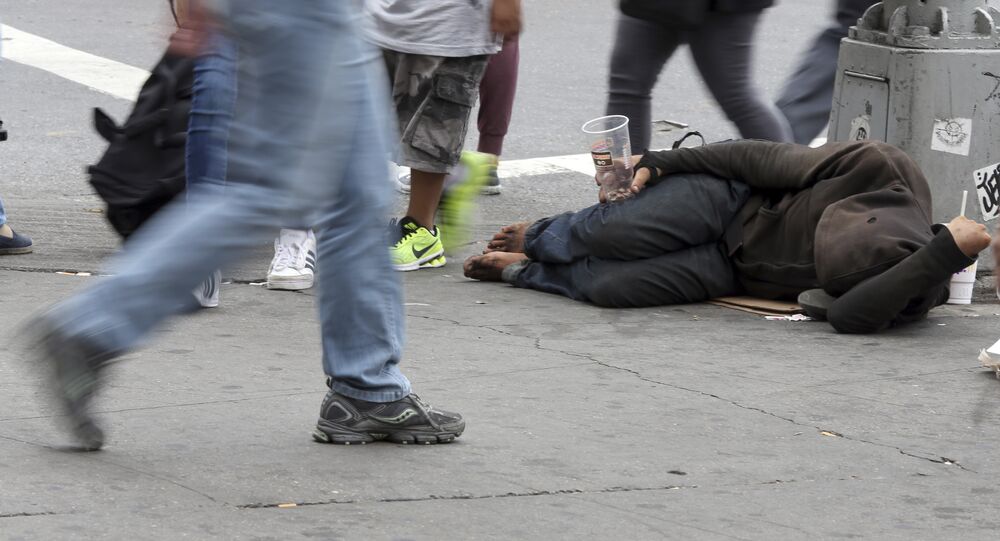 In 2004 Senator Charles Schumer and I predicted that the consequence of jobs offshoring would be that the US would become a Third World country in 20 years and the US is well on course to meeting the forecast.

© AP Photo / Kathy Willens
US Shares Decline Most in 4 Years on Emerging Markets Gloom
On January 6, 2004, Senator Charles Schumer and I challenged the erroneous idea that jobs offshoring was free trade in a New York Times op-ed. Our article so astounded economists that within a few days Schumer and I were summoned to a Brookings Institution conference in Washington, DC, to explain our heresy. In the nationally televised conference, I declared that the consequence of jobs offshoring would be that the US would be a Third World country in 20 years.

That was 11 years ago, and the US is on course to descend to Third World status before the remaining 9 years of my prediction have expired.

Only the top One Percent or less (mainly the 0.1%) has experienced growth in income and wealth.

Note that these declines have occurred during an alleged six-year economic recovery from 2009 to the current time, and during a period when the labor force was shrinking due to a sustained decline in the labor force participation rate. On April 3, 2015 the US Bureau of Labor Statistics announced that 93,175,000 Americans of working age are not in the work force, a historical record.  Normally, an economic recovery is marked by a rise in the labor force participation rate.  John Williams reports that when discouraged workers are included among the measure of the unemployed, the US unemployment rate is currently 23%, not the 5.2% reported figure.

In a recently released report, the Social Security Administration provides annual income data on an individual basis.  Are you ready for this?

The scarcity of jobs and the low pay are direct consequences of jobs offshoring.  Under pressure from "shareholder advocates" (Wall Street) and large retailers, US manufacturing companies moved their manufacturing abroad to countries where the rock bottom price of labor results in a rise in corporate profits, executive "performance bonuses," and stock prices.

The departure of well-paid US manaufacturing jobs was soon followed by the departure of software engineering, IT, and other professional service jobs.

© AP Photo / Sgt. Eliverto Larios/US Army
US Army to Cut Force by 40,000 Soldiers and 17,000 Civilian Employees
Incompetent economic studies by careless economists, such as Michael Porter at Harvard and Matthew Slaughter at Dartmouth, concluded that the gift of vast numbers of US high productivity, high value-added jobs to foreign countries was a great benefit to the US economy.

In articles and books I challenged this absurd conclusion, and all of the economic evidence proves that I am correct.  The promised better jobs that the "New Economy" would create to replace the jobs gifted to foreigners have never appeared.  Instead, the economy creates lowly-paid part-time jobs, such as waitresses, bartenders, retail clerks, and ambulatory health care services, while full-time jobs with benefits continue to shrink as a percentage of total jobs.

These part-time jobs do not provide enough income to form a household.  Consequently, as a Federal Reserve study reports, "Nationally, nearly half of 25-year-olds lived with their parents in 2012-2013, up from just over 25% in 1999."

When half of 25-year olds cannot form households, the market for houses and home furnishings collapses.

Finance is the only sector of the US economy that is growing.  The financial industry's share of GDP has risen from less than 4% in 1960 to about 8% today.  As Michael Hudson has shown, finance is not a productive activity.  It is a looting activity (Killing The Host).

Moreover, extraordinary financial concentration and reckless risk and debt leverage have made the financial sector a grave threat to the economy.

The absence of growth in real consumer income means that there is no growth in aggregate demand to drive the economy.  Consumer indebtedness limits the ability of consumers to expand their spending with credit.  These spending limits on consumers mean that new investment has limited appeal to businesses.

The economy simply cannot go anywhere, except down as businesses continue to lower their costs by substituting part-time jobs for full-time jobs and by substituting foreign for domestic workers. Government at every level is over-indebted, and quantitative easing has over-supplied the US currency.

This is not the end of the story. When manufacturing jobs depart, research, development, design, and innovation follow.  An economy that doesn't make things does not innovate. The entire economy is lost, not merely the supply chains.

The economic and social infrastructure is collapsing, including the family itself, the rule of law, and the accountability of government.

When college graduates can't find employment because their jobs have been offshored or given to foreigners on work visas, the demand for college education declines.  To become indebted only to find employment that cannot service student loans becomes a bad economic decision.

© REUTERS / Matt Mills McKnight
US Oil Rigs Number Declines
We already have the situation where college and university administrations spend 75% of the university's budget on themselves, hiring adjuncts to teach the classes for a few thousand dollars.  The demand for full time faculty with a career before them has collapsed.  When the consequences of putting short-term corporate profits before jobs for Americans fully hit, the demand for university education will collapse and with it American science and technology.

The collapse of the Soviet Union was the worst thing that ever happened to the United States. The two main consequences of the Soviet collapse have been devastating.  One consequence was the rise of the neoconservative hubris of US world hegemony, which has resulted in 14 years of wars that have cost $6 trillion.  The other consequence was a change of mind in socialist India and communist China, large countries that responded to "the end of history" by opening their vast under-utilized labor forces to Western capital, which resulted in the American economic decline that this article describes, leaving a struggling economy to bear the enormous war debt.

It is a reasonable conclusion that a social-political-economic system so incompetently run already is a Third World country.