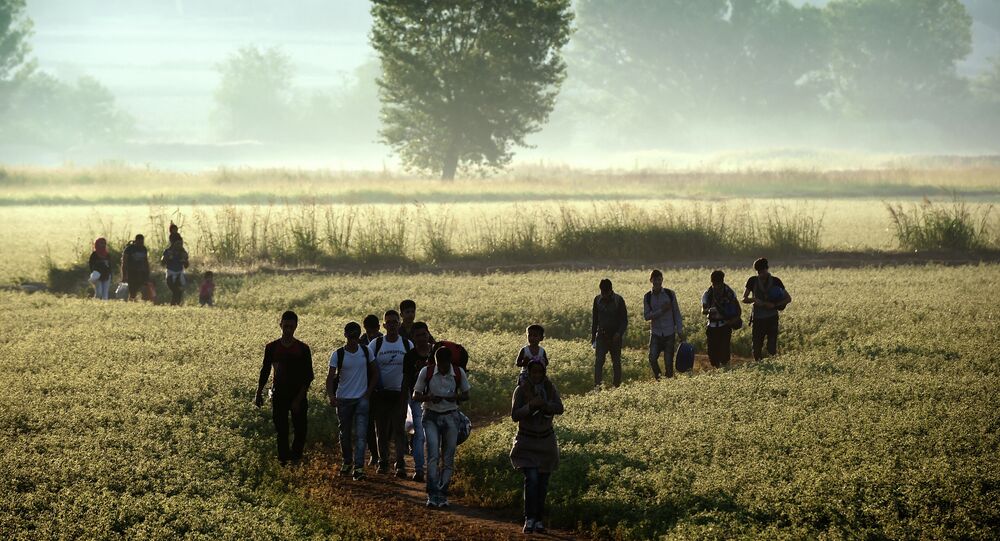 The uncontrollable refugee influx to the Balkans, politically orchestrated by Turkey, is having extremely negative consequences on regional relations.

© REUTERS / Marko Djurica
EU Plans to Turn Serbia Into Refugee 'Colony' in Exchange for Membership
One year ago, those who spoke of a possible return to Balkan rivalries would have been dismissed as fear mongers, nationalists, or worse, but lo and behold, 2015 has vindicated those individuals and provided irrefutable proof that intra-regional tension is brewing in the Balkans. The overwhelming surge of refugees traversing the region en route to the EU was initiated by Turkey, which made the political decision to release interned Syrian refugees and send them westward.

Erdogan's intent was to use the resulting problems they'd create as a form of blackmail in ‘negotiating' an accelerated path to EU membership for Turkey, and judging by the latest meeting he held with Merkel, the bloc is cowering in the face of his bullying and seems ready to cave in.

Everybody's talking about the two nodes of the refugee crisis — Turkey and Germany — but it seems like the world has forgotten about the unwilling geographic link between them, the Balkans, which has had to bear the brunt of this human flood much more than any of those two, and is now at serious odds with itself over this manufactured crisis.

Erdogan knew what he was doing when he finally set the hundreds of thousands of interned Syrian refugees loose from their camps, and it was to engender such humanitarian, social, and political crises in the EU that the bloc would be forced to grovel before him in begging the strongman to stop the flow at any cost. That's what happened when he traveled to Brussels and made the outrageous demand that the EU pay his country billions of dollars and give it a shortcut into the organization, proving that he intended to use the calculated refugee flows as blackmail all along.

There's a geostrategic aspect to all of this too, and it's that Turkish membership in the EU would totally transform the balance within it and create yet another obstacle to its possible reconciliation with Russia.

The EU would be so internally weakened, and its powers so diluted, by Turkish membership that a country with only 3% of its given territory in the continent would be in a position to indefinitely spoil any of its future outreaches to Russia.

This would obviously play to the US' grand strategy of separating the EU and Russia, so it's for this reason why the US takes such outlandish actions as bombing a power plant in Aleppo. It keenly knows that the worse it can make living conditions in Syria, the more refugees it can motivate to flee to Turkey, and with this, the more human pawns Erdogan can sacrifice in his quest to checkmate the European continent.

There's a common aphorism that "good fences make good neighbors", but that surely doesn't hold true for the Balkans. The former Yugoslav states, despite the 1990s history of internecine violence between some of them, had been carrying on quite peacefully with one another in the past decade, and that's without any fences between them. Once they started coming up this year, however, that's when regional relations hit a downward spiral, and as is typical in Balkan history, some states started blaming and teaming up against Serbia.

© AP Photo / Hadi Al-Abdallah
US War in Syria, Iraq Part of Bigger Plan Aimed Against Iran and Beyond
Hungary couldn't take the refugee flows any longer and controversially fenced off Serbia this summer, which diverted the refugee flows to Croatia and Slovenia. Zagreb is now following the lead of its former imperial sovereign in Budapest in constructing its own anti-Serbian fence, and Slovenia has just called in the military to reinforce its border with Croatia and is provocatively entertaining he possibility of its own "border fortifications".

What's being forgotten amidst the ‘fence race' is that Serbia isn't the cause of the problem, it's Turkey, and that Greece is the ‘frontline' country most responsible for halting this flow.

Athens hasn't ever tried to do anything constructive to stem the refugee tide that's been crashing into the Balkans, but the tiny Republic of Macedonia is a different matter. It took a valiant stand in protecting all of Europe last August by temporarily closing its border with Greece, but after a vicious information campaign was waged against it and its requests for international help were largely rebuffed, it had to backtrack and reopen the border. Greece has proven itself to be a lost cause for border control by this point, but if the EU and its Croatian, Hungarian, and Slovenian members really wanted to halt the refugee flows, they'd urgently help the Republic of Macedonia build its own border fence, the only one that could make a real and effective difference.

The situation is very critical at the moment, with thousands of disaffected refugees on the verge of rioting all throughout the region. Although they were only in Slovenia for just a couple of days already, refugees there torched one of their own camps in a sign of just how uncontrollably frustrated these "new neighbors" are becoming. Serbia is worried that the Hungarian and Croatian border fences will turn the country into one big refugee camp, with tensions at risk of boiling over both because the country doesn't want them and the stranded refugees don't want to be there in the first place.

In such a situation, Serbia wouldn't become a refugee camp, but a colony.

Evidence from analogous camps and ‘host' countries all across the world proves that refugees are more likely to procreate the longer they remain in one place, and Serbia would be no exception. If one defines a colony as being created when a large foreign population enters a region and begins populating it against the desires of the native inhabitants, then Serbia is at risk of being colonized. This process already happened in the Province of Kosovo with tragic results, but now it's occurring all throughout the country, and the "new neighbors" once more don't want to assimilate or integrate.

© REUTERS / Marko Djurica
Serbian Prime Minister Rules Out Building Border Fences Amid Refugee Crisis
All of this is perfectly okay with Turkey, however, since it seems to have given up on its Neo-Ottoman dreams in the Mideast and has now set its sights back toward the other land that it had previously occupied for centuries, the Balkans. Its neighborhood proxy in Tirana has its own regional ambition of Greater Albania that would greatly facilitate what Turkey is trying to achieve, and it's telling that both Balkan troublemakers are NATO members. Disturbingly, however, some Albanian forces have taken to terrorist means to achieve this shared goal, as was witnessed by the "Kosovo Liberation Army's" deadly shootout in the Macedonian city of Kumanovo in May. The return of Albanian terrorism and Turkey's plans to geo-culturally transform the Balkans raise serious concerns about what kind of regional disaster could unfold if the KLA armed disaffected refugees stranded in the Balkans and provoked them to riot in order in advance of this grand strategy.

The refugees themselves are not personally at fault for their plight — one must remember that they're just pawns in a larger game being orchestrated by the US and Turkey — but one should also keep in mind that just as the US was created by European "refugees" in North America, so too might a Neo-Ottoman Empire be revived by their contemporary Mideast analogues in the Balkans.