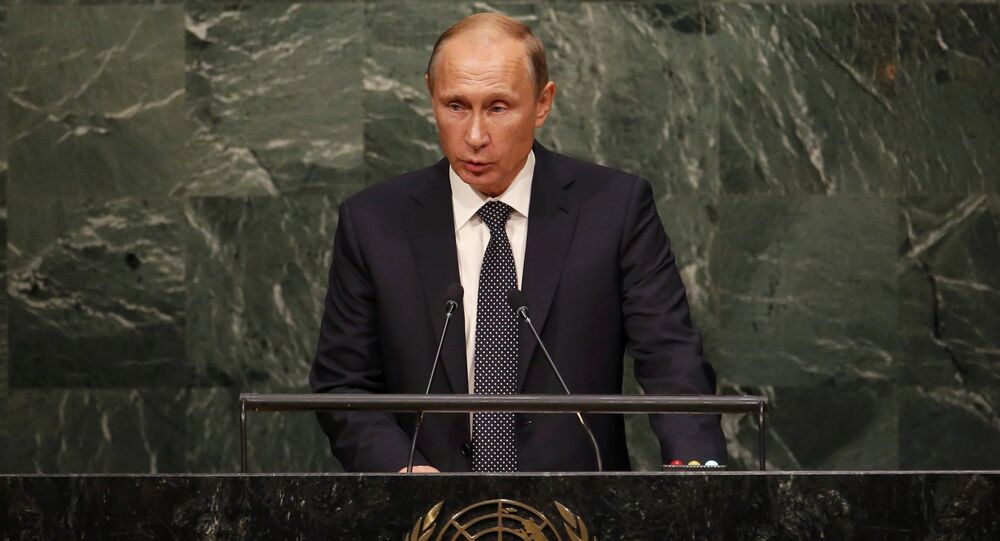 The distinguished and knowledgeable international commentator William Engdahl, in a superb statement, has expressed the view I gave you that Russian President Vladimir Putin’s speech on September 28 at the 70th anniversary of the United Nations changed the balance of power in the world.

© AP Photo / Susan Walsh
Knock Knock Knocking on Russia’s Door: Major US Allies Turn Away From Washington on Syria
Until Putin’s speech the world was intimidated by the Washington Bully. Resistance to Washington brought swift retribution. In the Middle East and Africa it brought economic sanctions and military invasions that destroyed entire countries. In France and other US vassal states it brought multi-billion dollar confiscations of bank net worth as the price of not following Washington’s policies toward other countries.

Other countries felt powerless in the face of the arrogant hegemonic Unipower, which from time to time replied to noncompliance with threats, such as US Deputy Secretary of State Richard Armitage delivered to Pakistan, to bomb noncompliant countries “back to the stone age.”

President Putin of Russia brought all that to end on September 28. He stood up before the world in the presence of the overflowing hubris of the hegemon and belled the cat.

Two days later he took over the war in Syria and began exterminating the Washington-financed and equipped Islamic State. Cruise missiles launched from the Caspian Sea hit ISIL targets with pinpoint accuracy and showed Washington’s EU vassals that Washington’s ABM system could not protect them if Europe permitted Washington to force Europe into conflict with Russia.

Washington’s response was more lies: “the missiles hit Iran,” said the idiots in Washington. The entire world laughed at the lie. Washington, some said, is whistling past its empire’s own graveyard.

Putin’s declaration of multi-polarity was seconded by the President of China, who said in his understated mild way that every country must participate in shaping the future and not just follow the leadership of one.

The hegemonic Unipower ceased to exist on September 28.

This is a sea change. It will affect the behavior of every government. Even some of the craven vassals states, whose “leaders” are bought-and-paid-for, will move toward a more independent foreign policy.

Russian Defense Ministry
US Analyst: How the Syria Game Has Changed, and Why Russia Will Win It
The remaining danger is the crazed American neoconservatives. I know many of them. They are completely insane ideologues. This inhuman filth has controlled the foreign policy of every US government since Clinton’s second term. They are a danger to all life on earth. Look at the destruction they have wreaked in the former Yugoslavia, in Ukraine, in Georgia and South Ossetia, in Africa, in Afghanistan and the Middle East. The American people were too brainwashed by lies and by political impotence to do anything about it, and Washington’s vassals in Europe, UK, Canada, Australia, and Japan had to pretend that this policy of international murder was “bringing freedom and democracy.”

The crazed filth that controls US foreign policy is capable of defending US hegemony with nuclear weapons. The neoconservatives must be removed from power, arrested, and put on international trial for their horrendous war crimes before they defend their hegemony with Armageddon.

© Sputnik / Alexei Druzhinin
Putin Emphasizes Need to Put a Stop to Extremism Before it Spreads
Neoconservatives and their allies in the military/security complex make audacious use of false flag attacks. These evil people are capable of orchestrating a false flag attack that propels the US and Russia to war.The neocons are also capable of plotting Putin’s assassination. The crazed John McCain, whom idiotic Arizonans keep returning to the US Senate, has publicly called for Putin’s death, as have other former federal officials, such as former CIA official Herbert E. Meyer, who publicly called for Putin’s removal “with a bullet hole in the back of his head.” I am confident that the neoconservatives are plotting Putin’s assassination with their Chechen terrorist friends. Unlike the US president, Putin often presents himself in open situations.

Here is William Engdahl’s superb statement from the New Eastern Outlook, October 15, 2015. It is clear that the neoconservatives are not sufficiently realistic to accept this change in the power balance and will resist it to the point of war.