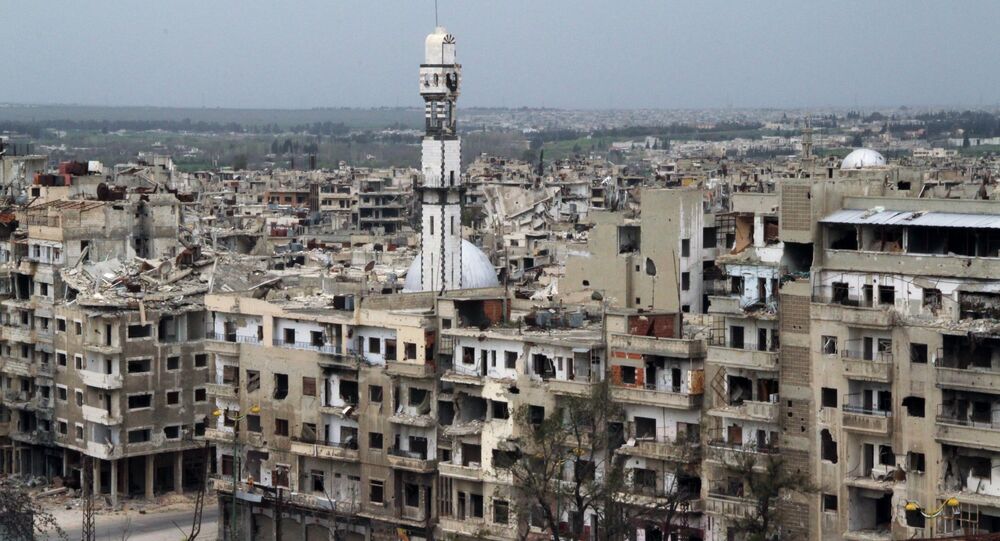 US Must Call Off Dogs of War in Syria

Ambiguity can be a useful skill in diplomatic engagement. It can wrong-foot adversaries, or otherwise tamp down tensions to avoid confrontation. But there is a danger that ambiguity can rebound badly by blurring reality, thereby impairing decisive action when decisive action is actually the best tactic.

Take Russia’s preferred lexicon of “partners” when referring to Washington and its various allies. The use of the term no doubt has served well to frustrate belligerent Western attitudes. But is there a danger that such polite engagement creates a false sense of negotiation? Or, worse, an unhelpful distraction from Russia’s priorities?

Moscow has magnanimously offered partnership to Washington and its allies over the immediate challenge of defeating terrorism in Syria.

Moscow has called on the United States to coordinate military operations, although, it has to be said, to not much avail so far.

Both sides reportedly expressed willingness to prevent the “formation of a terrorist caliphate” in Syria under the control of the Islamic State group and other associated jihadists.

But, unambiguously, Russia knows full well that the American and Saudi “partners” are the principal sponsors of the jihadist mercenary armies that have been destroying Syria for the past nearly five years.

Washington and its Saudi and other regional allies may talk out of the side of their mouths about “degrading and defeating” the Islamic State and other terror groups. But the reality is that Syria would not be in the dire condition of 250,000 dead, $100 billion worth of infrastructure decimated and millions of refugees if it were not for the US-led covert criminal war for regime change in that country.

Leaked US official cables testify that Washington was plotting to overthrow Syrian President Bashar al-Assad from as early as 2006 – five years before the Western-orchestrated uprising began in March 2011.

© Sputnik / Michael Alaeddin
EU in Disarray on Assad Role in Syrian Transition, But Position Likely Won’t Make Obama Happy
US President Barack Obama and his top diplomat John Kerry have repeatedly insisted that Assad must stand down in any eventual political outcome. In other words, the Americans want regime change by hook or by crook against what is, as Putin has clearly stated, the “legitimate government of Syria” – and a long-time strategic ally of Russia to boot.

Again this week, the Saudi rulers reiterated the same objective during their visit to Moscow. Saudi Foreign Minister Abel al-Jubeir may have talked about military cooperation with Russia in Syria, but the bottom-line for the House of Saud is that Assad “must go”.

This imperative demanded by Washington and its Saudi ally is an outrageous ultimatum – especially coming from an unelected dictatorship that imprisons tens of thousands of its own people for daring to call for democratic rights in the oil-rich kingdom.

Moreover, in recent days it has been reported that the Obama administration and the Saudis are to step up their supply of anti-tank weapons to the jihadi mercenaries in Syria.

© Flickr / DVIDSHUB
Old New Story? US Military Airdrops Tons of Ammo to New Rebel Group in Syria's North
The BBC reports: “The well-placed [Saudi] official, who asked not to be named, said supplies of modern, high-powered weaponry including guided anti-tank weapons would be increased to the Arab- and western-backed rebel groups fighting the forces of Syria's President Bashar al-Assad and his Russian, Iranian and Lebanese allies. He said those groups being supplied did not include either Islamic State (IS) or al-Nusra Front, both of which are proscribed terrorist organisations. Instead, he said the weapons would go to three rebel alliances – Jaish al-Fatah (Army of Conquest), the Free Syrian Army (FSA) and the Southern Front.”

Who is the BBC trying to kid? One of the recipients of Saudi-supplied weapons – the Army of Conquest – is known to be affiliated with the Al-Qaeda network. As for the other supposed “moderate rebels” it is abundantly clear by now that that depiction is a ridiculous fiction and that these groups operate like a revolving door, exchanging fighters and weapons.

The New York Times also reported that the Obama administration, while cancelling its failed program to train “moderate rebels”, is now planning to send arms, including anti-tank missiles, directly to “vetted” rebel groups. “The new program would be the first time the Pentagon has provided lethal aid directly to Syrian rebels, though the CIA has for some time been covertly training and arming groups fighting Mr Assad,” notes the Times.

© REUTERS / Hosam Katan
Run and Desert: US Strategy to Train Syrian Rebels Was Doomed From Start
The Washington Post also reported this week that the BGM-71 TOW anti-tank missiles previously supplied to Syria by the CIA are now going to be increased. “Now that Russia has entered the war in support of Assad, they are taking on a greater significance than was originally intended… [it] amounts to proxy war of sorts with Moscow.”

What seems clear then is that the interests of Russia and the US in Syria are fundamentally irreconcilable. Washington and its Saudi client are motivated by regime change against Moscow’s ally, and they are moving to escalate arms supplies to their mercenary terror networks fighting to topple the Syrian government and its allies – Russia and Iran.

The notion that Washington and Saudi Arabia could be called upon to form an “anti-terror” front is not just misplaced wishful thinking. It a dangerous ambiguity. Washington and its cronies are not “partners”.

They are implacably working to undermine Russia, and worse, to draw Moscow into an “Afghanistan-type” quagmire.

This deeper enmity towards Russia should be of no surprise. Earlier this year, Russia’s top national security official Nikolai Patrushev warned that Washington was trying to topple the Russian government of Vladimir Putin through “colour revolutions” in former Soviet republics, including Ukraine. By extension, Syria is following the same US script aimed at undermining Russia.

Rather than betting that the United States and its clients might somehow be counted on to fight terrorism in Syria, Moscow would be better defining more clearly who is the root cause of conflict. The logical thing to do then is to not engage with poisonous “partners” – but instead to unambiguously state terms for ending the conflict. One such term would be for the US and its clients to call off their dogs of war in Syria.

NATO to Stay Away From Syria Conflict – Stoltenberg