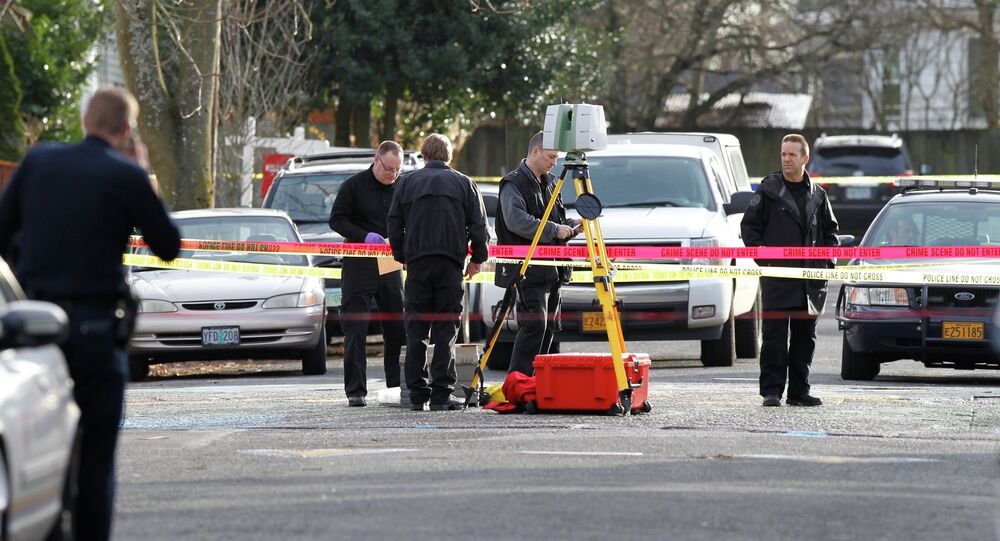 Mass Killing is the American Way

Another week and another mass shooting in the United States. The latest atrocity was at a college in Oregon, where at least 10 people were killed when a lone gunman went on a shooting spree. Several others were critically maimed. This year alone, there have been 300 such mass shootings across the US. Almost one every day.

© AP Photo / Joe Burbank
George Zimmerman Compares ‘Piece of Sh*t’ Obama to Oregon Shooter
The day after the Oregon massacre, another US-related mass killing occurred, this time in northern Afghanistan. A US air strike on a hospital in Kunduz killed at least 19 people, including medical staff and patients who were burned alive in their beds.

Is there a link? You better believe it, because mass killing is the American way. And yet Washington has the barefaced audacity to rebuke Russia for its latest air strikes against terror groups in Syria, claiming that they are targeting civilians, without providing any evidence.

On the Oregon shooting, US President Obama spoke of the latest tragedy with audible anger in his voice, expressing anguish at the relentless death toll from gun violence in his country. It was the 15th time as president that he has had to offer his condolences to the nation in the aftermath of such killings.

“We are the only advanced country on Earth that has seen these mass shootings every few months,” said Obama.

The American president reiterated his call for the US Congress to legislate for stricter gun control as a step to rein in the pervasive violence. Pointing out that the United States has more privately held guns than every man, woman and child – more than 300 million – Obama said that ownership of firearms does not make his nation any safer. On the contrary the “right to bear arms” as provided by the US constitution is part of the problem.

© AP Photo / Greg Allen
Oregon Campus Massacre: Trump Shrugs, Says ‘What Are You Gonna Do?’ (VIDEO)
The lobbying power of gun manufacturers – a multibillionaire dollar industry – and advocates such as the National Rifle Association have acted to dissuade US lawmakers from inaugurating stricter firearms controls. That surely is a factor in why deadly weapons are so easily available to the US population, including individuals who are evidently mentally disturbed, as the latest shooter in Oregon appears to have been.

Another factor is racism. Earlier this year, a young white supremacist entered an African-American church in Charleston, South Carolina, and shot dead nine worshippers during a prayer meeting, including the pastor. His motive was to kill people simply on the basis of their skin colour.

But there is another factor. What Obama and others in the Washington political establishment appear oblivious to is the profound nature of state violence in the US. America is a state whose official use of mass violence is endemic. The heinous targeting of a hospital in Kunduz, Afghanistan, is testament to that.

In the US, police violence claims hundreds of victims every year. Official statistics show that almost every day a person in the United States is killed from police officers using lethal force. The majority of police victims are African-American or from other ethnic minorities.

In footage from the Oregon shooting scene this week one image that barely registered any commentary was how police officers responding to the incident were heavily armed with assault rifles and clad in army-style uniforms. Of course, we could say that the law enforcement officers had to take precautions in a life-threatening situation. But all too often, routinely, US police forces have taken on the appearance and methods of heavy combat units akin to war zones.

American society has increasingly become a war zone owing to the excessive lethal violence adopted by the authorities towards the general populace. An atmosphere of violence wielded by the police with impunity where children in play parks are shot dead because they happen to be holding a toy gun, or where a black man is shot in the back multiple times by a police officer over a minor traffic incident.

But America’s endemic violence goes much deeper and is far more insidious. President Obama may deplore the “sickness” of individuals going into a classroom and murdering innocent students.

However, what about the thousands of innocent people who are killed each year around the world from American warplanes and aerial drones? In the bombing of the Kunduz hospital by US forces this week, the medical staff said they had repeatedly phoned through to the American military to tell them that the hospital had been hit. But the air strikes continued for another 30 minutes, repeatedly. The United Nations has since condemned the attack as a war crime.

© AFP 2020 / Cengiz Yar Jr.
Oregon Gunman Asked Students About Their Religion Before Killing Them
Obama has previously even bragged that his military forces have bombed seven countries since he took office. They include Afghanistan, Iraq and Libya where American military have killed tens of thousands of civilians in a so-called “war on terror” over the past 14 years.

Obama has arrogated the executive power to draw up assassination targets in any part of the world. Under his orders and without any judicial oversight, US drones have killed hundreds of terror “suspects” in Pakistan, Yemen and Somalia. Many of the victims have been later found to be innocent civilians.

In Yemen, American-supplied Saudi warplanes and helicopters have over the past six months killed thousands of civilians in air strikes on residential areas, according to the United Nations human rights monitors. Last week, in the port city of Mokha, more than 130 civilians were blown to pieces by Saudi fighter jets. Most of the victims were women and children. Washington has given the green light to this ongoing slaughter in Yemen.

The rampant gun violence that is mutilating American society – claiming over 30,000 lives every year – has indeed many factors. But the least talked about factor is the systematic violence that the US rulers inflict on the rest of the world with seeming impunity.

Violence and mass killing are embedded in the psyche of the American population. And it is embedded by the very politicians who stand up in Washington to deplore the latest mass shooting at a college in Oregon.