Russia’s anti-terrorist intervention in Syria is just as much about snuffing out domestic security threats as it is about international ones.

Russia’s lawmakers just approved the use of the country’s armed forces abroad, in what makes for a jaw-dropping game-changer in the War on Terror. Up until this point, the US took for granted the assembling of international coalitions, be they against ‘terrorism’ or whatever else, feeling conceited enough that its unipolar hegemony would guarantee that it dictates, not directs, what comes next after it’s already made up its mind. However, the world has rapidly changed as of late, and the multipolar trend has proven itself to be unstoppable, with the case in point being how Russia has now usurped the US as the world’s most important multilateral rallying force. Unlike the US, Russia is showing that it’s entirely possible to gather an international alliance that both abides by international law and is genuinely dedicated to pursuing its stated objectives.

Let’s take a look at some of the triggers and tactics behind Russia’s recent move, and then briefly reflect on the main takeaways from this decision.

If one digs deep enough, the overarching trigger for Russia’s anti-terrorist response in the Mideast boils down to American Exceptionalism and the aggressive abuse of unipolar privilege after the end of the Cold War. Keeping with the article’s topical context, however, one can most directly see this manifested by the outbreak of American-supported terrorism in support of the “Arab Spring” Color Revolutions and the subsequent Hybrid Wars in Libya and Syria. When the US’ ISIL proxy got too big to directly control in Syria, yet still remained unable to defeat the Syrian Arab Army (SAA) and the state-civilization’s patriotic population, Washington publicly disowned it (while never previously admitting to having sided with it in the first place) and announced a so-called “coalition” to fight against it.

© AFP 2019 / MAHMOUD TAHA
'Russia Needs Security in the Whole of the Middle East, Not Just in Syria'
This was nothing more than a doubly convenient ruse to achieve two complementary geopolitical objectives: corral ISIL in a direction mutually advantageous for both it and the US (against the SAA and in support of regime change); and then turn the regime change coalition (which is what the US’ “anti-ISIL” coalition has really been about) against the terrorists after they’ve served their purpose of overthrowing the state on the US’ behalf. Again, the US and its terrorist proxies had their plans scuttled by the SAA and Syria’s citizens, and the longer the charade played out, the more that foreign fighters, especially thousands of those born in Russia, streamed into the battlefield.

With time, the US began considering ways to bring its regime change war to a climactic and quick close, and hence why, through a series of diplomatic and strategic maneuverings, it eventually gained the right to fly bombing missions out of Turkey’s Incirlik Air Base. Some observers, such as the author himself, coupled this announcement with the US and Turkey’s existing aggression against Syria in forecasting what appeared to be an imminent formal and full-blown invasion of Syria. If this would have happened, then as Russia had been predicting for years, the terrorist forces there would have become globally uncontrollable and would thus threaten the rest of the world.

It’s thus no coincidence that it was precisely around the time of the Incirlik decision that Russia ramped up its diplomatic initiatives to save Syria, and the reasons were twofold: Russia faces an acute domestic threat from the return of Russian-passport-holding jihadis, which have only been growing in number; and the geopolitical consequences of an American-Turkish invasion of Syria would have destabilized the entire planet.

Faced with such pressing security threats both to itself and to the UN-established international system, Russia chose to act in order to protect global stability. 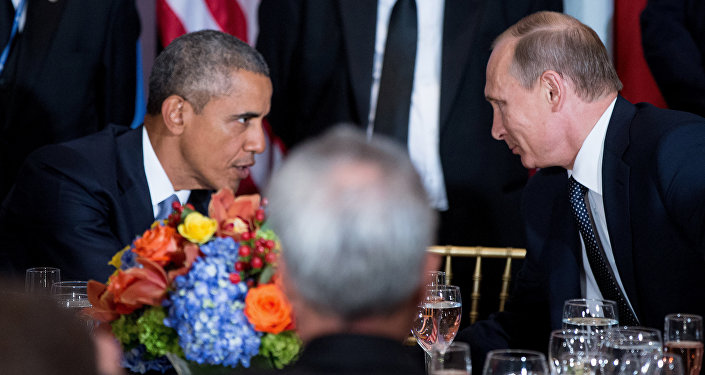 © AP Photo / Andrew Harnik
White House Sums Up Results of Putin-Obama Meeting: Syria's Issue
Ideally, Russia had hoped to assemble a world-wide anti-terrorist coalition incorporating all of the existing anti-ISIL forces (including those that are “anti-terrorist” in name only, like the US). Unfortunately, however, it doesn’t seem as though the Western forces currently engaged in the illegal bombing of the Syrian Arab Republic are interested in cooperating with the genuine anti-terrorist coalition directed by Russia. The US’ Gulf allies have been conspicuously silent as of late, which can likely be read as both their refusal to overtly join Russia’s initiative and also as a form of ‘face-saving’ retreat in abandoning the US’ failed “coalition”. So far, the most concrete mechanism for Russia’s anti-ISIL coalition is the Baghdad-based coordination center set up between Russia, Syria, Iraq, and Iran, and truth be told, even if other partners don’t officially join the Moscow-led War on Terror, it can still handle the challenge on its own via this quadrilateral framework.

As it stands, there’s a concrete division of labor within the coalition. Russia has stated that it will not be sending its ground forces into the conflict, but will instead assist with air strikes when called upon to do so by the SAA.

Therefore, the ground component will be composed of the SAA and the Kurdish militias, “the only forces really fighting terrorists in Syria”, as to use the words President Putin employed during his UN General Assembly address.

Additionally, to cite the President’s interview with Charlie Rose, President Assad isn’t “confronted with what some of our international partners interpret as an opposition. In reality, al-Assad's army is fighting against terrorist organisations”, so given this statement of fact, it should be understood that Russia and the SAA will be fighting against all terrorist groups, not just ISIL, as they seek to fully liberate the country. The US and its regime change allies may predictably object to this, but the reality of the situation is that their “provision of military support to illegal structures runs counter to the principles of modern international law and the United Nations Charter”, and that by acting in accordance with UN norms, Russia and Syria will thus wipe out all of these illegal and terrorist entities. Considering Iran’s participation into the coordinated structure centered in Baghdad, it, too, could possibly partake in anti-terrorist airstrikes or ground operations in the future, albeit most likely in Iraq.

There are three principle takeaways from the deployment of Russia’s anti-ISIL coalition:

The Bear Is Back:

Russia is now the most important external actor in the Mideast, and it’s capable of engaging in constructive diplomacy with all actors. Moscow is restoring order out of the chaos that Washington has provoked, which is rather ironic in a geopolitical sense. The US proclaimed a “New Middle East” in 2006 during Israel’s War on Lebanon, but it obviously did not have this eventual vision in mind, one in which Russia strengthens sovereign states, reinforces their central governments, and effectively and militarily eliminates terrorists.

The Emperor Has No Clothes:

Russia’s efforts in the Mideast have exposed the US’ “anti-terrorist” operations there as a fraud. The rest of the world can presently see that the US only evokes such claims as ‘fighting terrorists’ in order to sew ‘plausible justifiable’ window dressing for pursuing its own self-interested geopolitical goals, such as regime change in the case of Syria. The emperor has no clothes, and some might say that this universal realization brings him one major step closer to being dethroned.

The Coalition Of The Righteous vs The Rogue State:

© Flickr / Steve Gardner
US Planned War on Terror in 92 Countries Four Days After 9/11
Bridging together the two takeaways mentioned above, Russia is proudly leading the pack in fighting against terror, respecting state sovereignty, and strengthening the UN and international law, or in other words, supporting all that is righteous in international relations. On the other hand there’s the US, which has been proven to have blatantly violated each of these three fundamental principles of global order in trying to indefinitely prolong its unipolarity. To channel George W. Bush, “you’re either with us or against us”, but this time, it seems like the rest of the world has listened to President Putin, realizes what the US has done, and finally ready to turn the tables on the rogue state.

The War on Terror, America’s Bullying of Vietnam, and American Narcissism