In his UN General Assembly address, Obama attempted to cover up Washington's massive war crimes, crimes that have killed and displaced millions of peoples in seven countries, with feel good rhetoric about standing up to dictators.

Today is the 70th anniversary of the UN. It is not clear how much good the UN has done. Some UN Blue Hemet peacekeeping operations had limited success. But mainly Washington has used the UN for war, such as the Korean War and Washington's Cold War against the Soviet Union. In our time Washington had UN tanks sent in against Bosnian Serbs during the period that Washington was dismantling Yugoslavia and Serbia and accusing Serbian leaders, who tried to defend the integrity of their country against Washington's aggression, of "war crimes."

© REUTERS / Kevin Lamarque
Arms Over Armistice: Obama Vows to Back Belligerent Ukraine
The UN supported Washington's sanctions against Iraq that resulted in the deaths of 500,000 Iraqi children. When asked about it, Clinton's Secretary of State said, with typical American heartlessness, that the deaths of the children were worth it. In 2006 the UN voted sanctions against Iran for exercising its right as a signatory of the non-proliferation treaty to develop atomic energy. Washington claimed without any evidence that Iran was building a nuclear weapon in violation of the non-proliferation treaty, and this lie was accepted by the UN. Washington's false claim was repudiated by all 16 US intelligence agencies and by the International Atomic Energy Agency inspectors on the ground in Iran, but in the face of the factual evidence the US government and its presstitute media pressed the claim to the point that Russia had to intervene and take the matter out of Washington's warmonger hands. Russia's intervention to prevent US military attacks on Iran and Syria resulted in the demonization of Russia and its president, Vladimir Putin. "Facts?!, Washington don't need no stinkin' facts! We got power!" Today at the UN Obama asserted America's over-riding power many times: the strongest military in the world, the strongest economy in the world.

The UN has done nothing to stop Washington's invasions and bombings, illegal under international law, of seven countries or Obama's overthrow by coup of democratic governments in Honduras and Ukraine, with more in the works.

The UN does provide a forum for countries and populations within countries that are suffering oppression to post complaints-except, of course, for the Palestinians, who, despite the boundaries shown on maps and centuries of habitation by Palestinians, are not even recognized by the UN as a state.

On this 70th anniversary of the UN, I have spent much of the day listening to the various speeches. The most truthful ones were delivered by the presidents of Russia and Iran. The presidents of Russia and Iran refused to accept the Washington-serving reality or Matrix that Obama sought to impose on the world with his speech. Both presidents forcefully challenged the false reality that the propagandistic Western media and its government masters seek to create in order to continue to exercise their hegemony over everyone else.

What about China? China's president left the fireworks to Putin, but set the stage for Putin by rejecting US claims of hegemony: "The future of the world must be shaped by all countries." China's president spoke in veiled terms against Western neoliberal economics and declared that "China's vote in the UN will always belong to the developing countries."

In the masterly way of Chinese diplomacy, the President of China spoke in a non-threatening, non-provocative way. His criticisms of the West were indirect. He gave a short speech and was much applauded.

Obama followed second to the President of Brazil, who used her opportunity for PR for Brazil, at least for the most part. Obama gave us the traditional Washington spiel: 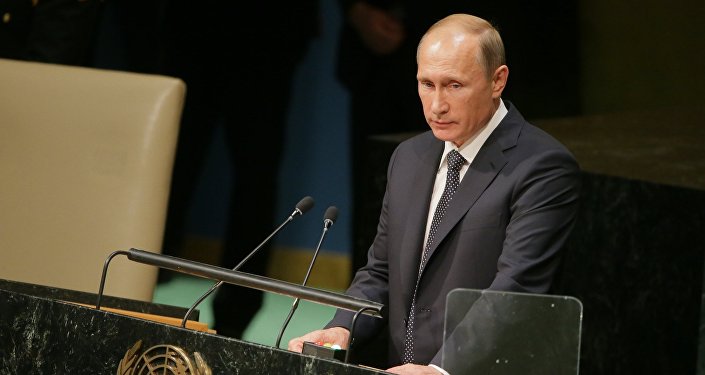 © Sputnik / Mihail Metzel/POOL
Vladimir Putin Delivers Speech at Historic 70th Session of UN General Assembly (VIDEO)
The US has worked to prevent a third world war, to promote democracy by overthrowing governments with violence, to respect the dignity and equal worth of all peoples except for the Russians in Ukraine and Muslims in Somalia, Libya, Iraq, Afghanistan, Syria, Yemen, and Pakistan.

Obama declared Washington's purpose to "prevent bigger countries from imposing their will on smaller ones." Imposing its will is what Washington has been doing throughout its history and especially under Obama's regime.

All those refugees overrunning Europe? Washington has nothing to do with it. The refugees are the fault of Assad who drops bombs on people.

When Assad drops bombs it oppresses people, but when Washington drops bombs it liberates them. Obama justified Washington's violence as liberation from "dictators," such as Assad in Syria, who garnered 80% of the vote in the last election, a vote of confidence that Obama never received and never will.

Obama said that it wasn't Washington that violated Ukraine's sovereignty with a coup that overthrew a democratically elected government. It was Russia, whose president invaded Ukraine and annexed Crimera and is trying to annex the other breakaway republics, Russian populations who object to the Russophobia of Washington's puppet government in Ukraine.

Obama denied that the US and Israel employ violence. This is what Russia and Syria do, asserted Obama with no evidence. Obama said that he had Libya attacked in order to "prevent a massacre," but, of course, the NATO attack on Libya perpetrated a massacre, an ongoing one. But it was all Gaddafi's fault. He was going to massacre his own people, so Washington did it for him.

Did the UN General Assembly buy it? Probably the only one present sufficiently stupid to buy it was the UK's Cameron. The rest of Washington's vassals went through the motion of supporting Obama's propaganda, but there was no conviction in their voices.

© AFP 2019 / DON EMMERT
Putin Offers Realistic, Constructive Approach to Syria - Think Tank
Vladimir Putin would have none of it. He said that the UN works, if it works, by compromise and not by he imposition of one country's will, but after the end of the Cold War "a single center of domination arose in the world"-the "exceptional" country. This country, Putin said, seeks its own course which is not one of compromise or attention to the interests of others.

Putin said that Washington repeats its mistakes by relying on violence which results in poverty and social destruction. He asked Obama: "Do you realize what you have done?"

Putin said that "ambitious America accuses Russia of ambitions" while Washington's ambitions run wild, and that the West cloaks its aggression as fighting terrorism while Washington finances and encourages terrorism.

The President of Iran said that terrorism was created by the US invasion of Afghanistan and Iraq and by US support for the Zionist destruction of Palestine.

Obama's speech made clear that Washington accepts no responsibility for the destruction of the lives and prospects of millions of Muslims. The refugees from Washington's wars who are overflowing Europe are the fault of Assad, Obama declared.

Obama's claim to represent "international norms" was an assertion of US hegemony, and was recognized as such by the General Assembly.

What the world is faced with is two rogue anti-democratic governments-the US and Israel-that believe that their "exceptionalism" makes them above the law. International norms mean Washington's and Israel's norms.

The presidents of Russia, China, and Iran did not accept Washington's definition of "international norms."

The lines are drawn. Unless the American people come to their senses and expel the Washington warmongers, war is our future.