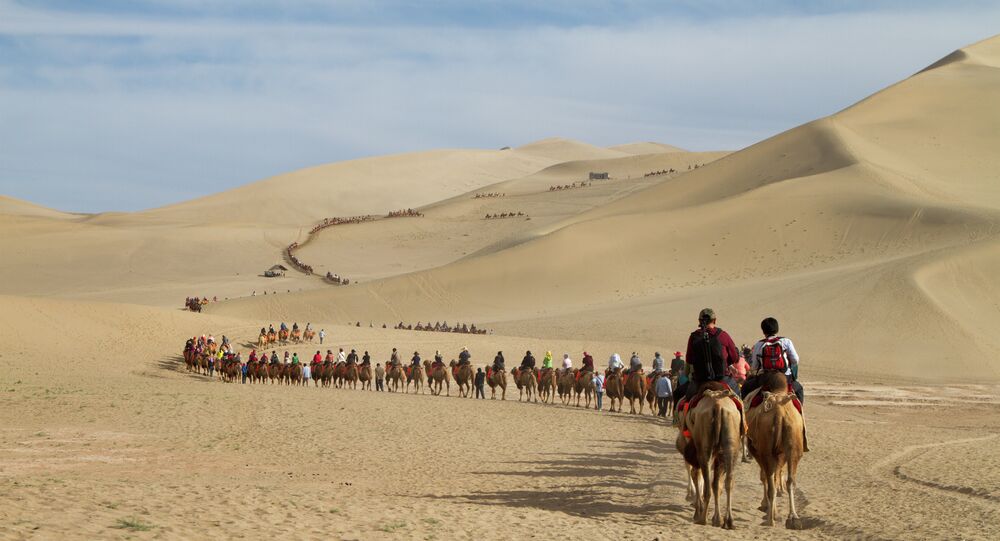 The Yangtze River International Forum Summit 2015 put the final piece into the One Belt One Road jigsaw.

The Jiangsu Association for Friendship and International Exchanges initiated the second annual Yangtze River International Forum in Lianyungang, a port city in the Chinese province of Jiangsu.

The big-time event brought together China’s leading academic and business leaders to discuss the details and direction of the One Belt One Road (OBOR) project, otherwise popularly known as The New Silk Road.

While the information presented at the Summit was too extensive to list in full, the most important takeaway was that China’s elite have determined that Lianyungang will be the ultimate bridge in linking together the mainland and maritime portions of OBOR, thus positioning it as one of Eurasia’s most promising cities and making it a prime location for observers to excitedly watch in the coming future.

© AFP 2021 / PHILIPPE LOPEZ
Chinese Commodity Exchange to Open Trade Platform for Silk Road Countries
Any conversation about Lianyungang’s geostrategic significance would be out of context without first talking about OBOR and what it’s really all about. As revealed at the Forum, its primary goal is to create a system to facilitate Chinese outbound investment, which is necessary in order to maintain the country’s economic growth as it transitions into a more mature and developed economy.

The political and structural changes that this entails are collateral effects from pursuing this primary objective, and they’re not necessarily the main force driving China’s ambitions.

As explained by Dr. Pang Zhongyin, currently the Dean of the School of International Studies at Sun Yat-Sen University and one of China’s most prominent academic figures due to his extensive career, people shouldn’t overestimate nor underestimate OBOR’s goals.

He described their ultimate impact as being a “Renewed World Order”, where real-sector trade would replace financial control over the world economy and where strength is returned to multilateral institutions such as the UN and sovereign states, just as it was supposed to have been after World War II.

This collides with the unilaterally modified vision that the US is currently trying to impose, so it’s misleadingly being described by many as being “against” the US, although as explained, this isn’t the intent at all since it’s more of a ‘return to the basics’.

Dr. Pang added more contextual clarity by describing OBOR’s economic genesis as being the natural progression from interdependency to globalization and now to connectivity, which he forecasts will ultimately lead to next generational global economic governance through the creation of a worldwide free trade road map.

China would ideally like to do this in partnership with all of the world’s leading economies, including the US, but Washington is against Beijing (and not the reverse) and refuses to partake in this process, in fact even going as far as to stir up geopolitical turmoil in order to impede OBOR’s mainland and maritime manifestations.

Dr. Pang doesn’t think that the US will succeed in this, however, and even suggested that while the rest of the world has changed China over the past 40 years, now might be the time that China changes the world.

The Great Project Of Afro-Eurasian Integration

Dr. Pang’s prescient statement deserves to be examined in full so that one can finally understand the critical role played by Lianyungang in the entire framework.

© Sputnik / Valeriy Melnikov
Melting Ice to Make Northern Sea Route Europe’s Shortcut to Asia
Geographically speaking, OBOR aims to directly link China to the entirety of Afro-Eurasia (hence the focus on outbound investment) using a complex network of terrestrial and oceanic logistics routes. Both methods of transport directly overlap in Europe, Russia, the Mideast, South Asia, and ASEAN, with the only notable exceptions being China’s maritime dependency on trade with Africa and its mainland one with Central Asia.

On the surface, OBOR seems to be all about economics, but Dr. Zhao Quansheng, chair of the Asian Studies Research Council at The American University, said that there are two other equally important components which serve similar integrational purposes. At the event in Lianyungang, he said that these are security/diplomacy and culture.

Addressing the first, he said that China will deepen its military and diplomatic ties with all OBOR partners, and that it is also serious about safeguarding its citizens abroad, pointing to the evacuation of its nationals from Libya and Yemen as being indicative of this new policy.

As for cultural integration, he highlights the mushrooming growth of Confucius Institutes and also draws attention to the efforts of Chinese companies to educate their expatriate workers about the local languages and traditions in which they work.

Expanding on the topic of China’s respect for its foreign partners, Ms. Zhang Mingxi, the Director of the Sihanoukville Special Economic Zone in Cambodia, spoke in-depth about the importance of Chinese enterprises’ social responsibility.

For example, she stressed the need to engage in charity work and to provide local workers with respectable housing, the opportunity to commemorate religious celebrations, and foreign language lessons and other training opportunities.

Mr. Che Jie, the Vice President of the Jiangsu Association of Lawyers, underscored the importance of Chinese companies hiring skilled and qualified professionals who understand local and international laws and regulations. He said that China learned relevant knowledge about these in regards to the EU and US, but that now it’s high time to do so for Central Asia, Africa, and ASEAN.

Altogether, from the economic, security/diplomatic, cultural, social, and legal perspectives, OBOR is truly all about China’s peaceful full-spectrum integration with its partners, demonstrating the historic grandiosity of this civilization-connecting project.

Economic integration is still the underlying catalyst of the OBOR project, however, and the key variable that will bridge together its mainland and maritime portions is the Port of Lianyungang.

Jiangsu Province, where Lianyungang is located, is situated between Beijing and Shanghai, and it’s probably the Chinese success story most people have never heard of.

It’s 78 million people help contribute to around 10% of China’s overall GDP, making it the country’s second-most economically productive administrative unit behind Guangdong (famous for its Shenzhen port opposite Hong Kong), mostly due to the ‘Shanghai sprawl’ that has helped enrich the province.

The value differentiator separating Lianyungang from other port cities such as Shanghai and Hong Kong is that it’s largely underdeveloped, meaning that its full potential hasn’t even begun to be approached, unlike the other two which are pushing their capacity.

The ‘late blooming’ of Lianyungang is a blessing of the highest economic magnitude, since it means that the area has more than enough space to accommodate for the surge of infrastructural facilities (such as warehouses and logistics bases) that will accompany OBOR’s global institutionalization. Recalling how China’s growing trade with Africa is solely dependent on maritime means, one could realistically forecast that its future base of operations could likely be Lianyungang.

© AP Photo / EyePress, FILE
China to Rearrange World Financial System – German Media
The same could even be said when it comes to Central Asian trade, which is also predicted to grow in the near future. Lianyungang is actually the eastern terminus of the New Eurasian Land Bridge, which in 1992 saw the first train travel from that location to Saint Petersburg. As President Xi bequeathed free storage space in the port to all SCO members in 2013, the landlocked Central Asian states finally have an outlet to the sea, and most importantly, to the growing Pacific economies.

Seen from the perspective, Lianyungang literally connects the two logistical trade exceptions of Central Asia (land-based dependency) and Africa (sea-based dependency), making it invaluable to OBOR and the mission of Afro-Eurasian integration. Since it’s also anticipated to play a bimodal (land and sea) role in linking to the other regions of the extended supercontinent, and alongside its near limitless physical infrastructure development potential, Lianyungang is easily predicted to become the center of geo-economic gravity that holds OBOR together, and likewise, one of the world’s most critical economic fulcrums in the coming decades.