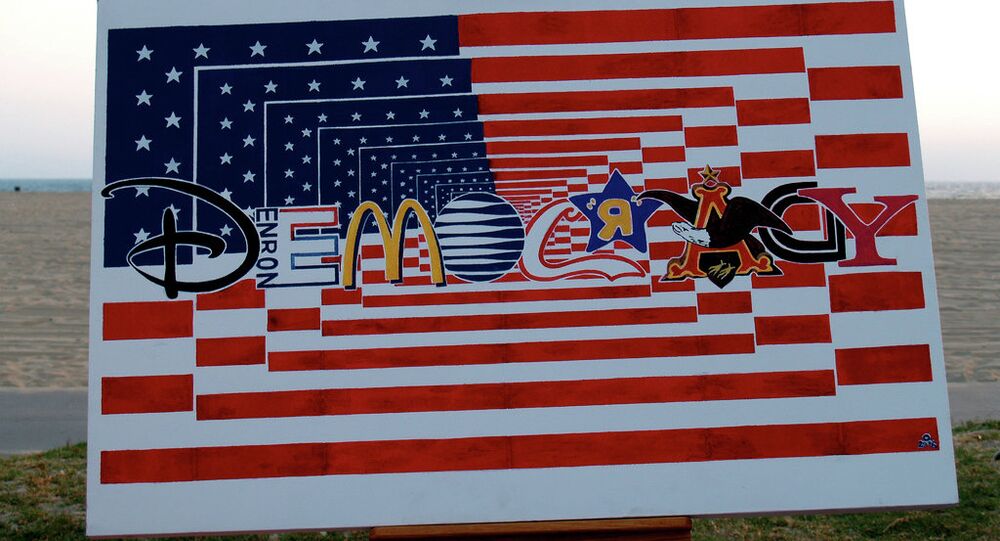 The British Labour Party no longer represents the working class. Under UK prime minister Tony Blair, the Labour Party became a vassal of the One Percent. The result has been a rebellion in the ranks and the rise of Jeremy Corbyn, a principled Labourite intent on representing the people, a no-no in Western “democracies.”

© AP Photo / Alastair Grant
Blairite Labour Plotting Coup to Axe Corbyn
Corbyn is too real for the Labour Party Blairites, who hope to be rewarded with similar nest eggs as Blair for representing the capitalist One Percent.  So what is the corrupted Labour Party doing to prevent Corbyn's election?

The answer is that it is denying the vote to Corbyn supporters. You can read the story here.

Washington rejected the government that the Egyptian people elected, because it appeared that the democratically elected government would have a foreign policy that was at least partially independent of Washington's. Remember, according to the neocons who, together with Israel, control US foreign policy, countries with independent foreign policies, such as Iran, Russia, and China, are America's "greatest threats."

The Egyptian military thugs, following Washington's orders, have more or less eliminated all of the leadership of the political party that was democratically elected. The party was called the Muslim Brotherhood.  In the presstitute Western media, the political party was described more or less as al Qaeda, and how are the ignorant, brainwashed, and propagandized Americans to know any difference?  Certainly neither "their" government nor the presstitute media will ever tell them.

With the military dictatorship's edict, independent news reporting no longer exists in Egypt.

Washington is pleased and rewards the dictatorship with bags full of money paid by the hapless and helpless American taxpayers.

© AFP 2021 / ERIC PIERMONT
Long Live the King: French Minister Misses Monarchy, Slams Democracy
Americans should keep in mind that most of the dollars that they pay in income tax are spent either spying upon themselves and the world or killing people in many countries.  Without resources taken from American taxpayers millions of women, children, and village elders would still be alive in Afghanistan, Iraq, Libya, Syria, Somalia, Yemen, Pakistan, Ukraine, South Ossetia, and other countries.  America is the greatest exporter of violence the world has ever known.  So wear your patriotism on your sleeve and be proud.  You are a depraved citizen of the world's worst killer nation. Compared to the USA, Rome was a piker.

France herself seems to be collapsing as a democracy and no longer respects her own laws.  According to this report from Kumaran Ira on World Socialist Web Site:

"In the name of the "war on terror," the French state is dramatically accelerating its use of clandestine operations to extra-judicially murder targeted individuals. French President François Hollande reportedly possesses a "kill list" of potential targets and constantly reviews the assassination program with high-ranking military and intelligence officers.

"This program of state murder, violating basic constitutional rights in a country where the death penalty is illegal, underscores the profound decay of French bourgeois democracy. Amid escalating imperialist wars in France's former colonial empire and deepening political crisis at home, the state is moving towards levels of criminality associated with the war against Algerian independence and the Vichy regime of Occupied France."

Where do you suppose the socialist president of France got his idea of an illegal and unconstitutional "kill list"?  If you answer from "America's First Black President," you are correct.

© AFP 2021 / DOMINIQUE FAGET
Assange: France May Sue US Over NSA Espionage Scandal
The French people should be outraged that "their" president is nothing more than a murderer and an agent of Washington.  But they aren't. False flag operations have made them fearful. The French, like other Western peoples, have ceased to think.

Every western democracy is gone with the wind.  Washed up, Finished.  Every value that defined Western civilization and made it great has been flushed by power and greed and arrogance.

I certainly do not believe that Western civilization was ever pure as snow and devoid of sins and crimes against humanity.  But it is a fact that in Western civilization, despite the numerous injustices, reforms were possible that improved life for the lower classes.  Reforms were possible that restricted the rapaciousness of the rich and powerful.  In the US reforms made the impossible come true: ladders of upward mobility made it possible for members of the lowest economic class to become multimillionaires. And this actually happened.

The governments in Washington committed many crimes, but on occasion Washington prevented crimes.  Remember President Eisenhower's ultimatum to Washington's British, French, and Israeli allies to remove themselves from the Suez Canal in Egypt or else.

© AP Photo / Virginia Mayo
Rasmussen Secretly Promised US Danish Support for Iraq War in 2002
Today Washington pushes its allies to commit crimes against humanity. That is what NATO is for.

In my lifetime Americans have always had a good opinion of themselves.  But in the 21st century this good opinion has hyper-jumped into hubris and arrogance. If you haven't been around very long in terms of a human life, you don't see this. But older people do.

Americans shouldn't expect any other outcome. The price to be paid for insouciance, self-satisfaction, and complicity is high.