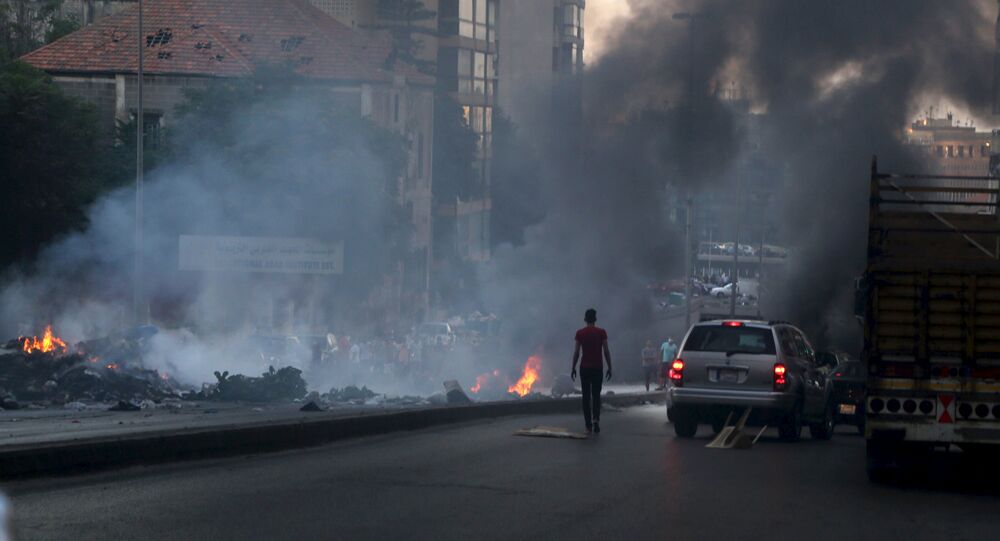 Lebanon’s Future is on the Line, and It Directly Affects Syria

Protests about the lack of proper city sanitation services have quickly escalated into full-blown calls for regime change.

Lebanese protesters demonstrated in Beirut this weekend as part of the "You Stink" movement, which was organized by citizens fed up with the garbage that had been piling up in their streets for weeks.

What began as an expression of legitimate grievances, however, quickly spiraled into the world’s latest Color Revolution attempt.

Some radical youth started throwing rocks and petrol bombs at police officers (uncannily reminiscent of the earlier hijacking of the peaceful-intentioned "Electric Yerevan" protests), which resulted in a forceful counter-response that was then immediately used to 'justify' the movement’s transformation into one of open regime change ends.

© REUTERS / Mohamed Azakir
Lebanese Police Use Water Cannons to Disperse Beirut Protesters (VIDEO)
The thing is, however, Lebanon doesn’t really have a functioning government to begin with, having been without a President for over a year. If the Prime Minister steps down as he threatened to do, then it would create an unprecedented constitutional crisis that might bring the formerly civil war-torn and multi-confessional state back to the brink of domestic conflict.

Any significant destabilization in Lebanon is bound to have a serious impact on Syria, which would be put in a difficult position by the potential cutoff of the strategic Beirut-to-Damascus highway and the possible redeployment of valuable Hezbollah fighters back to their homeland.

A Little About Lebanon

The tiny Middle Eastern state of about four and a half million people is marked by a demographic and political complexity that could hinder a speedy resolution to the current crisis. It’s necessary to be aware of some of its specifics in order to better understand the origins of the current stalemate and where it might rapidly be headed.

Unilaterally sliced out of Syria during the early years of the French mandate, the territory of Lebanon hails what is generally recognized as the most diverse population in the Mideast. Eighteen religious groups are recognized in the country’s constitution, including Alawites, Druze, Maronite Catholics, Sunnis, and Shiites.

© Flickr / Sohail Nakhooda
'Middle Eastern Union': West Redrawing Map of Middle East at Will
This eclecticism of religious communities is presided over by something referred to as the National Pact, an unwritten understanding that the President will always be Maronite, the Prime Minister will be Sunni, and the Speaker of Parliament will be Shiite, among other stipulations (and with a few historical exceptions).

Complementary to this concept is the country’s unique political system called confessionalism, whereby Christians and Muslims share equal seats in the unicameral parliament, but each group’s respective composition is determined proportionally by sect. Originally meant to be a temporary solution when it was first enacted in the 1920s, it was later refined by the 1989 Taif Agreement that ended the lengthy civil war and has remained in place to this day.

Crawling To A Crisis

The current crisis in Lebanon was long in the making, and it’s the result of many embedded problems that spilled over with the garbage protests. The economy has always been fragile, in that it’s highly dependent on tourism and banking – hardly the prerequisites for a stable system.

The overwhelming influx of over 1 million Syrian refugees over the past couple of years (on top of the nearly half a million Palestinian ones already present in the country) contributed to the country’s economic malaise, with the International Labor Organization quoting a 34% unemployment rate for youth between the ages of 15-24. It’s thus of no surprise then that there were plenty of disaffected young people eager and available to protest when the "You Stink" opportunity finally arose.

Lebanon’s economic troubles have been exacerbated by its enormously high debt-to-GDP ratio that has the dubious honor of being one of the world’s worst at 143%. It’s of such magnitude that Prime Minister Tammam Salam just announced that the government might not be able to pay salaries next month.

This economic dysfunction persists despite the discovery of large amounts of offshore oil and gas that have yet to be extracted. Part of the reason for this is that the country is in the midst of a political impasse stemming from parliament’s inability to agree upon a new president after the former one finished his term in May 2014.

© REUTERS / Jamal Saidi
Lebanese PM Salam Vows Justice After Violent Protests in Beirut
Since the president appoints the prime minister, if Salam resigns like he threatened to do if Thursday’s upcoming Cabinet meeting yields no results, then the country would enter completely uncharted territory that might prompt more pronounced unrest and guarantee a period of heightened uncertainty.

The arrangement of political forces is thus that two men have the possibility to be president – Michel Aoun and Samir Geagea. Each represents one of the two main trans-religious political coalitions, the 8 March Alliance and the 14 March Alliance, respectively, and both want parliament to end its impasse as soon as possible.

Their similarities end there, however, since Aoun is in an alliance with multipolar-oriented Hezbollah, while Geagea is closely tied to former Prime Minister and dual Lebanese-Saudi billionaire powerbroker Saad Hariri.

Wikileaks’ latest releases from the Saudi Foreign Ministry prove that Hariri still has intimate contacts with the Saudi royal family and intelligence services, and that Geagea once begged the kingdom to bankroll his party’s finances. Therefore, although the presidency itself is largely ceremonial, it’s the diametrically competing visions of these two parties and the potential for street clashes between their supporters during the Color Revolution tumult that creates serious concern about Lebanon’s future, and consequently, could be expected to have negative repercussions for Syria.

The regional backdrop in which all of this occurs is that the US and its allies are in a ‘race to the finish’ to ‘win’ their various Mideast wars before the tens of billions of dollars of frozen Iranian funds are returned to Tehran, which would then partially disseminate it to its regional allies Hezbollah and Syria.

Additionally, Russia has made remarkable diplomatic progress in trying to reconcile all sides in Syria and assemble a coordinated anti-ISIL coalition, raising the US’ fears that its window of ‘opportunity’ for accomplishing regime change there may unexpectedly be drawing to a close.

It’s thus under these conditions that the organic protests in Beirut were almost immediately hijacked by radical Color Revolutionaries in order to create chaos along Syria’s western border.

© AFP 2021 / JOSEPH EID
Russia Succeeds in Middle East Policy – Lebanon Presidential Candidate
The intent behind the calculated state collapse being attempted at the moment in Lebanon is to disrupt the Beirut-to-Damascus highway that serves as one of the two main lifelines to the Syrian capital, the other being the Damascus-to-Latakia highway. Shutting down the Lebanese route would make Syria wholly dependent on the Latakian one that’s vulnerable to an "Army of Conquest" offensive, which if successful, would cripple the country by de-facto blockading the capital.

At the same time, in the event that Beirut reaches its breaking point, some Hezbollah units currently deployed to Syria would be compelled to return back to the home front to assist in the inevitable power struggle there. The withdrawal of part (or all) of this valuable fighting contingent would make the military situation much more difficult for the Syrian Arab Army, both in defending the Damascus-to-Latakia corridor and in securing the Lebanese border from becoming a ‘second Turkey’ of terrorist infiltration.

Conclusively, it’s for these strategic reasons why it strongly appears that externally directed forces were ordered to exploit Lebanon’s existing tensions at this specific time. They engineered a Color Revolution attempt by using the "You Stink" protests as a semi-plausible cover, and this was timed to coincide with the ‘race to the finish’ being played out all across the Mideast.

Lebanon can still pull away from the brink, provided that Thursday’s upcoming Cabinet meeting resolves the presidential crisis and placates the country’s main political parties, but it will have to tread very carefully in containing sectarian temptations and avoiding the trap of escalatory Color Revolution provocations.