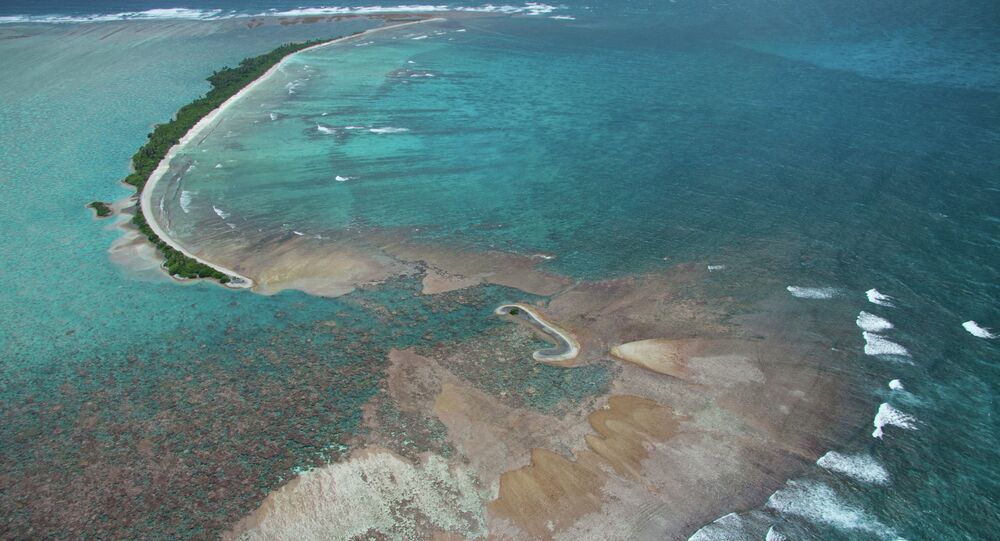 Remember Those Tiny Islands The US Unilaterally Seized Over A Century Ago?

America today is essentially accusing China of doing the exact same thing it did in the late 1800s to early 1900s under the Guano Island Act (GIA), which itself founded the legacy of the US' control over most of the Western Pacific even to this day.

© AP Photo / Bullit Marquez
Beijing Slams US Militarization of Disputed Territories in South China Sea
The US has lately made a sport out of fussing about China's island claims in the South China Sea, alleging that they're unilateral claims which violate international law. Purposely forgetting about China's historical ties to these territories and the wealth of complex history surrounding the multilateral situation, the US instead holds the belief that the entire issue is really all about some kind of regional power grab by Beijing. The American position is astoundingly hypocritical because it's essentially accusing China of doing the exact same thing the US did in the late 1800s to early 1900s under the Guano Island Act (GIA), which itself founded the legacy of the US' control over most of the Western Pacific even to this day. When compared back-to-back, China is in nowhere near a position to use its South China Sea island claims as an opening to larger trans-oceanic control like the US eventually did with its GIA claims, but in order to fully understand why this is the case, one must learn more about how a unilateral American law from 1856 opened the door for pan-Pacific conquest nearly a century later.

The Guano Islands Act And Its Territorial Legacy

The US passed the GIA in 1856 and it's still in force to this day. During that time, guano (or bird droppings) was a prized fertilizer that was much in demand all across the world, and thus, it was viewed as a strategic resource much as how certain metals are seen today. According Cornell University's Law School, which has a digital copy of the Act:

"Whenever any citizen of the United States discovers a deposit of guano on any island, rock, or key, not within the lawful jurisdiction of any other government, and not occupied by the citizens of any other government, and takes peaceable possession thereof, and occupies the same, such island, rock, or key may, at the discretion of the President, be considered as appertaining to the United States."

This unilateral decree was exploited to eventually provide the United States government with control over a handful of islands, most of which lay in the Western Pacific. Of these, excluding the two that are currently administered by American Samoa and Hawaii, they form the US Minor Outlying Islands, a legally peculiar category of American-controlled territory (which includes Wake Island, a non-Guano-gained territory). Some of the names are familiar to Americans, such as Johnston Atoll, known for its nuclear testing, and Midway, the World War II battle of which would turn the tide in the Pacific theater against Imperial Japan. Nowadays, all of the US Minor Outlying Islands, with the exception of Midway, are part of the Pacific Remote Islands Marine National Monument, a gigantic nature preserve protected by the American government.

The Trust Territory Of The Pacific Islands

YouTube/NavyRecognition
Chinese to Build Giant Floating Fortresses
The real legacy of the GIA lays not in establishing a wildlife preserve, but in forming the geographic precedent to the Trust Territory Of The Pacific Islands that was bequeathed to the US by the United Nations after World War II. This territory covers the modern-day countries of Micronesia, the Marshall Islands, and Palau, as well as the Northern Mariana Islands that are currently an American commonwealth with the same status as Puerto Rico.

The whole reason they were given to the US at the time was because the country liberated them during World War II, using its Guano Act-acquired base in Midway (which was heroically defended during the legendary 1942 battle) to ‘leap frog' across the Pacific all the way up to the Japanese Home Islands. Tokyo, for its part, had earlier controlled this vast and strategic territory after World War I as a result of the South Pacific Mandate (called Nanyo by the Japanese) given to it by the League of Nations, which simply handed Japan a large chunk of the former colony of German New Guinea. Prior to German control, this territory was occupied by Spain.

At the time that they were controlled by Imperial Japan, these islands provided strategic depth and served as a springboard for the Empire's other conquests further afield. When they passed hands to the US, their importance remained the same, in that Washington could utilize their position for strategic depth in the Pacific and as a pivotal point from which to project power deeper into Asia's other insular areas. Even though Japan was immediately occupied after the war (and remains so today in all but legal form) and the Philippines have been an anchor of American influence ever since their colonization in 1898, the US depended on the Trust Territory to maintain its influence by providing a solid ‘rear guard' of naval support in the event that something unexpected happened to its direct control over these aforementioned countries and it chose to reconquer them.

By the late 1970s and early 1980s, the Trust Territory began moving towards self-government, and three of its four members eventually received their independence in 1986 (the Marshall Islands and Micronesia) and 1994. But, however, this didn't mean that the US had surrendered its military position in these island chains, as nothing in fact has changed in this regard since the time of their formal occupation.

Proxy Control Of The Western Pacific

As part of the deal for their independence, these three countries entered into something called a "Compact Of Free Association" (COFA) with the US. It's basically a deal whereby the US gives them money and access to social services in exchange for having full control over their "defense" (i.e. continuing the same military occupation as before). Through COFA, the US continues to retain control over this large part of the Pacific (nearly the size of the mainland United States) via barely concealed proxy, which is becoming all the more important in recent years as the US recommits 60% of its naval forces to Asia as part of its ‘pivot' against China.

© Photo : Wikimedia/Jian Kang
China’s New Colossal Missile Launcher Revealed
From a geostrategic point of view, the COFA countries occupy what could be termed as the "third island chain" in the Western Pacific. As analyzed by the US Naval Institute, China formed a long-term plan in the 1980s to modernize its navy so that it could eventually defend its interests up to the first (Kuril-Japan-Ryukyu-Philippines-Indonesia) and second (Kuril-Japan-Bonin-Marianas-Palau-Indonesia) island chains. Simply think of it as the Chinese Navy being able to operate up to and past Japan and the Philippines. The third chain, not listed in the analysis but obviously inferred, would be the Marshall Islands and Micronesia, and although they don't go north to south like the other two (they're mostly east to west), they're still strategically important in terms of exercising naval hegemony over this wide swath of space.

With the US in COFA control over these last two countries, it has the ultimate fall back plan in case the grandiose ‘Pivot to Asia' falls flat on its face, perhaps if the Japanese finally come to their pacifistic senses and the Philippines fall apart. And, if one remembers the history that they just learned, this whole security architecture owes its thanks to Midway, which the US unilaterally seized over a century ago in search of bird droppings.