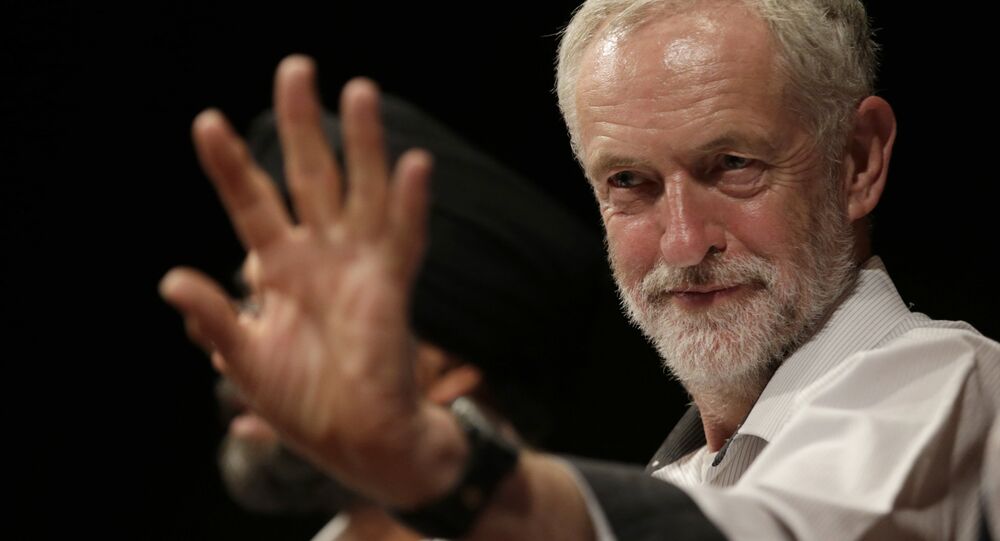 The British Labour Party under the sway of former Prime Minister Tony Blair is plotting to derail Jeremy Corbyn’s bid to win the forthcoming leadership contest.

Such is the fear of Corbyn reinventing the party as a genuine socialist alternative, that Blair and his clique of “party grandees” are aiming to overturn the ballot underway among the rank-and-file members.

Peter Mandelson, a top aide to Blair who is now a member of the unelected House of Lords, reportedly made an attempt to get the other three contenders to “stand down” from the leadership election, and thereby trigger the ballot to be declared void.

The rightwing Daily Telegraph reported this week that Mandelson and other Blairites are aghast at the prospect of Corbyn winning the party leadership. They have described the election a “disgrace” and want to have the vote “pulled”.

In the end, Mandelson failed on that occasion to trigger a “mass resignation” by Corbyn’s three opponents. The other candidates in the leadership contest – Andy Burnham, Yvette Cooper and Liz Kendall – are all considered loyalists to the dominant Blairite wing of the party, or so-called “New Labour”.

Mandelson, a key architect of the reformist New Labour project under Blair during the 1990s, was told by party officers that his scheme for derailing the ballot would not work, and that Corbyn would be left as the only standing contender, with his victory then certain.

© AP Photo / Mykhailo Markiv
Poroshenko Offers Tony Blair a Job
However, that aborted Blairite coup against Labour’s democratic procedure can be seen as a first shot across the bow. More dirty tricks can be anticipated over the coming three weeks when the party rank and file cast their votes. Already Tony Blair and other acolytes of the New Labour wing have joined in a British media campaign of mudslinging and character assassination against Corbyn.

What this shows, more than ever, is that the Blairite Labour leadership is thoroughly in bed with the British political establishment and their rightwing media, from the BBC to the gutter tabloid press. No genuine political alternative is permitted that might present a popular challenge to the prevailing orthodoxy of neoliberal capitalism, as espoused by the ruling Conservative Party, led by David Cameron, and the official parliamentary opposition in the Labour Party under the sway of Blairism. A socialist alternative?
Forget it, says the establishment.

Jeremy Corbyn (66) is a veteran Labour Party backbencher who has consistently championed socialist policies, both in national and international spheres. He is planning to overturn the neoliberal dogma of economic austerity and unbridled pandering to the wealthy elite, and to boost British society with a massive investment program for public services.

Corbyn is consistently anti-war over the past 30 years or so of his political life. He is against Britain’s servile following of US-led overseas militarism and has long been calling for nuclear disarmament.

The North London MP wants to realign Britain’s foreign policy to have normal friendly relations with Russia, and to end British support for the illegal Israeli occupation of Palestinian land.

He says he wants to make Britain a “fairer country” after nearly three decades of neoliberal capitalist disaster that has turned Britain into one of the most unequal countries among leading Western nations and a rogue imperialist warmongering power. Indeed, Corbyn is on record for stating that Blair should be prosecuted for war crimes owing to the US-British destruction of Iraq.

© REUTERS / Toby Melville
Tony Blair Warns Labour Party Faces 'Annihilation' if Corbyn Elected Leader
Corbyn’s policies are hardly radical. Many people see his agenda as simply reasonable and democratic. But such is the de facto dictatorship of official political thought in Britain that Corbyn’s views are anathema to the establishment.

Jeremy Corbyn, it seems, has news for the British establishment. There is an alternative and he is unabashedly pushing a socialist version.

And ordinary Labour Party members appear to be agree with him. Not just party members, the wider public too. In recent weeks since Corbyn announced his candidacy for the party leadership, hundreds of thousands have joined Labour just to get the chance to vote for him.

Polls taken among Labour members show that Corbyn is the runaway popular choice to take over the leadership from Ed Miliband – another Blairite clone – who declared his resignation after the disastrous defeat in the British general election earlier this year in May. The Conservatives won with only a third of the electorate – testimony again to Britain’s anti-democratic state.

The surge in new party members could provide the Blairite honchos with a pretext to scupper the election. The Guardian newspaper reports that Blairite MPs are claiming that the swelling ranks of new members are “impostors” and that the sheer burgeoning numbers make their votes for Corbyn invalid.

If the Blairite leadership clique do not find a technical excuse to axe the party election, they are sure to ramp up the media campaign of vilification against Corbyn.

The Guardian, for example, a New Labour-supporting outlet, has run a stream of opinion pieces by Blair and various pundits making shrill attacks on Corbyn. Blair has made the hysterical claim that a vote for Corbyn would lead to the annihilation of the party.

Meanwhile, the rabid rightwing press are trying, but so far failing, to dig up all sorts of dirt. The Daily Mail has accused Corbyn of having links to international terrorism and being a “Holocaust denier”. This week, he was forced to publicly explain his past support for Palestinian resistance group Hamas and the Lebanese militia Hezbollah.

The Murdoch-owned Sun has heaped slanderous caricature on Corbyn, calling him a “Marxist throwback” and “firebrand pensioner”.

Nevertheless, in all the media maelstrom, Corbyn has remained calm and focused on the issues. He says: “We’re the one putting forward ideas, so I don’t do personal, I don’t do reaction, I don’t do abuse… Can we please – and I say this to everyone – just talk about the issues that people are facing: the poverty levels, the inequality levels, the health problems, the way in which austerity is impacting on the lives of the most vulnerable in society? That is what’s most important.”

The irony is that the more Blair’s New Labour plot with the rest of the British establishment to bring Corbyn down the more ordinary citizens are rallying to his campaign.

© AP Photo
Ex British PM Blair Steps Into Election Campaign Amid Cries of Foul Play
Evidently, it is not the principled socialist politician who is being discredited and appearing anachronistic. It is the entire British establishment and their corporate-controlled rightwing media, including the nominally leftwing Guardian, who are seen as waging a vicious war against people’s democratic aspirations.

Maybe sometime in the past the British establishment could succeed in destroying an alternative voice, as they did with Labour’s Michael Foot and Tony Benn during the 1980s. But, today, the public no longer rely on the media mouthpieces of the establishment. They can make their own minds up with abundant alternative information sources.

The surging popular support for Corbyn is proof of that. The British people have had it with the rich getting richer and the vast majority getting poorer. They have had it with war, state-sponsored lawlessness and “professional” politician-puppets like Tony Blair and his New Labour ilk.

Corbyn is showing that socialism is a real alternative, no matter what the establishment says.