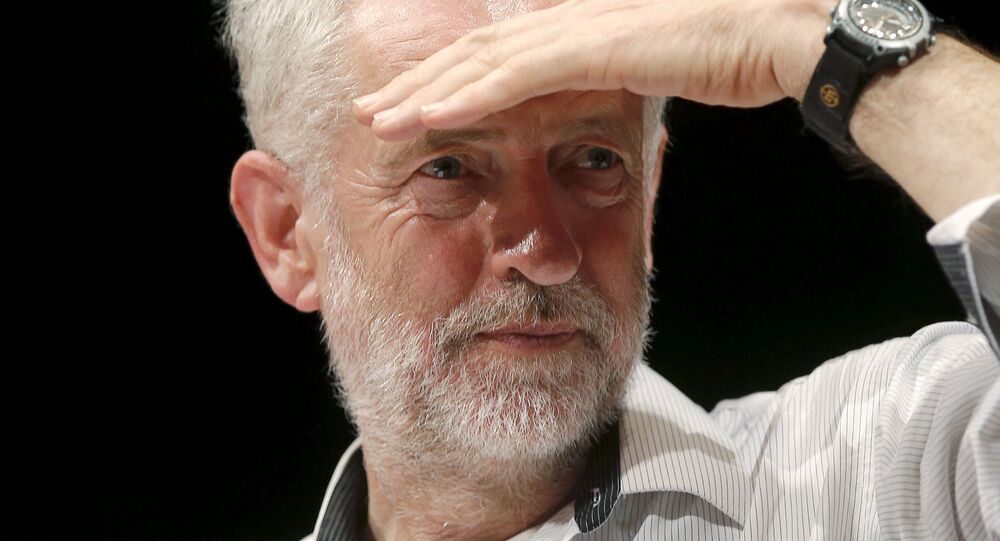 The rise of the veteran socialist Jeremy Corbyn to possible leadership of Britain’s opposition Labour Party has reduced the British establishment to a state of hysteria.

There has been incredulity, recriminations, thunderous editorials in the leading newspapers and denunciations of Corbyn from a variety of commentators.

© AFP 2020 / LESLEY MARTIN
Anti-NATO, Anti-War: Why the UK Establishment Fears Jeremy Corbyn
To the establishment's bafflement, none of this has worked.

The more he is attacked the more popular Corbyn becomes. Opinion polls show him to be the most popular of the four Labour Party leadership contenders — not just amongst Labour supporters but with the British electorate as a whole.

What explains this phenomenon?

Corbyn's rise is remarkable principally because of the British establishment's reaction to it.

Labour is supposed to be a leftwing party. It is at many levels strange that the British establishment is surprised that Labour supporters prefer a leftwing person for their leader. It would seem on the contrary a natural choice.

This points to the reason for Corbyn's rise and the hysteria it has provoked.

This is the stifling consensus that has British politics in its grip.

The two big British political parties — Conservatives and Labour — were once clearly differentiated.

The Conservatives supported business, drew their votes from the middle class, upheld free markets, were socially conservative and loyal to the US.

Labour drew its support from trade unions and workers, believed in interventionist economic policies, was socially liberal and was more critical of the US.

Since the 1990s this differentiation has disappeared.

Both parties are now loyal to the US, both uphold free markets and both are socially liberal.

Meanwhile, in order to differentiate themselves, they exaggerate minor differences and constantly lie about themselves and each other.

Meanwhile, as politics has lost its original purpose, it has come increasingly to be seen as a means of self-enrichment, leading to a growth of corruption previously unknown in Britain.

This consensus is enforced by an aggressive news media, which savages anyone who challenges it.

This consensus suits a British establishment that is its beneficiary. However it does not reflect the diversity of views in Britain.

Conservatives,Labour and the British news media are monolithically hostile to Russia. Anyone who reads the comments thread of any in the unending stream of anti-Russian articles in the British media will however see that many Britons disagree. Their opinions however find no voice in the political system.

© REUTERS / Toby Melville
Do Not Vote for Jeremy Corbyn! Ten Perfectly 'Reasonable' Reasons
The result is the evisceration in membership of the two big parties, the collapse in voting turnout and the rise of protest parties such as UKIP and the SNP.

It is not surprising therefore that disillusioned and angry Labour Party supporters look to Jeremy Corbyn — a veteran socialist first elected to parliament in 1983 — who belongs to the world which existed before the consensus, which he has always resisted.

It is also unsurprising that a complacent and increasingly corrupt establishment, entrenched by the consensus, is horrified it might now be challenged by someone who comes from outside it.

As for the British electorate, Corbyn's popularity — as of the SNP and UKIP — shows what is obvious to anyone who follows British politics closely — that it has become tired of being endlessly bullied and lied to by a British establishment that has lost its respect.

Miliband Shies Away From Campaigning Against Front-Runner Corbyn