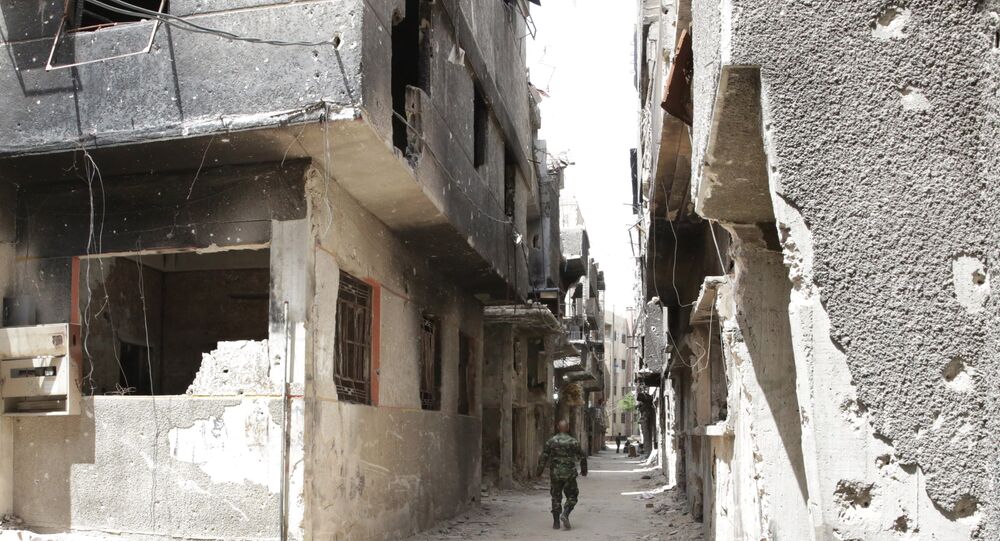 The past couple of weeks have seen Russia intensify its efforts to resolve the War on Syria and coordinate an inclusive anti-ISIL coalition.

The War on Syria experienced a noticeable escalation ever since the Iran nuclear agreement was signed, with Turkey committing to “fight ISIL” in the country and the US gaining access rights to use the nearby Incirlik air base for its bombing missions in Syria.

© AFP 2021 / HO/SANA
Lavrov: Russia Opposes Calls for Assad's Resignation
What’s really going on is that the American-Turkish Tandem is racing against the clock to accomplish The Brookings Institute’s plan for splitting Syria as soon as possible, knowing that Iran will likely send some of the billions of dollars of frozen funds that it’s set to receive around January to its embattled ally, and in turn irreversibly augment Damascus’ defensive capabilities against external aggression from then on out.

In a valiant effort to stave off a full-scale Turkish-American regime change invasion, Russia has initiated a flurry of diplomatic activity, including the series of Moscow meetings held over the past week that received barely any Western mainstream attention. Given how Russia saved Syria almost exactly two years ago, it’s fitting to look at its latest set of initiatives to see how it plans to do so again.

Before examining the four interconnected meetings that just took place in Moscow, it’s necessary to briefly outline Russia’s grand strategy for resolving the War on Syria so that the reader can properly grasp the context and motivation for everything that transpired. Here’s the three-step plan that Russian diplomacy is working to achieve:

ISIL is without a doubt an existential threat to Syria, and it’s in the interests of every patriotic citizen to unite with their brethren in combating this scourge.

Up until now, however, that’s been hampered by self-interested anti-government groups that continue to attack the Syrian Arab Army (SAA), thus provoking the authorities to respond in self-defense and ultimately keeping them from adequately targeting the terrorists instead.

So long as these militantly seditious forces see regime change as a more important goal than anti-terrorist efforts, then the country will be mired in divisions that prevent an effective and united anti-ISIL front from forming.

Therefore, as first attempted during the Moscow I and II talks earlier this year, Russia wants to help bring the non-terrorist anti-government opposition (NTAGO) to a truce with the SAA so that both bodies can work together in eliminating ISIL and then dealing with their differences later

In the event that the SAA, NTAGO, and other armed forces in Syria (e.g. the Kurds) can work together in fighting ISIL, the next logical step would be to expand this format to the international level and include the forces combating it in Iraq.

The terrorists’ transnational nature means that it’s necessary to counter them in both theaters at once, as this strategy prevents the group from recouping its losses in Syria with gains in Iraq, for example, and it also puts added pressure on them by compelling its commanders to divide their forces instead of concentrating them on swarming one city at a time.

As such, because of the international scale involved and the fact that the US-led coalition is already active in both countries (to differing degrees), it’s suggested that all entities coordinate their existing anti-terrorist measures and that no new coalition (let alone one with an official command) is thus required.

Although not explicitly stated, it’s very probable that Russia is preparing for a third round of Geneva diplomacy.

The first two conferences failed to resolve the crisis, with the regime change elements refusing to back down from their goal, but the initiatives did yield the Geneva Communique which is cited by all sides as the document that must be abided by in any forthcoming reconciliation.

Now that the anti-government militants are facing extermination by ISIL and could be ready to urgently cooperate with the SAA in countering it (see Step 1), they might finally be coming to their senses in realizing the futility of further dividing Syria in the face of such a foe.

It’s at this juncture that Geneva III would be relevant, but if it happens at all, it’s most likely to occur after ISIL is defeated, not before it, since neither the legitimate authorities nor the NTAGO can afford a drawn-out process (which if the previous conferences are any indication, is exactly what the third one would be like, too) that prevents their anti-terrorist cooperation as soon as possible.

Having explained Russia’s end game, let’s look at how each of the four meetings in Moscow this past week were organized specifically to advance one of these objectives:

© AFP 2021 / YURI KADOBNOV
Saudi Arabia Backs Political Settlement in Syria Without Assad
The visit of Saudi Foreign Minister Al-Jubeir was mostly about Moscow’s efforts to have Riyadh agree to coordinate its anti-ISIL activity with the SAA, albeit with no formal success. But then again, Saudi Arabia is such a minor player in the coalition’s bombing campaign as it is that such an agreement would be more symbolic than substantial.

In an unofficial capacity, however, it stands to reason that Lavrov also spoke to his counterpart about a much more impactful pivot proposal, which would be the Saudis cutting off their support for anti-government militants in Syria and/or encouraging them to work together with the SAA against ISIL. It’s not known how successful this latter attempt may have been, but Al-Jubeir’s statement right afterwards that his country is interested in purchasing Russian Iskandar ballistic missiles suggests that a grand deal (missiles-for-militants) might be in the works.

The SNC is an externally based player in the War on Syria at the moment, but nonetheless, they’re recognized as one of the most well-known NTAGO groups. Their visit to Moscow saw Russia suggesting that they get their Syrian-based militants to form a united “opposition” entity with their counterparts, join the Moscow Inter-Syrian Dialogue process (Moscow III?), and focus on curbing terrorism.

Basically, it was Russia’s strongest move yet to promote the first step of its grand strategic blueprint for Syria, and unlike the meeting with Al-Jubeir, this one wasn’t met with any explicit refusals.

PYD leader Saleh Muslim’s trip to the Russian capital wasn’t his first (he was there in April for Moscow II), but this time the topic of discussions was different.

This is significant because if Moscow can get the Syrian Kurds on board with its idea, then it would create a stepping stone for getting the Iraqi-based Kurdish Regional Government to do the same later on (despite their differences with the PYD), which could bring about the transnationalization of the coalition.

The Syrians must themselves decide their fate and their future, and foreign states should only make this easier”, and Lavrov seconded this by firmly declaring that “If some of our partners believe that it is necessary to agree in advance that at the end of the transition period, the president will leave his post, for Russia, this position is not acceptable.”

Although not officially commented upon, it can also be inferred that both Foreign Ministers talked about the latest Iranian-authored peace plan for Syria, which might ultimately set the stage for the fabled Geneva III meeting and finally result in the national reconciliation that’s eluded the war-torn country for so long already.