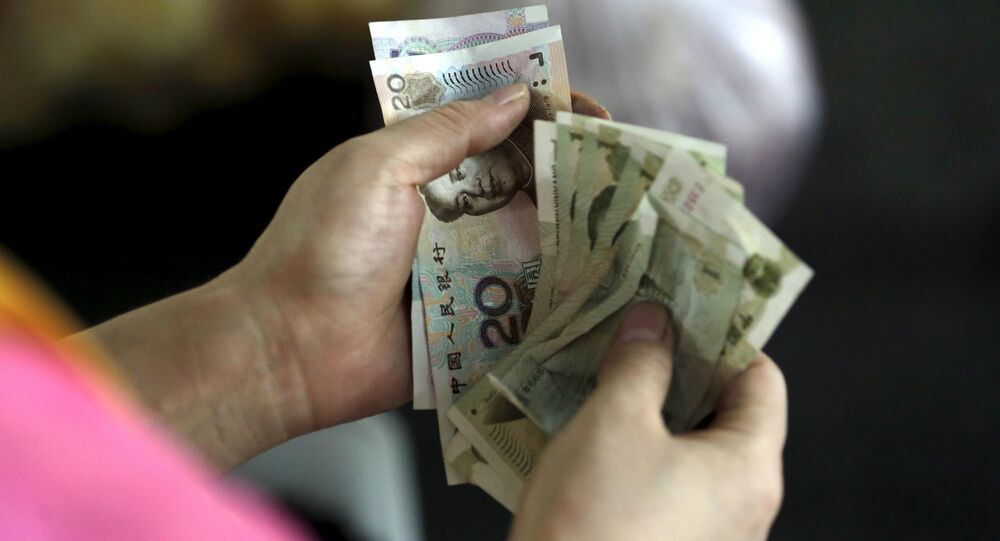 What the Latest Currency 'War' is All About

When the US embarks on perennial quantitative easing, that's OK. When the EU does QE as well, that's OK. But when the Bank of China decides it's in the best interest of the nation to let the yuan go down a bit instead of infinitely up, that's Armageddon.

It took the Bank of China to devaluate the yuan on two consecutive days — moving within the 2 percent band that it's allowed to — for the proverbial global financial banshees to go completely bonkers.

Forget the hysteria. The heart of the matter is that Beijing has stepped on the gas in a quite complex long game; to liberalize the yuan exchange rate; allow it to free float against the US dollar; and establish the yuan as a global reserve currency.

So this is essentially exchange rate policy liberalization — not a currency "war", as the frenetic spin goes from Washington/Wall Street to Tokyo via London and Brussels.

© Sputnik / Alexandr Demyanchuk
China Devalues Its Tightly-Controlled Currency to Make it 'Market-Friendly'
Former Morgan Stanley non-executive chairman in Asia, Stephen Roach, delivers the predictable Goddess of the Market orthodoxy, warning about the "distinct possibility of a new and increasingly destabilizing skirmish in the ever-widening global currency war. The race to the bottom just became a good deal more treacherous."

A note written by a group of HSBC analysts is more realistic; "The depreciation pressure on Asian currencies from China's action should fade as the nation isn't aiming at engineering a much weaker yuan. Doing so would contradict the goal of promoting greater global use of the yuan."

The Bank of China itself, in a statement, stresses it will allow the markets to have more influence over the yuan exchange rate.

And crucially, it also stresses there is no economic basis for the devaluation, pointing to China's enormous current account surplus and humongous foreign exchange reserves.

© Sputnik / Alexander Yurev
China Allows Yuan to Fall 2% to Keep Exports Competitive Amid Economic Woes
As Beijing interprets it, keeping a strong link to the US dollar has interfered with China's being competitive with its top trading partners  — Japan and Europe.

So now it's time to rock the (wobbly) boat. Thus the "currency war" hysteria — because the practical result, in the medium term, will be a new boost to Chinese exports.

When the US embarks on perennial quantitative easing (QE), that's OK. When the EU does QE as well, that's OK. But when the Bank of China decides it's in the best interest of the nation to let the yuan go down a bit instead of infinitely up, that's Armageddon.

Just do the math

Having the yuan track close to the US dollar served China very well — until now. QEs in the EU and Japan led to a weaker euro and a weaker yen — while the yuan remained stable against the US dollar.

Translation; since over a year ago, in June 2014, the yuan's real exchange rate has been the world's strongest, increasing by 13.5 percent. That was more than that of the US dollar (12.8 percent).

It was not hard for Beijing to do the math; the strong link with the US dollar was eroding China's competitiveness with top trading partners Japan and Europe.

Yet a simple 2 per cent devaluation may not be enough to boost China's exports. After all the yuan appreciated more than 10 percent over the past year relative to China's top trading partners.

Thus the inside word in Beijing about "powerful voices inside the government" pushing for the Bank of China towards an overall 10 per cent devaluation of the yuan. Now that would certainly boost exports.

© REUTERS / Jason Lee
Yuan Devaluation Could Boost China's GDP - Brazil's BRICS Bank Vice Pres.
So the devaluation this week — which has generated so much hysteria — seems to point towards a few more devaluations further on down the road.

This being China, where planning ahead is a matter of years, not a day-to-day frenzy as in Goddess of the Market territory, the whole game is about turning the yuan into an official global reserve currency.

A team of IMF experts has recently been to Shanghai, talking to officials at the Chinese central bank and China Foreign Exchange Trading System, which oversees currency trading in China, to establish whether the yuan can be part of the special drawing rights (SDR) basket.

Not surprisingly, the IMF itself praised the recent devaluation; "China can, and should, aim to achieve an effectively floating exchange rate system within two to three years."

And the IMF also admits that, "a more market-determined exchange rate would facilitate SDR operations in case the Renminbi were included in the currency basket going forward."

So this is what it's all about; Chinese adjustments with an eye to get the yuan ready to qualify for reserve currency status. The IMF's final decision is expected to be made by the end of 2015 or by the fall of 2016.

An internationalized yuan established as a global reserve currency implies a "market-determined" exchange rate policy. That's what the Bank of China is ultimately aiming at. The rest is a tempest in a (US dollar) teacup.