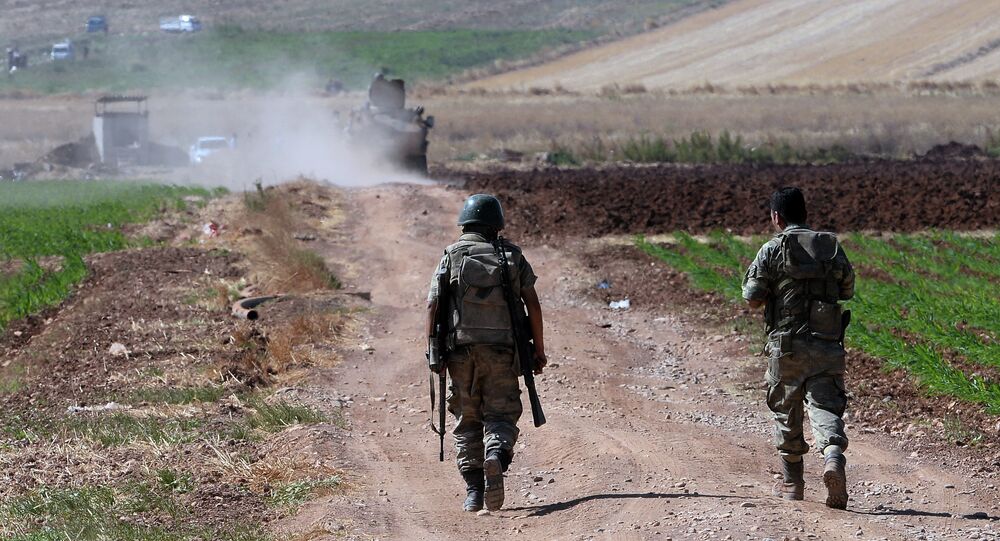 Turkey’s bombing campaigns against Syria and Iraq are motivated by a lot more than supposed ‘anti-terrorist’ considerations.

© AP Photo / Osman Orsal
Kobani, The Kurdish Question, and Turkey’s Conundrum
Turkey and the US surprised the world late last month when they announced that they would formally support one another in their respective ‘anti-terror' campaigns in the region. Ankara finally allowed Washington to use the air base in Incirlik to assist with its regional bombing missions, while the US pledged its support for Turkey as it purportedly battles ISIL in Syria and pounds the PKK in Iraq. Quite a few observers were caught unaware by these developments, especially when it had earlier seemed like the US had failed to coax Turkey into a conventional intervention in Syria during the highly publicized siege of Ayn al-Arab. Explaining this sudden turnaround requires peeling back the layers of political intrigue and analyzing the processes that have been evolving behind the scenes up until now.

The last Turkish general election dealt a disappointing defeat for Erdogan and his AKP party, which failed to acquire the parliamentary majority that they hoped would grant them the power to change the constitution. Part of the reason for this was two-fold — the Kurdish-affiliated People's Democratic Party (HDP), running for the first time, won a sizeable 13.1% of the vote; and the right-wing Nationalist Movement Party (MHP, the people who think Erdogan should be more aggressive) captured 16.3% of the total. Evidently, the voters who supported these two parties took electoral support away from the AKP and deprived it of its planned majority. In the current political predicament, Erdogan must now either form a coalition government with the MHP (which neither side said they would do) or schedule early elections, the latter of which is the more feasible of the two options.

In preparing for the coming vote, which could very well be a do-or-die moment for the AKP, Erdogan is taking no chances. In order to secure his party's chances of clinching the fabled majority, he appears ready to exploit the anti-Kurdish offensive (which has stoked pro-government nationalist sentiment and likely attracted MHP voters) in order to suppress the HDP. The Turkish President has already asked legislators to lift the party's parliamentary immunity from prosecution, intimating that some of its leaders might have links with the PKK, the Turkish- and Western-designated terrorist group that Ankara is once more fighting against. While he publicly resists the populist calls to outright ban the HDP, Erdogan recently proclaimed that "…executives of this party should pay. The Turkish state has the power to make so-called politicians and so-called intellectuals pay for the blood of its martyrs."

This bluster of nationalism may foreshadow the anti-Kurdish political repression that his critics fear, which would basically shut them out of the political process next election. If Erdogan can get all his ‘ducks in a row' by taking nationalist votes away from the MHP while simultaneously eliminating his HDP competitors, then he'd dramatically increase the chances that the AKP would win the snap vote and usher in the constitutional changes that would empower his presidency.

US Turns On The Kurds

© AP Photo / Vadim Ghirda
Kurdish Wrecking Ball and American Geostrategy in Mideast
Many people are scratching their heads wondering how the US went from supporting the Kurds in Iraq and Syria to backing Turkey's campaign against them in the former (and turning a blind eye to it in the latter), but the reality is that the US was manipulating them as geopolitical pawns from the get-go. On the one hand, it envisioned using them to create a ‘geopolitical Israel' in the heart of the Mideast, but on the other, it knew that such an effort would tempt Turkey to conventionally intervene and put an end to these plans (which could also derail its potential Eurasian pivot). Either way, it would be a win-win for Washington, hence why the policy was pursued to its maximum extent with the US providing weapons, equipment, mercenaries ("volunteers"), and training to the Kurds, knowing that this would embolden some of their more militant elements to inevitably turn their newly acquired skills and wares against Turkey. When it finally happened (and prodded by Turkish provocations), Ankara struck back in Iraq and used the cover of its ‘anti-ISIL' campaign to do so in Syria against the PKK-affiliated YPG Kurdish militia.
© AP Photo / Vadim Ghirda
Pentagon Authorizes Air Support for US-Backed Forces in Syria
The US is upset at the YPG for their loyalty to democratic principles and civilization-state sovereignty, as they have thus far refused to turn against the Syrian government and unite with their Iraqi brethren in forming ‘Greater Kurdistan'. This threw a wrench into the US' geopolitical cogs, which is why it's not at all opposed to Turkey's punishing attacks against them. Plus, since the YPG has proven itself to be an effective anti-ISIL actor, the more that its capabilities are degraded by the Turkish military, the more powerful ISIL can become, which circularly invites an even more pronounced American-Turkish intervention in ostensibly wiping the terrorist group out. All of this is just a smokescreen for the real objective, however, which has always been regime change in Syria. The fact that Turkey granted the US permission to finally use the strategic Incirlik air base for its anti-Syrian operations as well as Obama's authorization for the Pentagon to attack the Syrian Arab Army under certain circumstances confirms that this is undoubtedly the case, although it's uncertain exactly how far both sides will go in actualizing this grand objective.

The timing for all of this (Turkey's dual offensives, the Incirlik decision, and Obama's new anti-Syrian aggression) was specifically coordinated so as to be rolled out almost immediately after the Iranian nuclear agreement was concluded. The US didn't want to risk upsetting Iran and scaring it away from signing, ergo why such decisions were pushed back until after the ink was dry. Now that Iran has committed itself to the Joint Comprehensive Plan of Action, there's a little over a six month window until it can receive the billions of dollars of frozen funds that were withheld from it due to the UNSC sanctions. The impending financial windfall will allow Iran to more robustly assist Syria and its other regional allies in strengthening their defenses against unipolar aggression, which is why the US knows that it only has a set amount of time to act in fulfilling its regional designs. It's for this reason that the US is heating up its War on Syria at the same time that Saudi Arabia has intensified its War on Yemen.

© Sputnik / Alexei Danichev
The 5 Most Important Geopolitical Highlights of SPIEF-2015
But the US and Turkey's latest connivances might just be a last-ditch effort by them to follow the Brookings Institute's regime change policy recommendations (brilliantly deciphered by Tony Cartalucci) before Russian diplomacy shuts them out of the game. Ghassan Kadi translated and analyzed a groundbreaking media report that was omitted from all mainstream global coverage which says that Russia used its recent inroads with Saudi Arabia to broker a meeting between the Syrian Chief of Home Security and the Saudi Defense Minister. Obviously, the Saudis are wising up to the fact that their Wahhabist plans in Syria have backfired and that there are more pressing ‘security' considerations for them to attend to, such as their War on Yemen, which is why they're now probing for a way out of the fiasco that they themselves helped created. The clock is ticking, and the US and Turkey know that they need to act fast in Syria before a Russian-Saudi/Syrian-Saudi deal locks them out of the battlefield and Iran's forthcoming financial assistance helps Syria sweep out the rest of the regime change remnants.