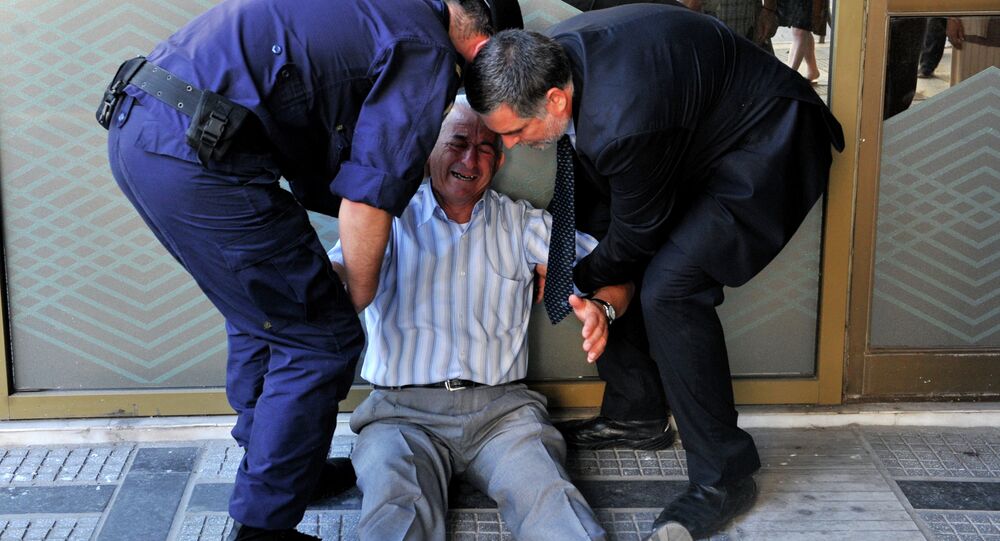 Whatever the outcome of the neck-and-neck Greek referendum on EU-imposed austerity, the real verdict is clear: capitalism is a bankrupt, redundant economic system that has become a scourge on humanity.

© AP Photo / Petros Giannakouris
Greferendum Results 'Give Tsipras Leverage' in Talks With EU
The Greek people are asked whether to vote No or Yes to financial so-called bailout terms from the European Union and International Monetary Fund (IMF). It’s a moot point whether people can freely make a choice when they are being asked the question under extreme duress of poverty and anxiety over basic needs like how to feed their families.

Moreover, in the minutiae of arguments over the putative pros and cons of membership of the euro monetary system or indeed the EU bloc itself, there is a danger of overlooking what is the most pertinent issue. At issue is the entire economic system we call capitalism.

Surely the sight of thousands of Greeks queuing every day outside banks this past week to desperately seek a paltry €60 is an indictment of the economic system that puts private profit above all human needs. And this is in a supposedly modern, advanced country – a member of the European Union no less.

The harrowing scenes of human misery on the streets of Greece should serve as a damning indictment. Among the jostling throngs were many elderly people, trying to steady themselves on walking sticks as the crowds surged at bank doors and ATMs.

One elderly man was photographed collapsing in despair on the pavement after failing to obtain a cash withdrawal for his wife and himself after queuing at four different banks. “It grieves me to see my country like this,” he said helplessly.

Another hapless pensioner rummaged in his pockets. “I think I have fifty cents in here…” Asked by a reporter how he will eat over the next days without any money, the old man simply shrugged: “I don’t know.”

Adding to the burden on Greece’s senior citizens is that they are often supporting their unemployed children and grandchildren. On an average pension of €700 per month – which is below the official EU poverty line – Greece’s elderly are left to support millions of unemployed family members. Since the Greek debt crisis emerged in 2010, the EU’s austerity policies have devastated the Greek economy and forced millions into unemployment. The jobless rate among its 11 million population is near 30 per cent, while for youth it is as high as 60 per cent.

© REUTERS / Yannis Behrakis
Greece May Face Default Worth Half Trillion Euros in Two Weeks
Greece’s austerity, imposed to pay off international creditors and banks, has “succeeded” in only driving up the country’s debt level to an unassailable €320 billion – or 175 per cent of national economic output (GDP). Even one of its creditors – the IMF – has acknowledged that Greece’s debt will never be repaid. The country is facing decades of poverty.

The catastrophe that is being witnessed in Greece is but the opening episode of a global scenario. What is worrying the EU leadership in Brussels is that the implosion of Greek society today is the prelude of a chain reaction ready to unleash across the rest of Europe. The fear is that an even bigger meltdown is to follow in Italy, Spain, Portugal and France, among other EU members, where national indebtedness is just as bad as Greece’s, if not worse.

All across the Western capitalist world, astronomical debt has been accumulated. The United States with an official debt level of $17 trillion – about 100 per cent of its GDP – is the king debtor. Cities like Detroit and Stockton, California, are already declared bankrupt with many more to follow suit. Last week, the US offshore state of Puerto Rico applied for bankruptcy status with an un-payable debt of $73 billion. An editorial in the New York Times lamented the condition of global debt as “an ailment without cure”, noting that Western countries have thrown $10 trillion through “quantitative easing” at their economies in recent years without any ameliorative effect.

How did we get into such a systematic mess? Capitalism.

Over the past two decades, capitalism has degenerated into a financial casino system, driven by the decline of profits in manufacturing and real production. It is no longer a system that provides for human needs. It has become a form of financial parasitism, stock market and currency speculation, dictated by banks and fictitious capital. The system has become divorced from the real world – a realm where the global one per cent thrive while the vast majority of humanity struggle to exist.

Driven by neoliberal ideology of deregulation and regressive taxation where the wealthy pay less and less in tax, whole countries have now found themselves in a form of debt slavery. That has in turn decimated social security through austerity on the unemployed, pensioners and workers. The collapse in economic production has been concealed by the spawning of fictitious capital, which results in the parallel universe of seemingly roaring stock markets and banking. But in the end, it is all debt that is dumped on wider society.

© REUTERS / Yannis Behrakis
Greece’s Crisis: Payday for Europe Nears – German Media
In 2007, the Bank of International Settlements estimated that global debt from the US-dominated financial casino economy was around $680 trillion – about tenfold the world’s entire GDP. Today, that figure is much higher.

Former World Bank analyst Peter Koenig, who has become a trenchant critic, estimates that total debt levels driven by Western neoliberal policies now stand at “quadrillions of dollars”. He says it is simply un-payable. In correspondence with this author, Koenig points out: “This debt can never be paid back because – well, paid back to whom? It doesn't really exist. It is a mere electronic book entry – that’s why the artificial crisis in Greece and Europe is so absurd. It could be wiped out in a nano-second and the world could breathe again.”

If such a debt write-off were to happen, the people to lose are the one per cent of the financial oligarchy that has come to dominate and dictate the policies of supposedly democratic governments. Part of the control over Western political leaders is that they have been personally bought by the oligarchy to orchestrate neoliberal policies. Partly, too, the so-called leaders seem intellectually incapable of creating an alternative policy. They are embedded in the problem.

Greece is a disaster that is unfolding across all Western countries. The scenes of chaos and immiseration on the streets of Athens will soon be seen on an equally massive scale across Europe and the US.

As a first step towards solution, the vast majority of people must not simply choose between full austerity or milder austerity. They must reject all austerity and demand that the chains of debt be smashed forthwith, as Peter Koenig points out.

Do you think Greece should exit the Eurozone?
Voted: 1750
All polls
But more than this, the capitalist system must be recognised as no longer viable as an organising mechanism for society and production. It has become spectacularly redundant. It is bankrupt: morally, politically and economically. To borrow the phrase of Greece’s finance minister Yanis Varoufakis we have to stop “extending and pretending”.

It is surely time for an epochal shift to fully democratise economies in order to serve the needs of the people and not just the insatiable lust of a tiny oligarchy and their political puppets. A start would be total cancellation of all global debt and taking banks into public control. We may call that new polity socialism, or not. The rhetoric is less important than the bottom-line – which is democratic control over the economy and society to serve people.