The Hidden Details of the New US National Military Strategy

Standard reporting on the document misses a few key details that make the strategy even more dangerous than people initially realize.

Much has already been written about the US’ National Military Strategy (NMS) since it’s updated unveiling last week, but most analysts haven’t pieced together the finer details of the document that speak to its most lethal aspects. Here’s what they’re missing and why these undiscussed components are so critical in understanding the Pentagon’s forthcoming plans:

Everyone’s spoken about Russia’s inclusion alongside Iran and North Korea as the main state targets of the NMS, but few have drawn parallels to George Bush’s 2002 “Axis of Evil” proclamation.

From this angle, Russia replaces Iraq, and the other two, Iran and North Korea, remain the same. Taking it even further, the purposefully ambiguous language being used in regards to China essentially qualifies it as the fourth member of the “Axis of Evil 2.0”.

The importance behind these four states’ inclusion is that each of them is located in a specific corner of Eurasia that the US plans to exploit in explaining its military buildup there.

The oft-repeated yet completely unproven “Russian threat” is used to justify the strengthening of NATO’s frontline border in Eastern Europe, while Iran, despite being in current negotiations with the US over its nuclear program, is a convenient bogeyman for excusing the billions of dollars of arms that the US regularly ships to the Arab NATO (GCC + Egypt).

China’s promotion of sovereignty in the South China Sea is the perfect rallying cry for the Pivot to Asia, and North Korea’s occasional missile tests and loud reactionary rhetoric invite the US to intensify its presence in Northeast Asia.

Altogether, the US is using inflated ‘threat’ assessments of Russia, Iran, China, and North Korea to continue its push into the Eurasian Heartland, in accordance with the theories of Halford Mackinder and Zbigniew Brzezinski.

The purpose of this global anti-missile ring is to neutralize the second-strike potential from Russia, China, and Iran (nuclear in the case of Moscow and Beijing, non-nuclear in the case of Tehran) so that the US can use the threat of a scot-free first strike to blackmail each of them into unipolar submission.

Russia, Iran, China, and North Korea have a legitimate reason to fear the US, and it’s written right in the NMS itself. According to its authors, one of the US’ “enduring national interests” that it’ll use military force to protect is “a rules-based international order advanced by U.S. leadership”, or to put it another way, unipolarity. 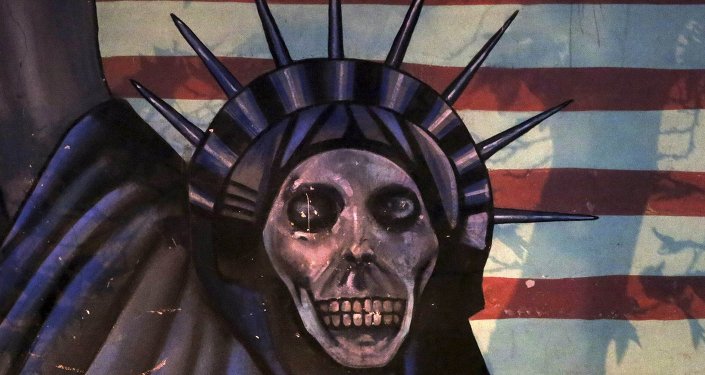 © AP Photo / Ebrahim Noroozi
Is US Pledge to Be the World Leader Just Wishful Thinking?
In the event of an “attack” on this or other interests, “the U.S. military will respond by inflicting damage of such magnitude as to compel the adversary to cease hostilities or render it incapable of further aggression.”

What the Pentagon is saying is that disproportionate military force will be used against its ‘enemies’ (Russia, Iran, China, and North Korea) if they can be tricked into conventionally responding to any of the US or its allies’ provocations against them.

This means that US-engineered proxy wars (the ‘Brzezinski specialty’, if one will) have the very real prospect of turning into direct wars against their true targets, thereby skyrocketing the uneasiness that each of the four aforementioned states must surely be feeling right now about the US and its nefarious NMS.

The Tricks Up Uncle Sam’s Sleeve

© AP Photo / Chairman of the Joint Chiefs
Uncle Sam Fails Again: Kremlin Ruins US Plans to Break Russo-German Ties
The US plans to facilitate its Doctrine of Disproportionate force through “the presence of U.S. military forces in key locations around the world”, which explains why it’s stacking up its deployments in Eastern Europe, the Mideast, Southeast Asia, and Northeast Asia. In terms of how it plans to act against its primary state targets in each of those theaters (its so-called “globally integrated operations), it’s listed a series of eight thinly veiled euphemisms that deserve to be exposed for what they truly are:

* “employing mission command”: The US will rely more on regional command posts to direct its forthcoming campaigns, seeking to make them semi-autonomous from the Pentagon via the broad mission objectives that they’re given. This would in turn allow them to take tactical advantage of certain battlefield/theater openings without having to continually refer back for specific permission, which would have the effect of making regional forces more adaptable and agile in their aggression.

* “leveraging global agility”: This denotes the current hypersonic weapons race that the US is engaged in and its vision of achieving a Prompt Global Strike.

* “partnering”: There is no difference between this euphemism and the Lead From Behind template.

* “demonstrating flexibility in establishing joint forces”: Building on the Lead From Behind idea, the US is expressing its eagerness to work with any and all forces in pursuing their mutual objectives, showing that it hasn’t learned its lesson from allying with terrorists and other unsavory actors in Afghanistan, Libya, and Syria, to name but a few. To the contrary, the Pentagon seems to believe that such ‘flexible joint forces’ give it a distinct battlefield advantage that should be emulated in future conflicts.

* “improving cross-domain synergy”: For as much as the US chides Russia for its alleged application of “hybrid war”, it’s basically saying that it wants to do the same thing. In fact, it already has, and it’s provably done so with maximum lethality during the War on Libya, the War on Syria, and EuroMaidan, when US-supported proxy forces escalated their destabilization to a conventional Western military intervention in the first battlefield, created an uncontrollable terrorist caliphate in the second, and succeeded in their urban guerrilla campaign to violently overthrow a democratically elected government in the third. If Russia is supposedly practicing ‘hybrid warfare’, then it’s obviously lagging far behind the US’ application of this dark art.

Drills Galore: Lithuania, US to Hold Over a Dozen Joint Exercises