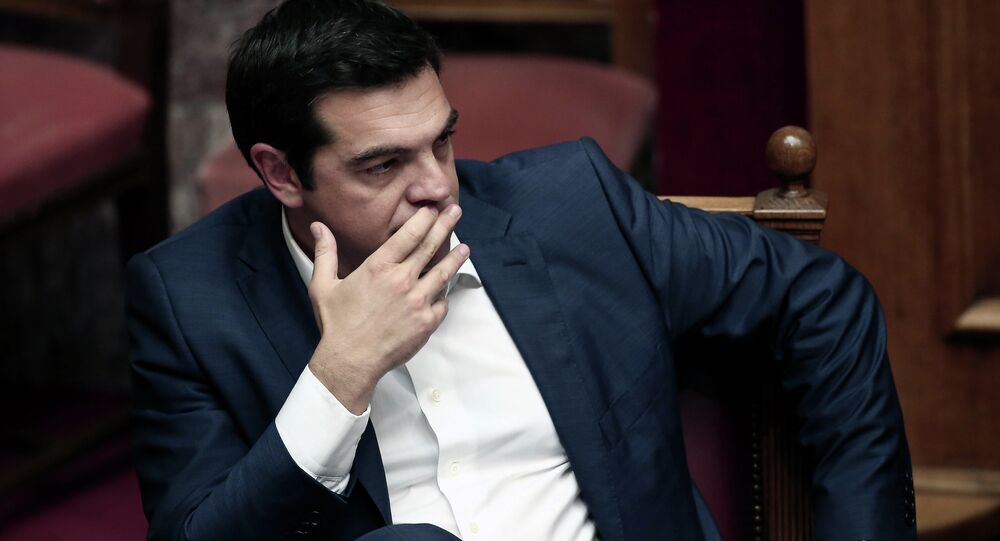 Prime Minister Alexis Tsipras allows the Greek people to decide their own fate via a democratic referendum. That’s enough to send the troika – the European Central Bank (ECB), the European Commission (EC), and the International Monetary Fund (IMF) - into a paroxysm of rage. Here, in a nutshell, is everything one needs to know about the EU “dream”.

Tsipras is, of course, right; he had to call a referendum because the troika had delivered “an ultimatum towards Greek democracy and the Greek people.” Indeed, “an ultimatum at odds with the founding principles and values of Europe.”

© AFP 2021 / ANGELOS TZORTZINIS
Tsipras: Bank of Greece to Suspend Bank Service, Introduce Capital Controls
But why? Because the apparently so sophisticated politico-economic web of European “institutions” – the EC, the Eurogroup, the ECB – had to come up with a serious political decision; and due, essentially, to their nasty mix of greed and incompetence, they were incapable of making it. At least EU citizens now start to get the picture on who their enemy is: the non-transparent “institutions” who supposedly represent them.

The – so far — 240 billion euro bailout of Greece (which featured Greece being used to launder bailouts of French and German banks) has yielded a whole national economy shrinking by over 25%; widespread unemployment; and poverty soaring to unprecedented levels. And for the EU “institutions” – plus the IMF – there was never any Plan B; it was the euro-austerity way – a sort of economic Shock and Awe — or the (desperation) highway. The pretext was to “save the euro”. What makes it even more absurd is that Germany simply couldn’t care less if Greece defaults and a Grexit is inevitable.

And even though the EU operates in practice as a clumsy, reactionary behemoth, the puzzling spectacle remains of otherwise reputable intellectuals, such as Jurgen Habermas, denouncing the Syriza party as “nationalistic” and praising former Goldman Sachs golden boy, ECB president Mario Draghi.

The Greek bailout referendum is set for July 5. What do you think the outcome will be?
Voted: 1986
All polls

The July 5 referendum goes way beyond Greeks responding whether they accept or reject more humongous tax hikes and pension cuts (affecting many that are already below the official poverty line); that’s the sine qua non by the troika — qualified as “barbaric measures” by many a Greek minister — to unblock yet another bailout.

A case can be made that a more pertinent referendum on July 5 would be posing this question: “What is the red line for Greece to remain part of the euro?”

Prime Minister Tsipras and Finance Minister Varoufakis turned upside down insistent rumors that they would accept any humiliation to remain in the eurozone. That only served to radicalize even more the German politico-economic elite – from Iron Lady Merkel to Finance Minister Schauble. Their not so hidden “secret” is that they want Greece out of the euro now.

And that is leading quite a few Greeks — who still believed in the benefits of a supposedly common financial house – to slowly start accepting a Grexit. With their heads held high.

The ECB has not gone totally nuclear – yet, crashing the whole Greek banking sector. But by de facto capping the Emergency Liquidity Assistance (ELA) this past weekend, all hell will break loose if millions of Greeks decide to withdraw all their savings early this week, ahead of the referendum.

The Bank of Greece, “as a member of the Eurosystem”, as a communiqué stressed, “will take all measures necessary to ensure financial stability for Greek citizens in these difficult circumstances.” This implies serious limits on bank withdrawals – thus allowing Greece to survive until referendum day.

Still, no one knows what happens after July 5. Grexit remains a distinct possibility. Projecting further, and taking a leaf from Wagner’s Ring, it also seems clear that the euro “institutions” themselves have been adding fuel to the fire that may eventually consume the eurozone – a direct consequence of their zeal to immolate the Greeks just like Brunnhilde.

© REUTERS / Alkis Konstantinidis
Varoufakis: If Europe Wants to Humiliate Greece, Do We Need Such Europe?
What Greece – the cradle of Western civilization — has already shown the world should make their citizens proud; nothing like a shot of democracy to make the Gods of Neoliberalism go berserk.

One may be tempted to invoke a post-modern Diogenes, the first homeless philosopher, with a lantern, looking for an honest man (in Brussels? Berlin? Frankfurt?) and never finding one. But instead of meeting the greatest celebrity of the day – Alexander the Great — let’s imagine another encounter as our post-mod Diogenes suns himself in an outdoor court in Athens.

“I am Wolfgang Schauble, the Lord of German finance.”

“I am Diogenes the Cynic.”

“Is there any favor that I may bestow upon you?”