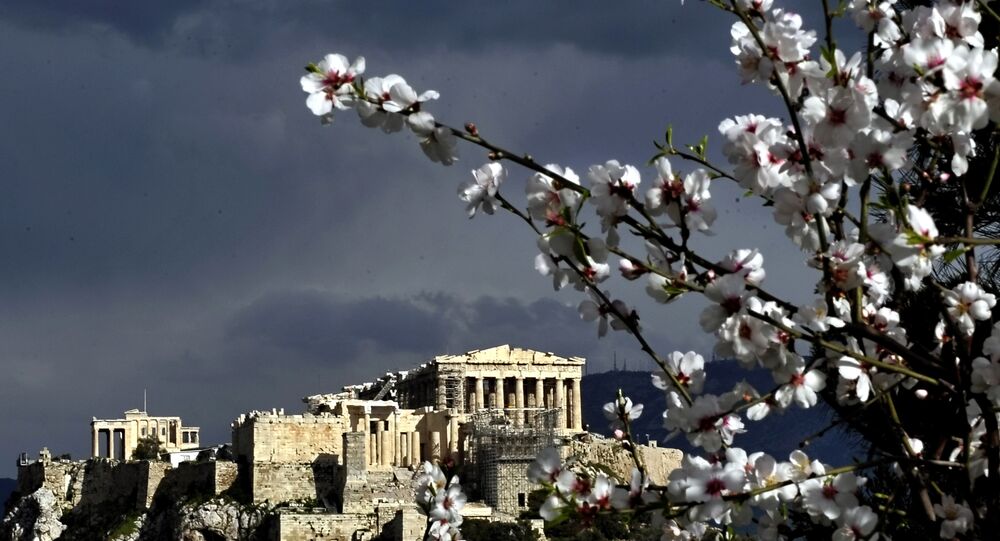 © Flickr / Theophilos Papadopoulos
Incompetent ECB Policies Brought Greece to Its Knees – French Media
The truth is that Greece’s debt mountain has been incurred from years of wasteful military splurging. That is the tragic downfall of the country, which European creditor governments and the mainstream news media tellingly ignore.

But in this understanding of Greece’s modern tragedy, there is hope for democratic renewal and redemption. Because that realisation permits a radically different option to restore Greece’s economy in a way that is rational and achievable, without piling up more debt and misery for the population. Instead of more austerity imposed on workers and pensioners, the solution is for Greece to embark on a massive disarmament programme to overturn decades of reckless militarism.

Greece’s outstanding total debt is around $320 billion – or 175 per cent of its national economic output (GDP). Its creditors – the Troika of European Union, European Central Bank and the International Monetary Fund – are insisting that the Athens government must oversee more public cuts.

The reality is that austerity is only driving the Greek economy into further depression and debt.

That inevitably means more and more of the Greek people’s sovereign rights whittled away to the point of becoming a vassal state dictated to by foreign governments and finance capital.

As a foreboding sign of things to come, Greek Prime Minister Alexis Tsipras’ latest offer of raising corporation taxes in place of cutting pensions was slapped down last week by the Troika.

The Greek bailout referendum is set for July 5. What do you think the outcome will be?
Voted: 1986
All polls
The imperious demand for more austerity has now forced the Greek government to put the choice to the public in the form of a proposed referendum on the EU’s bailout terms, to be held on July 5.

Greece’s debt crisis appears to be heading to an even sharper crisis point. But the Greek origin of that word “krisis” also has a positive connotation of decisive event. The Greek people should reject the never-ending debt addiction that the EU creditors and IMF have hooked the country on. For that way only foreshadows increasing austerity and anti-democratic dictate.

What the Greek people can turn to is a realistic and altogether more democratic and humane option – of demanding their country slash its monstrous military spend.

Even after five years of economic catastrophe, Greece’s annual military budget amounts to $4 billion, according to the Stockholm International Peace Research Institute. That translates to 2.2 per cent of the nation’s GDP – a colossal drain on the economy.

© REUTERS / Yannis Behrakis
Gripping Drama: France, Italy to Split Eurozone Not Greece - Spanish Media
If Greece were to cut its outsized military budget by half that would generate $2 billion in one year alone, which would pay off its immediate bill to the IMF and help the country reach a 1 per cent budget surplus that the Troika has set for 2015. In other words, that source of finance would obviate any further need for cutting pensions and workers’ salaries.

Why the Syriza government of Alexis Tsipras, which claims to be a radical socialist coalition, does not pursue this more imaginative and democratic alternative is a curious question. Last week, Tsipras offered to cut the military budget by $200 million – or a mere 5 per cent. But the offer was rebuffed by the IMF because it stated that its rules do not permit interference in a country’s defence policy. To which Tsipras and the Greek electorate should respond with their own rebuff of IMF absurdity – especially evident with the IMF’s throwing billions of dollars to the regime in Kiev which is waging war on the eastern Ukrainian population.

But that’s only a trifling start to addressing the Greek tragedy. The Greek people have legal and moral grounds to repudiate the entire debt mountain as illegitimate or, as economists would say, “odious debt”.

During the decade up to the onset of crisis in 2010, Greece was regularly spending 7 per cent of its GDP on military. Some estimate that during that decade the country spent a total of $150 billion on defence – or half of the current debt pile.

As Greek economist Angelos Philippides told the Guardian back in April 2012: “For a long time Greece spent 7 per cent of its GDP on defence when other European countries spent an average 2.2 per cent. If you were to add up that compound 5 per cent [difference]… there would be no debt at all.”

Moreover, Greece’s past military expenditure was mired in corruption.

In October 2013, ex-defence minster Akis Tsochatzopoulous of the previous PASOK government was jailed for 20 years in a bribery case involving $75 million in kickbacks.

© AP Photo / Virginia Mayo
Athens Needs to Tell Greeks What at Stake in Case of Grexit - EC President
And here is an ironic twist in this Greek tragedy. The biggest European weapons dealers to Greece are German and French companies. In the Tsochatzopoulous scandal, German company Ferrostaal paid a fine of $150 million for its part in using bribes to clinch the sale of four submarines.

It was an open secret that Greece’s military largesse was for years stinking with corruption. Yet the German and French authorities did nothing to derail this gravy train. The Berlin and Paris governments continued to ply Greece with loans because the country was using the money to buy massive amounts of weapons from their manufacturers.

Today, the single biggest institutional creditors to Greece are Germany and France. Those countries stand accused of criminal irresponsibility in racking up Greece’s debt precisely because so much of the money was being spent to prop up the German and French economies through lucrative arms sales.

It is a monumental irony that German leader Angela Merkel is most vehement in lecturing Greece about “living within its means”. Rather than directing corrective action at the source of the problem, it is Greek workers, pensioners, the young and infirm who are being made to pay for the largesse that they actually never saw.

If the Greek people repudiate the entirely artificial debt crisis, it would restore their country’s economy on a sound footing. Of course, the country’s bloated military will not be happy with that. The danger of a military coup is a real threat given the country’s history of fascist dictatorship during the US-backed “regime of the colonels” between 1967-1974. Perhaps this is what the Syriza government is afraid of.

And, to be sure, the Troika of EU leadership, ECB and IMF will be intensely displeased if the Greek people go for the radical alternative of rejecting debt and austerity.However, in the battle shaping up, the Greek people have natural justice on their side. They should and can reject debt slavery and dictate. By doing so, Greece may redeem the meaning of “Demos Kratia” – People Power. And what a beautiful denouement in the Greek tragedy that would be, not only for the people of Greece but right across all the debt-ridden Western countries.

Greece is hailed as the ancient birthplace of democracy. Two millennia on, it could also be the very place for its renaissance.