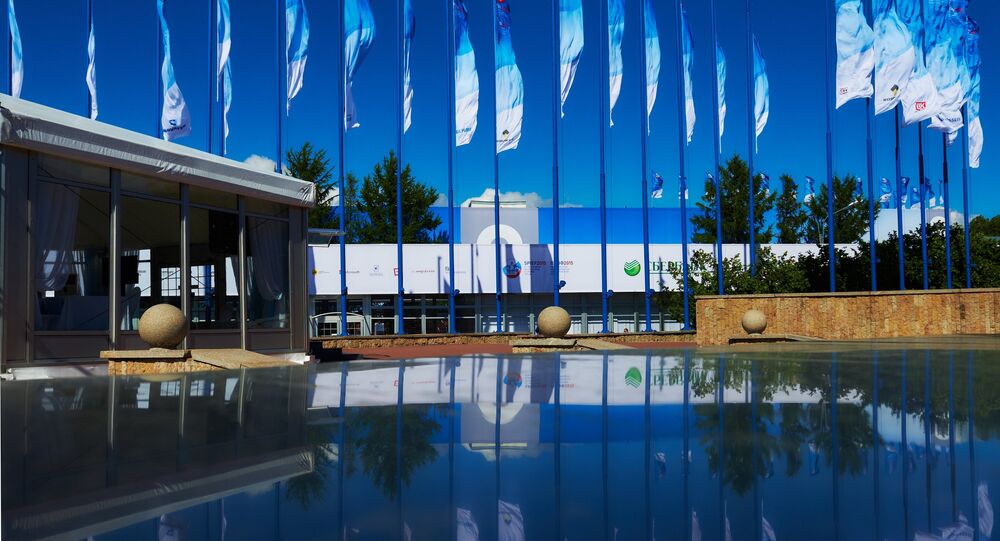 This year’s Saint Petersburg International Economic Forum (SPIEF) saw the promotion of Russian economic interests all across the world.

SPIEF 2015 was a record-breaking event that attracted 10,000 people and brought about 200 deals worth $5.4 billion. Aside from this spectacular success, SPIEF 2015 also confirmed that Russia’s economic interests are indeed global, and that partners all across the world are eager to do business with it. Here are the 5 most notable geopolitical takeaways from the forum involving India, Nord and Turkish Streams, Saudi Arabia, Egypt, and Myanmar:

Russia’s Asian Pivot appears primed for expansion with the news that India is beginning talks with the Eurasian Economic Union for a free trade zone.

State-to-state economic interest is thus at an extremely high level, but perhaps even stronger is the interest that Indian businesses have in invigorating ties with their Russian counterparts.

Chandrajit Banerjee, Director General of Confederation of Indian Industry and one of the moderators for the round table on Russia-India: Mutual Investment Opportunities, spoke about the wide array of investment opportunities that both sides see in the other, and how Russia and India are historical and trust-worthy economic partners.

© Sputnik / Grigoriy Sisoev
Russian-Indian Trade to Grow Despite Western Sanctions
Shiv Vikram Khemka, a partner of SUN Capital Partners and the founder of SUN Group, noted that both sides aren’t living up to their potential, and that this signifies the need to intensify their relationship by taking it to a new geopolitical level.

This sentiment was echoed by Sammy Kotwani and Arun Prakash, the honorary president of the Indian Business Alliance and an advisor to the organization, respectively, who spoke more about the viability of the North-South trade corridor through Iran and the complementary interests that link all three parties.

Mr. Kotwani cautioned, however, that a change in attitude between Russian and Indian businessmen and bureaucrats must first happen to in order to facilitate the shared strategic vision between both of their national leaders, as the two countries are currently underperforming in terms of their potential.

If they succeed in aligning their priorities, then Moscow and New Delhi stand to have one of the world’s most prosperous economic partnerships in this century.

Pipelines From The Baltic To The Balkans

© Sputnik / Maksim Blinov
Business Before Politics: Europe Wants Gazprom to Deliver More Gas
Russia’s energy relations with the EU took a long stride forward with two pivotal pipeline announcements, one of which was expected but the other which took most observers completely by surprise.

Greece and Russia finally signed a memorandum about the long-awaited expansion of the Turkish Stream pipeline to the Hellenic Republic through a project that Prime Minister Alexis Tsipras described as “Greek Stream”.

This spurred Republika Srpska President Milorad Dodik to reveal in an exclusive Sputnik interview that “Serbia will unquestionably participate in the Turkish Stream” and that Macedonia is expected to follow suit as well, raising hopes that the autonomous republic that he leads in Bosnia and Herzegovina could also get in on the arrangement, too.

One of the biggest surprises of SPIEF-2015, and one could argue, of the entire year so far, was that Gazprom, Royal Dutch Shell, Germany’s EON, and Austria’s OMV signed a memorandum to build a new gas pipeline along the existing Nord Stream route.

The anticipated project would supply Europe with 55 billion cubic meters of gas a year and guarantee stable energy transit to Germany after shipment through Ukraine is discontinued in 2019. Both the Turkish/Greek Stream and New Nord Stream projects signify that Ukraine is the biggest energy loser in Europe, but the latter project ominously infers that Germany is hedging its bets in case the former is suspended or canceled amid expected American-directed Balkan destabilization.

One of the most unexpected highlights of the forum was the attendance of Saudi Defense Minister Prince Mohammed bin Salman, who is also the third-in-line to the throne and one of the most influential individuals inside the kingdom.

Russia and Saudi Arabia signed an agreement on nuclear energy cooperation, and it was also revealed that President Putin and the Prince discussed possible cooperation in the arms trade.

Some observers have taken this to mean that Riyadh is rejecting Washington over the latter’s planned nuclear deal with Iran, but something less extreme and more pragmatic may likely be taking place.

Russia’s diplomatic efforts in Syria, Iran, and Yemen over the past few years have once more made the country a Mideast power, and amidst the Syrian stalemate and failed War on Yemen, Saudi Arabia might finally be thinking that it’s time for it to constructively reach out to Moscow outside the supervisory framework of the US.

© Sputnik / Sergey Guneev
Putin and the Saudi Caravan
The two sides obviously have diametrically opposing views on Syria, and it’s likely that Putin and the Prince discussed this bone of contention on the sidelines of SPIEF 2015. It’s not known whether any progress was made in moderating the Saudis’ fixation on regime change or getting them to abandon their support of the ultra-radical ‘Army of Conquest’ and other proxy groups in the country, but the very fact that Saudi Arabia and Russia are publicly engaging in such high-level bilateral talks as nuclear energy cooperation and possible weapons contracts indicates that the two are surely communicating even more intimately behind closed doors.

Russia needs Saudi Arabia to retreat from its deadly covert offensive on Syria in order for peace to return to its beleaguered ally, while the Saudis want Russian arms and nuclear technology both to grandstand in front of Iran (which they mistakenly view as their arch enemy) and make the US jealous so that they can squeeze more supportive concessions out of it.

In Riyadh’s regional calculus, anything that it can do to seemingly elevate its position against Iran takes precedence over its interests against Syria, so it could possibly strike a deal with Russia to withdraw its support of regime change proxies in Syria in exchange for weapons systems (not small arms that could possibly be shipped to Wahhbist agents).

Russia’s history of selling such armaments to both Armenia and Azerbaijan while still maintaining positive relations with both of them shows that it could possibly do the same with Iran and Saudi Arabia, and its energy cooperation with Turkey, despite Ankara’s hate for the Syrian government, shows that Moscow can handle pragmatic business relations while not selling out its decades-long and loyal Syrian ally.

Riyadh’s ‘checkbook diplomacy’ has netted it a huge catch with Cairo, which recently proved allegiance to its financier through participation in the Saudi’s War on Yemen via the Arab NATO. Where King Salman leads, Egyptian President al-Sisi follows, and this also goes relations with Russia.

Mounir Fakhry Abdel Nour, Minister Of Industry and Foreign Trade, emphasized how much Egypt wants to work together with Russia and restore the formerly fraternal ties that existed between the two for most of the Cold War.

The future signing of a free trade agreement would go a long way in this regard, and it would also open up a potential market of over 1 billion people to Russia’s goods and services due to the overlapping free trade agreements that Egypt is currently a part of.

Last but not least, Myanmar occupied an unexpectedly important role at SPIEF 2015. It signed a nuclear energy cooperation agreement with Russia, and Vice President U Nyan Tun stood alongside President Putin in giving a keynote plenary address.

Myanmar arguably has its fair share of domestic destabilizations (the civil war, Aung Sun Suu Kyi, the Rohingya, and cross-border anti-Indian militants being the most impactful), but the nuclear agreement with Russia and the prized role that President Putin afford to the country’s Vice President shows that Moscow supports Naypyidaw and clearly believes that its problems are manageable.

The risks of doing business in Myanmar might appear high, but if the country fully stabilizes (as Russia appears to be forecasting), then the benefits would be enormous and the country’s strategic partners heartily rewarded with a prime position in ASEAN’s fastest-growing economy.