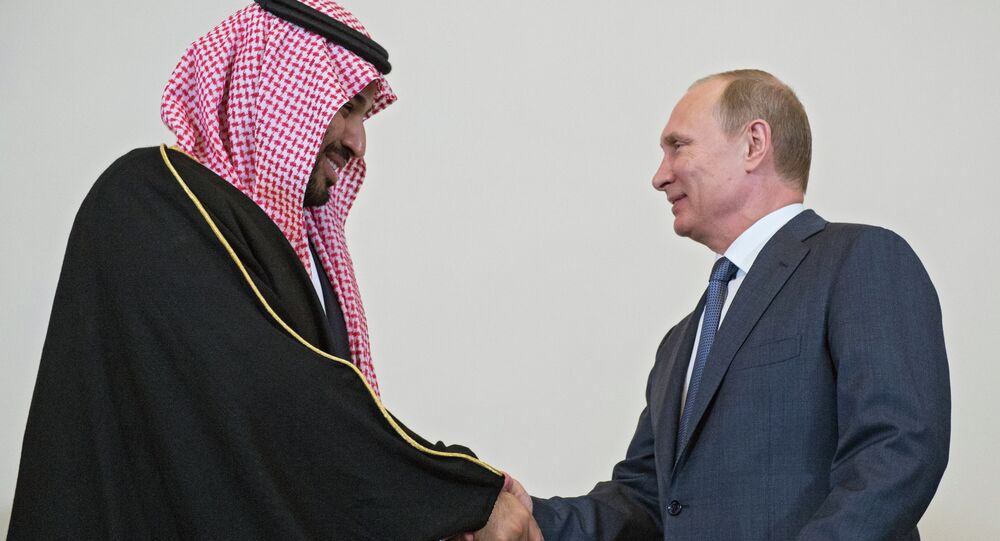 Putin and the Saudi Caravan

So guess who walks into a room in St. Petersburg this past Thursday; Saudi Arabia’s Deputy Crown Prince – and Defense Minister – Muhammad bin Salman, favorite son of King Salman; Foreign Minister Adel al-Jubeir (former ambassador to the US and very close to key players in the Beltway); and all-powerful Oil Minister Ali al-Naimi. They were all there for a face-to-face with President Vladimir Putin, on the sidelines of the St. Petersburg Economic Forum.

© Sputnik / Iliya Pitalev
SPIEF Shows West Wants to Return to Business as Usual in Russia
In principle, there could not be a more spectacular game-changer-in-waiting. A royal Saudi caravan offering tribute, in the form of incense, gold and myrrh (or higher oil prices)? No one knows, yet, how this will play out in the New Great Game in Eurasia, of which a major spin-off is Cold War 2.0 between the US and Russia.

Putin and King Salman – very discreetly — had been in touch over the phone for weeks. The King’s son invited Putin to Riyadh. Accepted. Putin invited the King to Moscow. Accepted. No question, the suspense is already killing everybody. But is this real life? Or smoke and mirrors?

Who's allied with whom?

First of all, the crucial energy front. Putin is now discussing what was, so far, an oil price war but may become – and the operative concept is “maybe” – a “petroleum alliance” (in Naimi’s words), directly with the source: the House of Saud.

Assuming this entente cordiale will eventually lead to an oil price rise, Putin scores a major internal victory against what could be described as an Atlanticist Fifth Column trying to undermine Russia’s multipolar drive. Moreover, geoeconomically, it doesn’t hurt that Moscow is now able to add Saudi Arabia as a top purchaser of superior Russian defense systems.

Russian intelligence is fully aware that the House of Saud has been tremendously “disappointed” – and that’s a monster euphemism – with the self-described “Don’t Do Stupid Stuff” Obama administration, for a vast number of reasons, not least the concrete possibility of an Iran-P5+1 nuclear deal on June 30, which is code for Washington finally accepting to breach its own Wall of Mistrust against the Islamic Republic, built 36 years ago.

© AP Photo / Hasan Jamali
Saudi Arabia Mulls Russian Arms Deal
A highest-level meeting with the House of Saud, on top of it in Russia, ruffles infinite feathers in the Beltway. This won’t go unpunished – for both Moscow and Riyadh. After all, real Masters of the Universe – not their paperboys in different sectors of the US government — have been mulling for a while how to dump the House of Saud.

Russian intelligence also knows that in Washington, the House of Saud actually depends on the good favors of the Israeli lobby – and it’s all about demonizing Iran. And now an Iran nuclear deal – which will “normalize” Tehran with the West – could not provoke a more glowing red alert in an already vulnerable Riyadh.

Putin’s message to Iran is more sophisticated. Moscow has been very active working for a successful Iranian nuclear deal; so that invalidates the theory Moscow might be starting to play Riyadh to extract “concessions” from Tehran.

There are no “concessions”. Russia — and eventually Iran — will both provide energy to European markets. Not immediately, because the upgrading of Iranian infrastructure will take years and torrents of investment. But as soon as next year, a non-sanctioned Iran may be finally admitted to the Shanghai Cooperation Organization (SCO).

So Iran won’t be turning feverishly pro-West from one day to another – as much as some, non-neocon Beltway factions dream. Iran will be solidifying its regional power; engaging in normalized relations especially with Europeans; but most of all accelerating its Eurasian integration, which implies ever close relations with both Russia and China. Not to mention that in Syria, Iran and Russia are exactly on the same geopolitical page, which happens to be totally opposed to the House of Saud’s.

Putin’s move also carries the potential of isolating Qatar – which is indirectly, but very effectively, subsidizing al-Qaeda in Syria to facilitate its ultimate geoeconomic aim; a natural gas pipeline from South Pars through Saudi Arabia and Jordan to the Mediterranean coast.

The rival project happens to be the Iran-Iraq-Syria pipeline, which is now perennially threatened as a great deal of “Syraq” is under the vise grip of ISIS/ISIL/Daesh. Here, we see the fake Caliphate supporting Qatari designs, geoeconomically, and Saudi, geopolitically.

What is certain is that the top-level Saudi pilgrimage to St. Petersburg could not be more antithetical to (disgraced) Bandar Bush threatening Putin in August 2013 to unleash Chechen jihadis on Sochi if Moscow didn’t back off on Syria.

It's tempting to watch this fabulous unfolding drama as a subplot of the BRICS – mostly Russia and China – advancing in the Middle East, with Washington as the loser. It’s more like Putin playing Multipolar World, not Monopoly, and ensuring the Empire of Chaos will really have to sweat to keep its puppet/vassal blocs, such as the GCC, “on message.”

© AFP 2020 / Paul J. RICHARDS
Saudi FM: Russia, Saudi Arabia Can Tackle Challenges Through Cooperation
It remains to be seen, long-term, whether this is not a desperate Saudi play to extract “concessions” from its imperial protector. But assuming this is a real deal, Moscow retains the ability to match both Iran and Saudi Arabia’s interests, and ensure this concerted “pivoting to the Middle East” may turn out to be as spectacular as Russia’s “pivoting to Asia” and China’s New Silk Roads.

There is no evidence so far to attest that the House of Saud has conclusively seen which way the wind is blowing, that is, towards the 21st century Silk Road Eurasian caravan, no matter any exceptionalist wishful thinking to the contrary.

They are fearful; they are paranoid; they are vulnerable; and they need new “friends”. No one better than Putin – and Russian intelligence — to play the new groove in multiple ways. The House of Saud can hardly be trusted; see the latest, Wikileaks-released, Saudi cables. So this may turn out to be a geopolitical/geoeconomic bonanza. But it can also be a case of keeping your friends close, and your enemies closer.