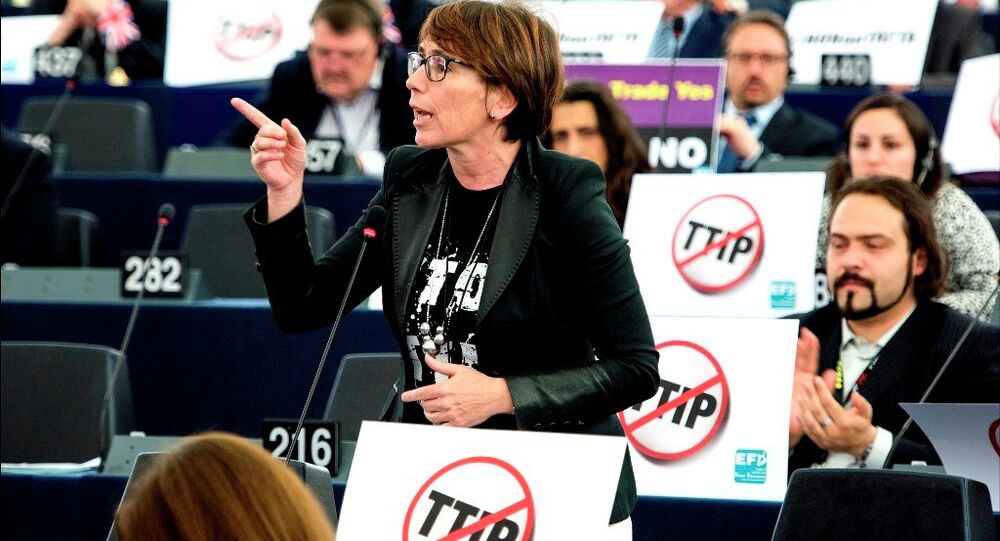 The Myth of Global 'Free' Trade

The key to TTIP is the so-called Investor-State Dispute Settlement mechanism that essentially gives corporations free reign to sue governments using a “failure to implement” provision, if state policies or legislation interfere with profits. But is this all about trade?

There was a direct, crucial "secret" agenda linking the G7 meeting in Germany and the Bilderberg meeting in Austria last week; the advancement of the virtually secret negotiations towards the Transatlantic Trade and Investment Partnership (TTIP), the massive free trade agreement between the US and the EU.

Even though the corporate powers behind TTIP are itching for a deal to be reached before the end of 2015, serious (negotiation) trouble remains.

© Flickr / Global Justice Now
TTIP - Part of Grand US Plan to Isolate Russia From Europe
And then there was last Friday's vote in the US Congress. What happened were in fact two votes; one on giving the US government the "fast track" authority to conclude trade deals, mostly, in this case, the Trans-Pacific Partnership (TPP); and another one on help for US workers struggling to compete with imports as a result of trade deals.

"Fast track" passed, but not the adjustment assistance. So the US Senate will need to review "fast track". The corporate powers behind TPP — and TTIP for that matter — were not amused.

Yet the whole thing goes way beyond total presidential authority to negotiate shady deals such as the TTIP, the TPP and the Trade in Services Agreement (TiSA).

The Obama administration is obsessed with plugging a torrent of benefits for US workers once a Pacific deal is clinched. That's eminently debatable.

From the point of view of other nations, TPP is hardly a panacea. Washington offers no new, improved market access. TPP shuts out China completely — which is ridiculous; Beijing is the top trading partner of most of these nations. And the key to TPP is corporations laying down the law on intellectual property rights — which opens the door to all sorts of social Darwinist abuses.

© Flickr / European Parliament
Protests and Parliament Chaos Hurting US Plans for a 2015 TTIP Deal
On TTIP, Brussels is saturated with spin swearing trade deal negotiations are not that "secret". The European Commission (EC) brags they post negotiation texts on its website, unlike Washington. Some they do. But not all, including the most sensitive.

One can already foresee the proliferation of kangaroo courts labeled "arbitration tribunals" stuffed with pricey corporate lawyers. So much for social "justice".

But is this all about trade? Of course not.

Welcome to NATO on trade

The giveaway is how the Obama administration is desperate to wrestle down Japanese resistance — going on two solid years now — against many of TPP's provisions. The proverbial "US officials" have been frantically spinning that TPP is crucial for the US "pivot to Asia".

Even Pentagon supremo Ash Carter went overboard two months ago, saying that TPP was "as important to me as another aircraft carrier."

© REUTERS / Jonathan Ernst
Trans-Pacific Partnership Deal Undercuts US Health Care System
And all this has happened as Washington was trying to force its allies — with no success — to shun the Chinese-led Asian Infrastructure Investment Bank (AIIB). Can't blame the Obama administration for not being on message; China can't lead a development bank, and China can't have a say writing global rules and standards for trade and investment.

The heart of the matter is these three mega-deals — TTP, TTIP and TiSA — are the ultimate template of a Bilderberg group wet dream:  global corporate "governance".

And the Pentagon's own giveaway that TPP is the "strategic" economic arm of the "pivot to Asia" reveals how politicized "trade" has become. Under TPP, Chinese companies will have tremendous handicaps competing with US companies in both US and Asian markets. Call it yet another facet of "containment".

TTIP, TTP and TiSA are in fact a Hydra-like head; they follow the same geostrategic logic of NATO on trade — transatlantic and trans-Pacific; the "West against the Rest". Not accidentally, the BRICS are excluded. And no wonder the negotiations are secret; global corporate "governance" is not exactly a pop hit in any latitude.

Make no mistake; there's plenty of opposition to TTIP in Europe, at least among the few concerned — and horrified — EU citizens who took the trouble of trying to cut through the secrecy.

In Germany, there have been serious demonstrations. The SPD — part of the coalition government under chancellor Merkel — is definitely against it. Italians learned TTIP would cost the country no less than 1.3 million jobs. It's useful to compare TTIP with NAFTA; in 12 years, the US actually lost 1 million jobs, as corporations and companies preferred to delocalize to Mexico, where costs are much lower.

Even Brussels was forced to admit TTIP will actually mean unemployment; a lot of jobs will definitely move Stateside, where labor standards and trade union rights are much lower.

TTIP will concern 850 million people between North America and Europe; that's roughly 45% of global GDP. Trade in question amounts as it stands to 500 billion euros a year. That could be arguably configured as "advanced globalization" — with not so much interference from emerging markets.

Enter the European idea that as a consequence of this leading role, the EU has the most advanced rules on health, consumer protection and quality of public services (it varies a lot from country to country; can't compare France with Romania, for instance).

Thus no wonder high-quality agricultural producers in the Club Med countries  are terrified that TTIP will mean a de facto barbarian invasion. Italians are terrified about the onset of a monster, false made in Italy market, with US corporations calling any mongrel GMO concoction a "Parma" ham or a "gorgonzola" cheese.

A good test is to hit your average US supermarket. Talk about a horror show; at least 70 per cent of all processed foods are GMO-infested. The EU allows virtually no GM foods. Not to mention the toxic front; in the EU a company must prove a substance is safe before it's commercialized. In the US, anything goes.

Under TTIP, public health, education and water services in the EU will be devastated, and taken over by US corporations. Food safety laws, key legislation over the environment, and banking regulations will be turned upside down.

The spin from TTIP peddlers is that Globalization 2.0 will lead to a "surge" of 0.5% of the EU's collective GDP. That's not exactly a Chinese rate. But when you're austerity-ravaged, you drink any Kool aid you can get. And eat it with plastic Parma ham.

Why is US Secretive About Trans-Pacific Partnership Deal?