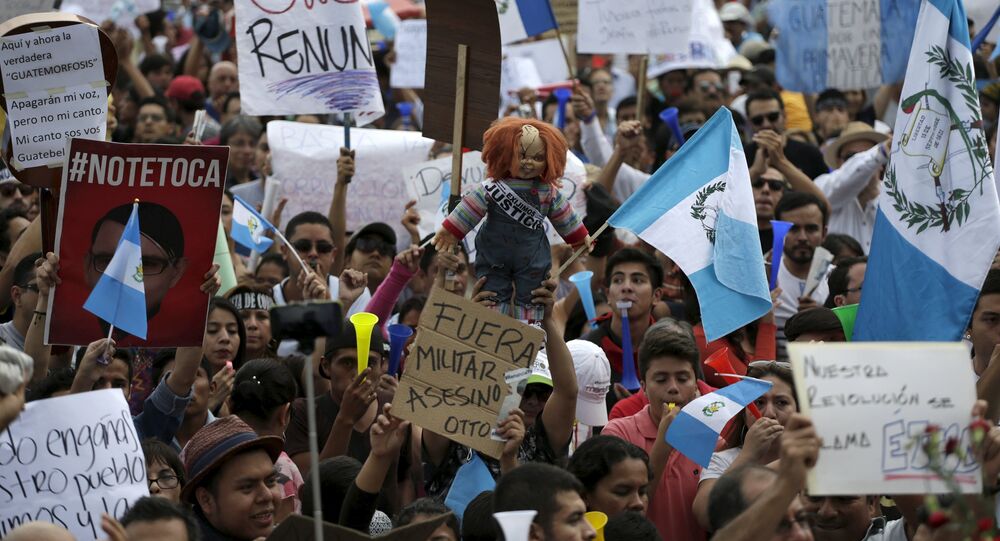 What’s Going on in Guatemala?

The Western media is curiously ignoring the month-long Guatemalan Revolution that’s already forced many ministers to resign and is now threatening to take down the President.

Large-scale protests typically attract loads of Western media attention, especially if they've been consistently ongoing for over a month, but Guatemala appears to be a curious exception. Tens of thousands of citizens have taken to the streets to protest their government's rampant corruption, and the political crisis has only grown more acute with the domino resignation of many high-ranking officials. This surprise eruption of people's power, having already led to many political casualties, still remains suppressed from the international spotlight, while ‘flashes in the pan' such as the Macedonian Color Revolution attempt have instead captivated the Western imagination. The reason for this is clear, and it's that the West only pays attention to political destabilizations that promote its interests, which clearly isn't what's happening in the Central American country. So, what's really going on in Guatemala?

Rotten To The Top?

© REUTERS / Josue Decavele
Thousands of Guatemalans Protest, Demand Resignation of Their President
Guatemalans are enraged by an ever-expanding set of scandals that they say goes straight to the stop of their government. It all started in mid-April when authorities arrested the head of the Guatemalan Tax Authority and his predecessor for a customs fraud scheme, dubbed by the press as "La Linea" or "The Line". By one degree or another, Vice President Roxana Baldetti was linked to it, and her resignation at the beginning of May emboldened protesters to continue their anti-corruption crusade and take it as far as they could. What happened afterwards was a domino effect of revelations and resignations, with minister after minister abruptly leaving office after new scandals rocked their reputation. In under a month, the Minister of Energy and Mines, Interior Minister, Environment Minister, State Intelligence Secretary, Vice Minister of Security, Minister of Public Health and Social Assistance, Central Bank President, and Secretary to the President have all either resigned or been arrested due to the latest scandals, and the protesters have said they won't stop until President Otto Perez Molina steps down as well.

The reason they're so opposed to him, besides what they allege are his circumstantial links to all of these corruption scandals, is that they accuse him of having blood on his hands from the country's three-decades-long civil war.

During that time, Molina was a special forces major and partook in a large number of ‘counter-insurgency' operations against rural natives, initiated ostensibly because they were thought to be ‘communist rebels'. The wanton violence unleashed at the time claimed the lives of around 200,000 people, over 80% of whom were Mayans. Former President Efrain Rios Montt was found guilty of genocide in 2013 for his role in ordering the genocidal operations (which peaked during his brief leadership in 1982-83), although he's now facing a retrial because of procedural errors prior to his original conviction. Still, Montt's initial sentence gave hope to Molina's critics who allege that he, too, was involved in the genocide and must be brought to justice, and that the only way to do this is for him to be removed from the Presidency that he's held since 2011, stripped of his current legal immunity, and put on trial.

The collapse of most of a country's government and accusations that its recalcitrant and isolated leader was previously involved in genocide should be serious enough news to warrant the world's attention, but this isn't the case with Guatemala. The US is doing whatever it can to deflect international focus away from this crisis and towards more politically ‘useful' ones like phantom ‘Russian aggression' because it wants to save face from having associations drawn between it and the increasingly delegitimized Molina, who's actually a close American ally. The US' quest to win ‘hearts and minds' in the region falls flat on its face when it's linked so intimately with as corrupt of a government as Molina's has turned out to be, and not only that, but the US wants to avoid any scrutiny of its historic relations with the country that will reveal their consistently unscrupulous nature.

All Latin American countries have had issues with the  US at some time or another, but Guatemala's suffering is symptomatic of the entire region's. It became the first Cold War casualty in the area when the CIA overthrew President Jacobo Arbenz Guzman in 1954, marking its second successful coup after Iran's from the year prior. The Guatemalan leader's only ‘sin' was to have pursued left-wing policies that threatened the interests of the United Fruit Company, which in turn accused him of being a ‘secret communist' and agitated for his immediate removal. In order to sell this tall tale to Washington, the company hired the services of Edward Bernays, the ‘father of public relations' and world-famous author of the 1928 guide to, you guessed it, "Propaganda". He was so successful in his information campaign that he and his associates even published a book on "The Engineering Of Consent" just one year after Arbenz's overthrow.

In the years to come, Guatemala would find itself caught in a deadly US-supported civil war from 1960-1996, where Washington firmly supported the government as it carried out its genocidal ‘anti-communist' purge. It can even be argued that the US' steadfast backing of all right-wing Latin American governments during that bloody Cold War era was a lasting legacy of the superbly effective propaganda campaign that Bernays had earlier waged in inventing the non-existent ‘communist threat'. When the state-sponsored violence in Guatemala finally ended, the country was in a much worse position than before. Other than the unfathomable human toll that it inflicted, the civil war entrenched the position of the dynastic oligarchy that Arbenz had once tried to dismantle. This towering colossus of corruption and corporate interests intersects in the hands of a small number of highly placed families that form the core of the country's elite, and it's this socio-economic background that set the stage for the current crisis.

The US foreign policy establishment is rattled by the Guatemalan Revolution because of its possible regional reverberations. Here's why the State Department is anxious:

Chavez-inspired Leftism is a real force in Latin American politics, and many protesters believe that it represents the only realistic solution to Guatemala's woes.

The anti-corruption protests have already spread to Honduras, where thousands marched last week against the President, and could potentially spill over into El Salvador. If they succeed in their revolutions, then the so-called ‘Northern Triangle' underpinning US control over Central America could be shattered.

The US Strategy For Engagement In Central America envisions "linking Central America to an integrated North America" (a euphemism for NAFTA expansion), but if the ‘Northern Triangle' undergoes a series of left-wing people's revolutions (the ‘Latino Summer'), then their new governments would likely reject this path of unipolar development and look towards BRICS instead. It still won't be easy for them, however, since Obama's first coup was overthrowing Honduran President Manuel Zelaya in 2009, and it's likely he'll resort to similar subterfuge if need be to once more stop the rise of leftist politicians in Central America.