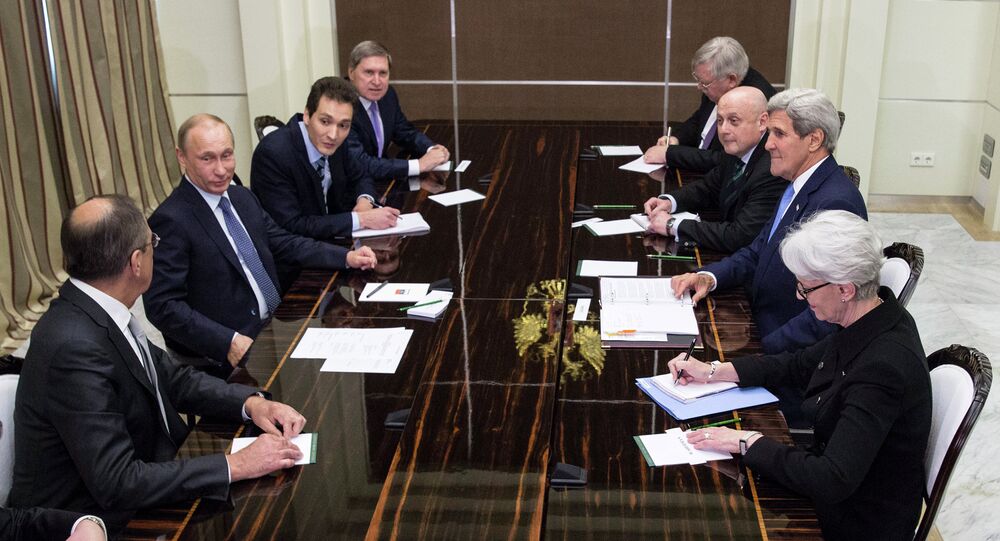 The meat of the matter in the by now legendary May 12 meeting in the Kremlin between President Putin and US Secretary of State John Kerry is that, after a relentless torrent of US demonization of Russia, a deal – of sorts – may have been reached. Needless to add, no official source, in either Washington or Moscow, will confirm it.

© Sputnik / Igor Mikhalev
Washington Throws in the Towel on Ukraine, Shifts to 'Plan B'
Geopolitical imperatives lead us to think that Kerry – a de facto mere messenger of the real Masters of the Universe in the Beltway — asked Putin for “help” in the former, American-launched “Greater Middle East”, and to facilitate the clinching of the possibly imminent P5+1 nuclear deal with Iran.

And Putin told Kerry that was a deal as long as the hysteria over Ukraine was immediately defused.

There is no hard evidence – yet – that Washington is prepared to finally admit, even tangentially, to its monumental geopolitical bungling in Ukraine; the lightning-fast deepening of the Russia-China strategic partnership is just one of the key consequences. End of sanctions would be a first fact on the (Eurasian) ground.

Instead, for the moment we have the usual NATO warmongering —remixed.

© Flickr / U.S. Army Europe Images
NATO General Reveals Alliance's Biggest Concern About 'Gambler' Putin
General Hans-Lothar Domröse, NATO Commander of the Brunssum Allied Joint Force Command, is convinced Russia is a “threat”; Putin is a “dangerous gambler”; and Russians “consider it possible to use tactical nuclear weapons as a way of waging a war. We [NATO] – do not.”

Herr General is, of course, lying – on both counts (that Moscow wants to use nuclear weapons, and that NATO wouldn’t). At least he was forced to admit NATO does not view Russia as an enemy, but as a potential “threat”.

The narrative remains – monotonously — the same. Earlier this month, NATO bigwig General Philip Breedlove – rather, Breedhate — accused Russia of making “irresponsible” nuclear threats. Additionally, Breedhate never misses the opportunity to coin a sound bite accusing Russia of launching the proverbial “offense” in Donbass and “violating” Minsk-2 – when in fact any offense and/or violation comes from Kiev.

NATO General Secretary, toothless Norwegian Jens Stoltenberg, also never skips the “Russia will use nuclear weapons” bandwagon. He insists NATO’s missile defense system does not target Russia (not true) and that NATO does not want confrontation (not true).

All this nuclear weapon mess is based on the Director of Non-proliferation and Control of Weapons Department of Russia’s Ministry of Foreign Affairs, Mikhail Ulyanov, saying during a review conference dedicated to the Treaty on the Non-Proliferation of Nuclear Weapons, that what Washington is cooking might – and the operative concept is “might” — lead Moscow to decide to build up its nuclear arsenal.

© Sputnik / Host photo agency
US Actions May Prompt Russia to Consider Increasing Nuclear Arsenal
The fact that Ulyanov was quick to add Moscow is not going to do it – yet – inevitably was lost in translation.

The fact also remains that while the US/Pentagon/NATO talk — or huff and puff — Moscow silently gets ready to protect Russian territory from anything the US military may throw at it, including Prompt Global Strike (PGS).

And whatever NATO’s maneuvers, Russia responds in kind, usually via surprise military drills. If NATO launches its biggest ever war game right on Russia’s borders – talk about a provocation – Moscow counterpunches with war games in the Mediterranean in close coordination with the People’s Liberation Army. Yet one more instance of the all-weather Russia-China strategic partnership.

Inevitably, the warmongering, via the Pentagon, had to extend to China. And the Global Times – certainly echoing the predominant PLA view — responded in kind, warning that “war is inevitable” if Washington doesn’t stop demanding that Beijing ceases with building artificial islands in the South China Sea.

© AP Photo / Zha Chunming
China Labels New Tension in South China Sea as ‘Old Tricks’ by West
Cue to yet another avid rumor-mongering mill, as usual turbo-capitalism suspects of the George Soros variety fan the hysteria flames of imminent war, even wondering how many nations of the fragmented “West” Washington would be able to regiment for a war not only against Russia but also… China.

And all this while NATO’s American generals cannot even convince member-nations to spend 2% of their GDP on defense.

Cue also to a tweet by John Schindler, former NSA and former professor at the US Naval War College, duly magnified by the rumor-mongering mill. Schindler claimed that a senior NATO operative (not American), told him, “We’ll probably be at war this summer. If we’re lucky it won’t be nuclear.”

So those Dr. Strangeloves in Brussels, instead of sun and fun in the Costa Brava, are “preparing” for a Brave Nuclear Summer.

Said a senior NATO (non-US) GOFO to me today: "We'll probably be at war this summer. If we're lucky it won't be nuclear." Let that sink in.

Those were the days when a direct infringement of the exceptionalist dictum — “if we don’t like you, we bomb you” — was a done deal. What’s left for NATO’s Breedhaters is just a Mare Nostrum of fear mongering.

Obama Terminates Emergency With Respect to Nuclear Proliferation in Russia