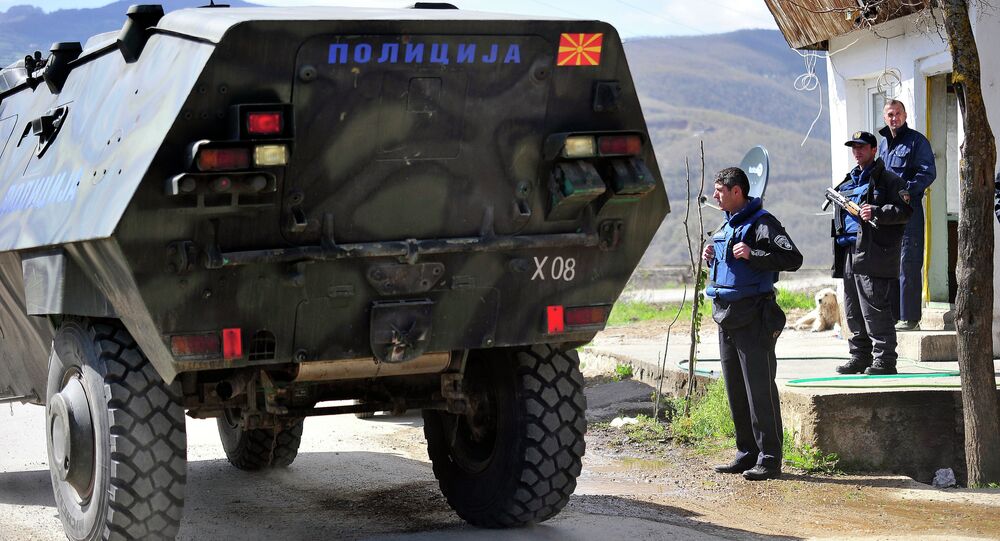 At the exact same time that Greece has received a guarantee for billions of cubic meters' worth of Russian gas, Macedonia is being rocked by the threat of a renewed Albanian insurgency designed to offset Moscow’s pipeline plans.

Gazprom CEO Alexei Miller announced that Russia will guarantee 47 billion cubic meters of gas a year to Greece via the Turkish Stream, which would then go onwards to supply the European market. While it's not yet specified exactly which path the pipeline will take from Greece to the EU, it's more than likely that it'll go through Macedonia en route to the former South Stream's envisioned Serbian hub, and thenceforth through Hungary, Austria, and beyond, just like Russia originally anticipated last year. There's one major obstacle to that strategy, however, and it's that the US is attempting to transform its failed Color Revolution in Macedonia into an Unconventional War to neutralize this geostrategic route, utilizing the specter of an Albanian terrorist campaign modeled off the Syrian template to achieve its destructive goals.

From Color Revolution to Unconventional War

In the years since the War on Yugoslavia, the US has perfected and patterned a novel method of regime change that proceeds according to pre-established escalation checkpoints. Washington first issues either a direct or implicit/covert ultimatum to the targeted government, the rejection of which serves as the ‘dog whistle' for activating the dormant Color Revolution social infrastructure present in the country. Should that plan come to fail, then some of the associated destabilizing actors are transitioned into launching an Unconventional War. The final step, should that fail and a Great Power doesn't diplomatically intervene (as Russia did with Syria in September 2013), is to repeat the Libyan Scenario of a conventional intervention that leaves no doubt as to the success of its regime change odds.

Adapting this template for the Macedonian application, it can be seen how the country has thus far successfully repelled the Color Revolution attempt by Zoran Zaev, which in turn led to concrete Russian investment in the country's pipeline infrastructure that set the stage for the Putin-Tsipras agreement earlier this month. Now that the Balkan Stream pipeline plans are rapidly gaining traction, the US realized that it needs to act quickly to in order to sabotage them, hence the sudden reemergence of Albanian terrorism in Macedonia. While this problem was previously so serious as to push the country near civil war in 2001, it's generally subsided since then, with only a handful of extremists unhappy with the generous Ochrid Agreements that guaranteed the Albanian minority vast political and social rights. Nonetheless, that hasn't stopped the country of Albania, the US' regional Lead From Behind proxy, from threatening regional destabilization in order to create Greater Albania.

An international scandal rocked the Serbian capital of Belgrade last fall when Albanian nationalists used a drone to fly a Fascist-era Greater Albania flag through a football stadium during a heated match, threatening to rekindle ethnic tensions that had long remained on edge in that corner of the Balkans. The provocation thankfully didn't result in any deaths, but it did raise fears that the same style of World War II historical revisionism from Ukraine was slithering down to the Balkans with implicit US strategic support, opening up a new geo-ideological front in the New Cold War. Earlier this month, Albanian Prime Minister Edi Rama confirmed that Fascist-era thinking is indeed alive and well in Tirana when he officially pushed for the creation of Greater Albania. He spoke of his country's plans to annex the Serbian Province of Kosovo (which he calls "unification"), saying that it was "inevitable" and "unquestionable", and that the only question is "Will it happen in the context of the EU as a natural process and understood by all, or will it happen as a reaction to EU blindness or laziness?" The Serbian government rightfully responded with indignation, warning Albania against "banging the war drums" and saying that the two entities would "never unite".

This was just the opening salvo of Tirana's regional agitations, however, as a short while later, Hashim Thaci, the former political leader of the terrorist Kosovo Liberation Army and Foreign Minister of the unilaterally self-proclaimed government of Kosovo, said he would travel to Belgrade to attend a conference he was invited to. Serbian Interior Minister Nebojsa Stefanovic warned that "If he turns up in Belgrade, the Ministry of Interior will act according to the law and bring him to justice", since Thaci had been convicted in absentia of terrorist-related offensives in 1997 and sentenced to a decade imprisonment. Not even a week later, about 40 individuals identifying themselves as members of the thought-to-be disbanded Kosovo Liberation Army, the same group that Thaci himself once led, crossed over from Kosovo (now under NATO occupation and no longer administered by Serbia) and raided a Macedonian police post near the border. They took a couple police officers hostage and ominously declared that "We will have an Albanian state", before scurrying back to their NATO protectorate after a few hours.

Thus, just as Albanian nationalism threatened to make South Stream a pipedream, so too does it seem poised to do the same with Balkan Stream, as in the course of only six brief months, Albania and its Kosovo satellite have shockingly:

* Flown a Fascist-era flag over Belgrade;

* Openly declared their intentions to unilaterally impose a Greater Albania on the Balkans;

* And staged a violent border incursion into Macedonia.

The most destabilizing aspect is that the US, EU, and NATO haven't condemned any of this whatsoever, and in fact, Albania and Kosovo enjoy de-jure and de-facto NATO support, with the former being an official member and the latter being occupied by one of the US' largest bases in Europe, Camp Bondsteel.  These disturbing facts reveal implicit Western support for Albanians aggressive actions, adding credence to the analysis that they are indeed being coordinated by the US in order to sabotage Russia's Balkan Stream project.

* Here's what to monitor as the situation further develops:

* Albanian/Kosovar/NATO/US military reactions and official statements to the terrorist incursion (whether in Macedonia and/or Serbia);

* The loyalty of Albanian political parties to the democratically elected government of Macedonia;

* And the ‘second wind' potential of the Macedonian Color Revolution and its possible transformation into a EuroMaidan-like meltdown.

Other than the possible disruption of Balkan Stream's construction and the violent formalization of Greater Albania, the consequences of renewed ethnic destabilization in the Balkans could include:

* A strengthening of Serbian-Macedonian ties centered on shared victimhood;

* The threatening of China's Balkan Silk Road plan for high-speed rail from the Greek port of Piraeus to Budapest (via Macedonia and Serbia);

* And subsequently, possible Chinese shadow mediation at settling the conflict before it spirals out of control.

Finally, be on the lookout for US/EU ‘mediation' attempts that are nothing more than ‘good cop' diplomatic tricks to pursue their ‘bad cop' geopolitical designs. Also, be wary of any initiative or statement that could be interpreted as a subversive invitation for US/NATO military intervention in Serbia and/or Macedonia.