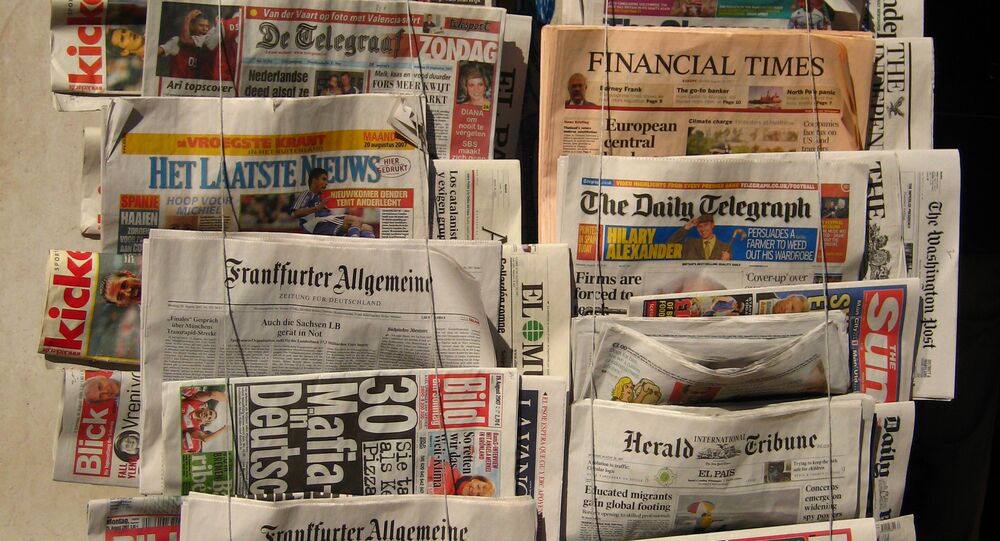 The frantic spell of Western media behaviour could be a case-study in how it is centrally manipulated with a political agenda and thought-control. Editors at major Western media corporations are evidently following a political line cast by Washington and its European allies.

The multi-billion-dollar Western news media networks are replete with an unquestioning, unwavering anti-Russian agenda. This agenda is recklessly inflaming international tensions to the point of inciting further conflict and even an all-out global war.

The roll of dishonour includes "stellar" corporate names, from CNN, New York Times, Washington Post, BBC, Financial Times, Guardian, France 24, Deutsche Welle, and many more. It is a veritable troll army marching in lockstep with their governments' agenda of disinformation.

© Flickr / Reid Rosenberg
America Goes Large: Obama Wants Huge Budget for His Anti-Russian Troll Army
In unison, they are functioning as a global ministry of propaganda.

Reputable Russian news media have not indulged in the unquestioning Western narrative asserting that Russian aggression is the cause of the entire Ukrainian conflict. In other words, the Russian news industry is providing proper journalistic services.

Russian media do not talk blindly about Russia's "annexation of Crimea". Russian media have refused to toe the Western media line that, against voluminous evidence, denies the Neo-Nazi character of the Western-backed Kiev regime. Therefore, the Western reasoning goes, the Russian media are a Kremlin propaganda tool and Moscow has despatched a "Troll Army" to disseminate disinformation. How richly ironic is that?

Typically, Western claims of "Kremlin propaganda" are just more assertion layered upon assertion, unsupported by any evidence. The "evidence" is simply that the Russian media do not peddle the mainstream Western viewpoint. So with totalitarian-like mentality, the Western conclusion is that Russian media "must be" propagandist.

© Sputnik / Ilya Pitalev
Are You Scared Now? Congress Declares US Losing Media War With Russia
A US Congressional hearing last week tendentiously described how Russia is "weaponising information" and declared that Russia is "winning the information war". No evidence is presented, just more provocative assertions piled up on more provocative assertions.

Paradoxically, the charge of propaganda and media trolls is actually substantiated if applied to the gamut of Western corporate news media.

We are not talking about clandestine media impostors, bloggers and cyber-trolls on the payroll of the CIA or MI6 who infest the media. We are referring to the entire professional media industry — a multi-billion-dollar global industry.

Examples abound. Look how the Western media — lock, stock and barrel — went into a collective hysteria over the public absence of Russian President Vladimir Putin last month. It's astoundingly weird when you look back at that frenzied episode.

Putin returned to normal work after not being seen in public for over a week, and he has since continued presidential duties, brushing off the brouhaha. Likewise, the Western media seem to have forgotten their fit of madness, even though at the time American and European outlets had gone into a paroxysm over Putin. The madness has subsided, but only a few weeks ago, the Western news media were uniformly transfixed with feverish rumours and speculation on Putin's absence. Was it a "palace coup?" or "was he dead?" Was he receiving "plastic surgery?" or had his partner "given birth to a baby in Switzerland?"

This frantic spell of Western media behaviour, based on that incident alone, could be a case-study in how it is centrally manipulated with a political agenda and thought-control. Editors at major Western media corporations are evidently following a political line cast by Washington and its European allies. That line is: demonise Putin and destabilise Russia. It may be a subtle form of control, and partly also down to lazy follow-the-herd editorial instinct, but nevertheless the behaviour amounts to spectacular control. And this in a supposedly "free thinking, independent" industry.

Or take the assassination of Russian opposition figure Boris Nemtsov in Moscow last month and then this week the spate of assassinations in the Ukrainian capital Kiev. When Nemtsov was gunned down near the Kremlin again the Western media went into frenzied overdrive, as did Western governments. Wall-to-wall "coverage" played allegations and speculation that somehow the shooting was carried out by the Russian authorities to silence a dissident voice.

US President Barack Obama's calls for a "transparent criminal investigation" were amplified by Western news outlets who openly speculated with unabashed sensationalism that Putin "may have ordered the contract-killing".

The US State Department's "deputy for coups" Victoria Nuland, while testifying before Congress about "thousands of Russian troops having invaded Ukraine", also presumed to interfere in Russian internal affairs when she "demanded" a criminal probe into the Nemtsov shooting "that meets international standards" to "find the shooter and who ordered it". The latter was a scurrilous swipe at Putin.

Contrast that hyped-reaction with the relative dearth of concern over the contract-killings of three opposition figures in Kiev this week.

One of the victims was well-known newspaper editor Oles Buzina; the other was a former senior lawmaker in the Ukrainian parliament. All victims had been outspoken and effective critics of the Western-backed regime. Their killings follow a spate of at least four other suspicious deaths among opposition figures associated with the ousted government of Viktor Yanukovych, who was deposed last February by Western-backed Neo-Nazi demagogues and their SS-styled paramilitaries.

Those combined deaths point to an orchestrated campaign of political murders to snuff out critical voices.

© Sputnik / Natalia Seliverstova
Extraordinary Double Standard: West Silent Over Murders of Kiev's Opponents
However, the Western media's response to the political killings in Kiev, compared with the shooting of Boris Nemtsov, has been studiously muted. There are no high-profile calls for "transparent investigations" and no innuendoes against the Western-backed President Petro Poroshenko, or other members of the Kiev regime.

Indeed, the Western media in its relatively scant coverage of the recent Kiev killings have perversely inferred that the victims were either deserving of their fate, or that the murders were carried out by Russian agents in a bid to smear the Kiev regime and further destabilise the country. Talk about not dealing with the facts!

France 24's correspondent Gulliver Cragg told the news anchor in Paris that his Kiev "sources" described the victim Oles Buzina as a "polemicist" (inferring trouble-maker) and that it was "wrong to even describe Buzina as a journalist".

That broadcast by France 24 is a disgrace to journalism, ethics and international law. In effect, it purports to say "Buzina deserved it".

By the way, it is by no means the first time that France 24's Gulliver Cragg has acted as a shameful mouthpiece for the Kiev regime. Back in May last year following the murder of more than 40 people in the Odessa Customs Building massacre, he alluded to claims that those killings may have been carried out by Russian agents to blacken the Kiev regime. Again, in complete denial of the facts that implicate the Kiev regime as the perpetrators.

Which brings us to the Financial Times' spin on the latest assassinations in Kiev. Its report quotes Kiev's interior ministry advisor Anton Geraschenko as claiming that the "murders were organised by Russian intelligence agencies to create an atmosphere of terror and hysteria in Kiev".

From a Kiev ministry figure that's hardly a statement adhering to "international standards" of criminal investigation.

Additionally, the London-based FT prominently quotes the president, Poroshenko, as suggesting that the killings were also sanctioned from Moscow. With incandescent rage, Poroshenko says that the shootings "played into the hands of our enemies… aimed at destabilising the internal political situation in Ukraine, at discrediting the political choice of the Ukrainian people."

Neither France 24 nor the Financial Times quote people who could more plausibly claim that the murders were the dirty work of the Kiev regime.

© Sputnik / Konstantin Mihalchevsky
Ukrainian Internet Army Report Card: 'A' For Effort 'F' For Achievement
We pick those two media outlets merely as examples of the general Western response, not only on the topic of political assassinations in Kiev but on the whole Ukrainian conflict.

Western media may pride itself with vain self-congratulating descriptions of "independent news, freedom of thought and expression, fearless defenders of truth" and so on. But the truth is that Western corporate so-called news media are simply this: one giant troll army marching in lockstep with the political agenda of Washington and its coterie of Western allies.

Ukraine and Russia are merely one manifestation among many of the Western media's total propaganda function. That function has been around for decades, but it is only now becoming abundantly transparent.