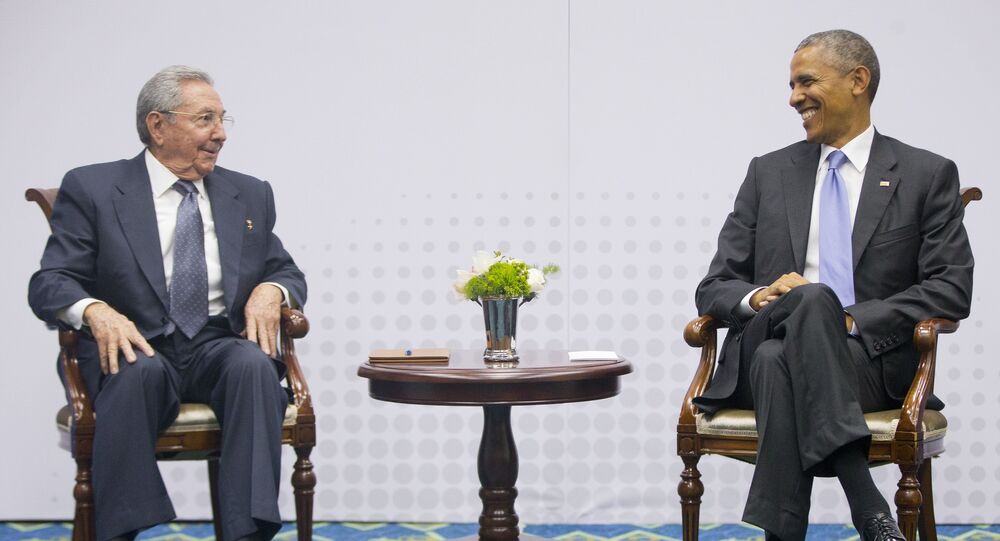 The mere fact that a US leader - the first in 11 consecutive presidents - should condescend to shake the hand of the Cuban head of state is not really anything to get too excited about.

With respect to Cuban leader Raul Castro, his reported assessment that American President Barack Obama is "an honest man" is way off the mark. President Castro — the younger brother of ageing Fidel — spoke those flattering words at the Summit of the Americas at the weekend.

Obama and Castro reportedly met for one hour on the sidelines of the conference in Panama during which they made "an historic handshake" amid flashing cameras.

A brief handshake had actually occurred earlier, more than a year ago, when the two leaders met fleetingly during the funeral of Nelson Mandela in South Africa.

But at the weekend in Panama, it was the first time in more than 50 years that an American leader talked in person with Cuba's revolutionary leadership, either under Raul or under the much longer rule previously of Fidel. Fidel, now aged 88, stepped down from power a few years ago due to ailing health.

One wonders what could have persuaded Raul Castro to give such a glowing account of his American counterpart? Obama, honest? A man to do business with?

© REUTERS / Jonathan Ernst
Historic Meeting Between US and Cuba: New Period in Countries’ Relations
The mere fact that a US leader — the first in 11 consecutive presidents — should condescend to shake the hand of the Cuban head of state is not really anything to get too excited about.

Nor is "talk" from the American White House that it is considering removing a slew of trade and diplomatic sanctions off Cuba. Talk is cheap. And nobody talks more cheaply than Obama — the warmongering, drone-assassinating Nobel Peace Laureate.

Obama in his usual grandiloquent rhetoric hailed the meeting with Raul Castro as "an historic turn for US-Cuba relations". Obama went on to say that the apparent rapprochement signalled that the "Cold War is over" and that it marked the "end of Washington's meddling in Latin America" — "Those days are over," added the American Commander-in-Chief.

For a start, the image of Obama acting as some kind of benevolent American leader working to "normalise" relations with Cuba needs to be knocked on the head. The fact that the occupant of the White House should bring himself to shake hands with Cuba's president is not something to celebrate and congratulate about.

Washington has been waging a criminal economic war of aggression on Cuba since 1960 following the socialist revolution in the Caribbean island that kicked out a despotic American-backed dictator, Fulgencio Batista. It was the US that launched the aggression on the impoverished island only 90 miles from the Florida coast. That hostility went way beyond a blanket trade and financial blockade; it also involved covert terror campaigns against the Cuban people, including assassination plots against the Castro brothers and other figures in the leadership, poisoning of agricultural crops vital to the economy, and the shooting down of civilian airliners.

The most notorious criminal intervention was the CIA-backed Bay of Pigs invasion in 1961, which President John F Kennedy signed off on, but which ended in disaster when the Cuban revolutionaries routed the offensive.

Cuba's subsequent political and military alliance with the Soviet Union was thus a response to US state terrorism and constant threats to bomb and invade the country — to "restore order" — Orwellian language for reinstalling an American puppet-regime that would facilitate corporate profiteering and return the island to its former status as a prostitution and drugs resort for American businessmen and crime syndicates.

Over the decades, the Cuban economy and its 11 million people have been deprived of billions-of-dollars-worth of income due to the illegal American blockade. Recently, for example, the Greek government of Alexis Tsiprias has billed Germany for $300 billion for reparations incurred during five years of Nazi occupation. Just imagine what Cuba could be entitled to in reparations for five decades of unrelenting American aggression.

Obama speaks with his usual florid lexicon about "an historic turning point". But the fact is that the US still maintains its economic stranglehold on Cuba. This American boot on Cuba's neck has been condemned around the world in the forum of the United Nations General Assembly and among Latin American nations. Yet still the American boot remains firmly in place. Obama will be long out of White House and the gung-ho US Congress will ensure that the strangulation of Cuba will continue.

Also, White House officials at the weekend would only say that they are "contemplating" taking Cuba off the official US state-terror list.

Don't hold your breath on that issue either. That list includes Iran, North Sudan, Syria and Cuba. This is another gratuitous insult and act of aggression by Washington considering the laudable past record of Cuba's solidarity with other revolutionary movements in Latin America and Africa in the face of American imperialist attack; the American blacklisting of Cuba is also a mockery of Cuba's distinguished humanitarian and medical aid to countries hit by natural disasters, such the Ebola disease in West Africa last year or the earthquake that devastated Haiti at the end of 2010.

© Flickr / Day Donaldson
US-Cuban Relations in 20th Century: Facts and Figures
So, the upshot is that Washington is really giving nothing of substance to Cuba, except a few minor tokens of "normalisation" such as opening an embassy in Havana and easing up restrictions on travel and cash remittances from expatriates. Cuba is being afforded "photo-opportunities" while the island still remains, and will for the foreseeable future, under American domination.

Obama is not changing American policy in any fundamental way — despite the bombastic rhetoric. The US is still shamelessly behaving as terrorist state towards Cuba. What Obama seems to be seeking is merely a superficial change that bestows on him a vainglorious legacy of "historic presidency".

He may mouth about "no more meddling in Latin America". But the reality is that Obama's White House has in recent weeks unilaterally slapped sanctions on Venezuela, and has declared that state a "national security threat" while it is Washington that has sponsored a covert campaign of destabilisation under the guise of a "colour revolution". A petition signed by 10 million Venezuelan citizens has condemned Washington's subversive aggression, as have other Latin American countries belonging to the Mercosur trade bloc and the Bolivarian Alliance  of Latin American Peoples (ALBA).

Last year, the Bolivian government re-elected President Evo Morales was forced to expel US ambassador Philip Goldberg for "conspiring against democracy and sowing division within Bolivia". Goldberg was accused of orchestrating violent protests and sabotage of public property — a formula straight out of the CIA playbook for fomenting regime change, as seen elsewhere, in Cuba, Syria, Venezuela and in Ukraine's Maidan protests during 2014.

Obama, ludicrously and mendaciously, "assures" Cuba that the "Cold War is over" just because a condescending photo-opportunity is granted from the Terrorist-in-Chief.

Meanwhile, the US under Obama is pushing for the biggest escalation of NATO military provocations against a Washington-sanctioned Russia.

That reckless escalation is more than a turbo-charged reprise of the Cold War; it is threatening to plunge the entire world into a cataclysmic war.

Whatever Obama says, the unerring rule is to conclude the opposite.

This is not a man of honesty, integrity or peace. He is a pathological liar in the service of US warmongering.