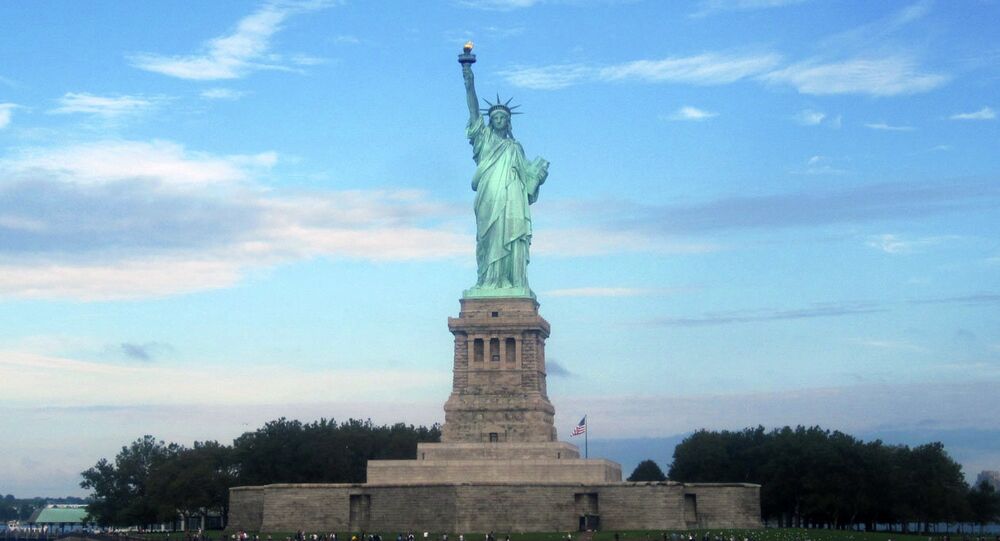 If Obama's words are anything to go by, among America’s worst enemies are ISIL, Ebola, Iran and, of course, Russia which sometimes is even mentioned as enemy number one in this context, primarily meaning, of course Russia’s President Vladimir Putin.

Ironically, in a recent poll, over a third of the Republican Party members named none other than US President Barak Obama as the biggest threat to America.

The latest events in the Middle East, and also the presidential election campaign now gathering momentum, force the Republicans to try and prove that Obama's foreign policy has failed dismally, and thereby reduce as much as possible the electoral chances of Hillary Clinton, the most likely Democratic candidate.

© AP Photo / Wael Qubady
US to Take Action if Iran Tries to Destabilize Middle East - Kerry
"Total chaos" is how many Congress members, Republicans and Democrats alike, most often describe the current situation in the Middle East. The media seem to concur.

In this chaos neither politicians, nor generals, nor yet even the wisest military analysts can confidently say who is a friend and ally, and who is the enemy. It just so happens that one of America's certain enemies, Iran, is helping us in the fight against the Islamic State, while at the same time supporting the leadership of Syria and Shiite rebels in Yemen who have overthrown pro-US President Abd Rabbuh Mansur Hadi.

In Syria Washington supports the so-called moderate rebels, intent on overthrowing President Bashar Assad but these “moderates”, however, center around the terrorist group Al Nusra, an al-Qaeda subdivision. Thus al-Qaeda, which was only a short while ago considered to be America's chief enemy, is becoming almost as good as an ally.

In the recent talks on Iran's nuclear problem it was our top enemy Russia who was a key and a constructive player without whom the problem simply cannot be solved. Even US State Department spokesperson Marie Harf said that Russia played an important role in reaching the framework agreement with Iran.

All of this is unfolding against the backdrop of tough sanctions imposed on Russia. With these, Obama hopes to destroy Russia's economy and achieve a change in leadership. Yet these policies have failed to achieve any of these goals. Besides, some European countries are beginning to protest against the sanctions – which hurt their own economies, not just Russia’s.

© AP Photo / Ebrahim Noroozi
US, World's Biggest Bully, Must Be Isolated by Its Allies – Eric Zuesse
In short, the problems are snowballing, and it looks like some people in Washington have started to search for better ideas. Last week in Congress, where until recently anti-Russia resolutions were churned out one after another, one of the most prestigious Senate halls was lent to US “dissidents” who explained in so many words to those present that the White House Russia policy was all wrong.

Dana Rohrabacher, a Congressman from California, and Ronald Reagan’s speechwriter, stated clearly that instead of fomenting anti-Russian hysteria, Obama would do well to start talking to Putin at once, find a diplomatic solution to the Ukraine crisis, and reach an agreement on joint operations to fight radical Islam.

Other prominent political observers, journalists and even former CIA and Pentagon analysts also criticized the White House policies and their own colleagues. It was said that these policies were dangerous and detrimental to the United States itself, as they could cause direct military confrontation with Russia, not excepting nuclear strikes.

Characteristically, during a recent voting on lethal weapons deliveries to Ukraine, as many as 48 Congressmen spoke out against such deliveries.

Previously, such voices were few and far between. Obviously, this is far from a substantial opposition as yet, but the tendency is there all right.

© Flickr / ManOnPHI
US Firearms Industry Sees Unprecedented Surge Under Obama
According to information from reliable sources, a fairly influential group of Republicans is soon to make public its view of cardinal changes in US foreign policy. Russia will be offered certain compromise options for settling the Ukrainian crisis in exchange for support in the fight against terrorist threats.

The names of those potential presidential candidates who will dare voice these ideas are not being disclosed now, as it takes considerable courage to do that. Yet the one who will risk it will most likely earn quite a few political points.

America is weary of its endless wars, and a war with Russia is the last thing anyone might want. It is the time for Obama instead of sabotaging the upcoming celebrations of our joint victory over Nazi Germany in WWII to make a phone call to Putin with the offer of a reasonable compromise on Ukraine. This would not only highly benefit both our nations and mankind but undoubtedly would also boost Obama’s legacy which is presently based on a very shaky ground.