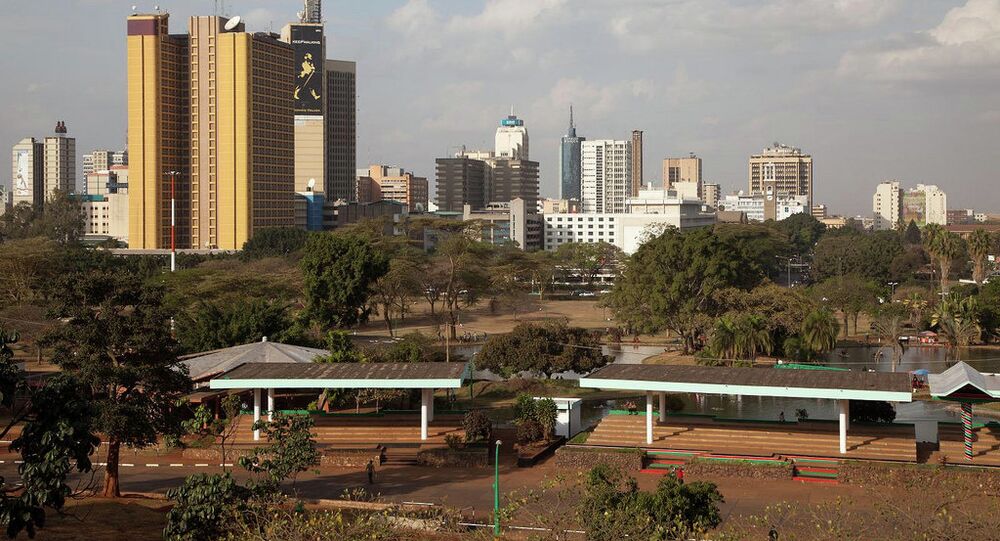 The Sino-American Competition For Kenya

The US and China's competition for influence in Kenya raises interest in the country's overall significance in 21st-century geopolitics.

Last weeks' horrifying terrorist attack in Garissa propelled Kenya to the forefront in the War on Terror for the second time in under two years. In September 2013, al-Shabaab carried out the unforgettable Westgate shopping mall attack, showing that the recent tragedy is merely a continuation of their established intentions. Raising the urgency of the situation is that the terrorist group just threatened that "Kenyan cities will run red with blood", indicating that a prolonged terrorist struggle is imminent.

© AP Photo / FARAH ABDI WARSAMEH
Al-Shabaab: Who Are They and What Do They Want?
But Kenya is important to more than just terrorists, as President Obama's insistence on still paying his first-ever visit there in July attests. The US used to be Kenya's main international partner until 2013, when it said that the election of President Uhuru Kenyatta would have "consequences". Kenyatta is one of the sons of the country's founding father and was previously charged by the ICC with crimes against humanity for the 2007 electoral unrest that swept the country. In the short time since, East Africa's largest economy has become indebted by over $1 billion to China, now its largest lender, which generously provided the funds to assist with various infrastructure and environmental projects.

The US and China's competition for influence in Kenya raises interest in the country's overall significance in 21st-century geopolitics, and the following three reasons are why the country is so important nowadays:

First off, Kenya's relationship with Somalia and its people needs to be addressed from the get-go. The former Northeast Province (in which the Garissa attack took place) is heavily populated by ethnic Somalis and remained part of post-independence Kenya owing to the legacy of British Colonialism. It had previously been the scene of the failed Shifta War during the 1960s when the area's residents fought against Nairobi in order to join Somalia.

Kenya's previously close relationship with Ethiopia grew even stronger as a result of this, since both countries have significant ethnic Somalis within their border (thus posing the same secessionist risk), and they concluded a mutual defense agreement in 1964 which still remains in effect today. It's notable then that these two countries have been the ones to take the lead (alongside Uganda) in militarily intervening in Somalia, essentially becoming the US' Lead From Behind partners in the Horn of Africa and earning the eternal hate of al-Shabaab.

Kenya's ties with Ethiopia go beyond the military sphere, since Nairobi aims to become the transport hub for Addis Ababa's expanding exports. The Lamu Port and South Sudan Ethiopia Transport (LAPSSET) Corridor aims to link those landlocked regional economies and their resources to the global market, and will even include a pipeline from oil-rich South Sudan and the newly discovered fields in Northwestern Kenya to the Indian Ocean coast. China is directly involved in this project after having won a nearly half-a-billion dollar deal to develop three docks in Lamu, which likely foreshadows Beijing playing a key role in multidirectional trade along the corridor in the future.

Kenya's hub-like role also extends into Uganda via the modernization of the Northern Corridor, a road and rail infrastructure project that eventually hopes to reach as far as the northeast region of the Democratic Republic of the Congo (the resource-wealthy areas of which are currently controlled by Ugandan militias). Suffice to say, China is helping to build this as well, and it's probable that the completed complementary transport networks will form the basis of an East African Silk Road.

Kenya is one of the founders of the East African Community, which also includes Uganda, Rwanda, Burundi, and Tanzania, with plans for South Sudan to join in the near future. The ultimate goal of the organization is to create the East African Federation (EAF), a unified political and economic entity that would represent the first comprehensive integrational attempt on the continent. Numbering around 150 million people, it would also be the second most populous state in Africa, slightly behind Nigeria. Therefore, developing strategic relations with Kenya, the proposed federation's largest economy, can assist in gaining influence within the entire entity in the future, with all of the resultant market advantages this would entail.

It's thus useful to briefly conclude with an outline about the configuration of the EAF, which will assist one in getting a better idea of the competing internal interests within the organization that will most certainly be exploited by either the US or China in the midst of their continental rivalry:

Kenya wants to serve as the economic conduit for South Sudan, Uganda, Rwanda, and Burundi, as well as for the non-member states of Ethiopia and the Democratic Republic of the Congo (DRC), the latter of which has many minerals that are needed to create today's high-tech cell phones. Tanzania, on the other hand, is investing $14.2 billion to create its own railroad through all of those exact same states except for Ethiopia and South Sudan, in what is a clear attempt to rival Kenya as the region's infrastructural lifeline. The infrastructural differences between the two wannabe hubs is that Kenya will connect to Ethiopia and South Sudan, while Tanzania is modernizing its existing Chinese-financed railroad through copper-rich Zambia. It's unknown at this stage which state will come out on top, but it's clear that they're neck-and-neck in competing for the title of the EAF's most important economic gateway.

Uganda represents the most ambitious military in the entire federation, having recently deployed its forces in the Central African Republic (ever since the American-supported ‘Kony 2012' campaign), the DRC, South Sudan, and Somalia, in a series of moves which shows that its military influence is disproportionate to its tiny geographic size. The country is also the most eager to fast-track the EAF integration process, which might indicate a desire by President Yoweri Museveni, the longest-serving leader of the EAC and in office since 1986, to acquire pre-eminent political status for him and his country within the bloc. Be that if it may, despite its strong military and dominant control over the DRC's most valuable minerals (as well as its own prospective oil reserves), Uganda is still ultimately dependent on either Kenya or Tanzania to reach the wider international market, an inconvenient geographic fact that may hinder its far-reaching political objectives.

One of the most likely forecasted problems that can spell the end of the EAF's integration could occur over the bloc's armed forces. There's no word on whether all the member states will have to pool their militaries together, or on if the federal structure will have the final say on how member states' forces are deployed. Additionally, as regards Uganda, its military aspires for regional leadership, and thus, it and its militia proxies may butt heads with their Rwandan counterparts in the DRC, which would thus put it in a crisis situation with a fellow member state. Also, Uganda's overzealousness in militarily defending its interests in South Sudan might make other members uncomfortable or unwilling to support it, especially Kenya, which has close ties with Ethiopia, who is also competing with Uganda for influence in the country.